Many who attended public information session opposed camp south of Squamish
Jun 4, 2019 10:05 AM By: Steven Chua 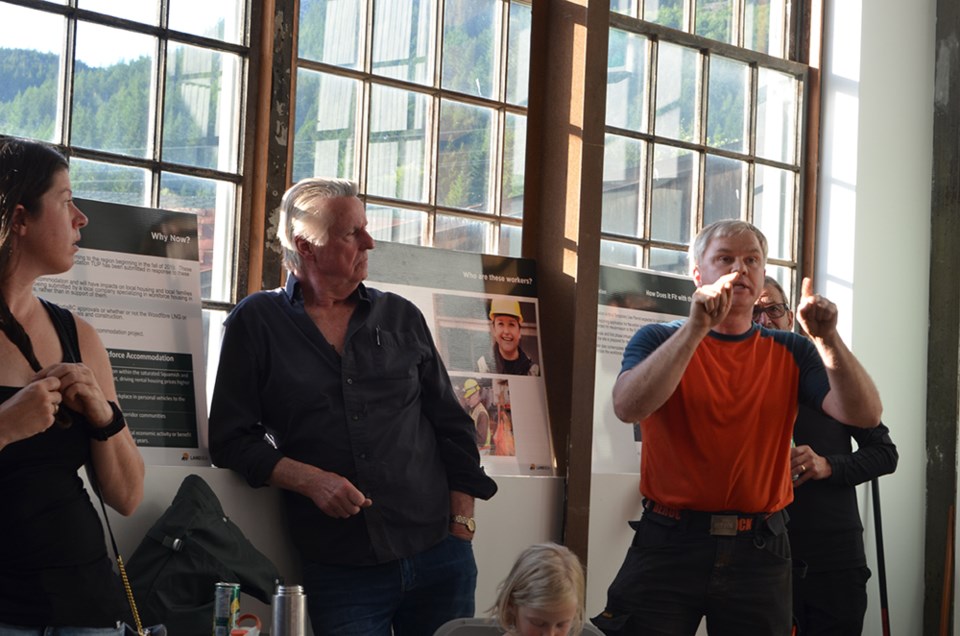 Many at the meeting, including this audience member, oppose the work camp.Steven Chua

Again, more of the same.

The Britannia residents who attended the second public information session regarding a proposed temporary work camp in the area re-aired their misgivings about the project.

The Squamish-Lillooet Regional District is processing an application from LandSea Camp Services for a proposed 500-worker camp in Britannia South.

If granted, the company would obtain a three-year temporary use permit to set up the camp in the Tigerbay — formerly known as the Taicheng or Makin — lands. After that term, the SLRD may opt to renew the permit for another three years.

The board has not made a decision on the project. At the moment, they are awaiting an opinion from the provincial Environmental Assessment Office.

At the public information session held on June 3, in the Britannia Mine Museum's Mill Room, most of the seats were filled and some people were standing on the sidelines.

Many of the complaints were similar to the concerns previously brought up at an information session months ago.

Safety, population size, location, sewage and substance abuse were once again brought up as potential problems that formed the arguments for those opposed. That group was making almost all the comments during the meeting.

Again, the debate also included elements of the Squamish Nation's ancestral claim to the land.

"I hear and I know the frustration," said the Nation's hereditary Chief Dale Harry, who supports the project. "Not in my backyard…. But we never had that opportunity."

"Do you think the Squamish Nation, or the Tsleil-Waututh, or the Lil'Wat, or the Sechelt would've gone out and said the same thing as you guys did, right?" Harry said.

"I'm not racist," said Anna Tarnowski after the meeting. "But I do feel here that they're using First Nations as a leverage to get this passed through."

"Just because they were screwed over by people doesn't mean we should be," Tarnowski added. "I know that's going to come across all wrong, but it's not right he's saying that we should take it because they took it."

Once more, LandSea reiterated that the work camp was a project that would alleviate a housing crisis that would be exacerbated by a flood of workers entering the rental market, especially those coming to work on the Woodfibre LNG facility and its associated Fortis project.

LandSea also pointed to Woodfibre's recent leasing of a portion of Squamish's Sirocco development as proof that workers were starting to displace accommodations meant for locals.

Also a point of discussion was whether LandSea's project was tied to the Woodfibre and Fortis project.

LandSea is not affiliated with Woodfibre LNG nor Fortis, but is hoping to attract their business by offering housing to their workers.

"This private business venture is not going to be built on speculation, so before the first hammer is swung into the ground, LandSea will need a commitment to some level of units, just like a developer would never build a project until there's some level of purchase," said Cameron Chalmers, a consultant working on behalf of the company.

That doesn't necessarily mean the camp is tied to those company's projects, he said. Chalmers also said that the Woodfibre and Fortis projects would go through regardless of whether LandSea's camp was successful.

Many attendees once again wondered why the camp couldn't be closer to Woodfibre or on its actual site.

LandSea president Mike Coyne said the Britannia location was ideal, because it could allow the company to serve other projects in the region.

He said employers from the Newport and Furry Creek developments, as well as projects in North Vancouver and Sechelt may use the LandSea camp.

However, Tracey Saxby of activist group My Sea to Sky said LandSea is more dependent on Woodfibre and Fortis than they have represented themselves to be.

"They have contrary statements that they've made," said Saxby.

She said noted that the wording of an SLRD board resolution appears to make the LandSea camp's existence dependent on the business of Woodfibre and Fortis.

The draft minutes of the SLRD's April 25 Committee of the Whole meeting say the board voted in favour of a motion that said the "issuance of a Temporary Use Permit be contingent on a finalized user agreement between LandSea and Woodfibre LNG and/or FortisBC that identifies the number of beds required, peak occupancies and maximum beds required where project schedules overlap."

Security was also an issue that residents brought forward. Some expressed safety concerns regarding workers' behaviour.

One person asked how much security would be present.

Coyne said in one of LandSea's other camps, a 200-person facility, there were two security guards on shift at a time, around the clock.

Many complained that sewage would be an issue. There were concerns about the smell as sewage trucks passed through Britannia and possible leakage on the highway.

Coyne told The Chief after the meeting that this would be a takeaway point LandSea would be working to address, though he added the transportation of material has been safe and odour-free in the past.

"I think we'll work very, very hard with the owner of the property and with the SLRD to see if we can get a line at least to closer proximity to the site," Coyne said.

SLRD chair Tony Rainbow said that after the meeting, his mind was still open to the project, but he wouldn't reveal how he would vote on the matter.