Lack of daycare spaces at a crisis point, says local mom and expert
Jun 30, 2016 6:38 AM By: Jennifer Thuncher 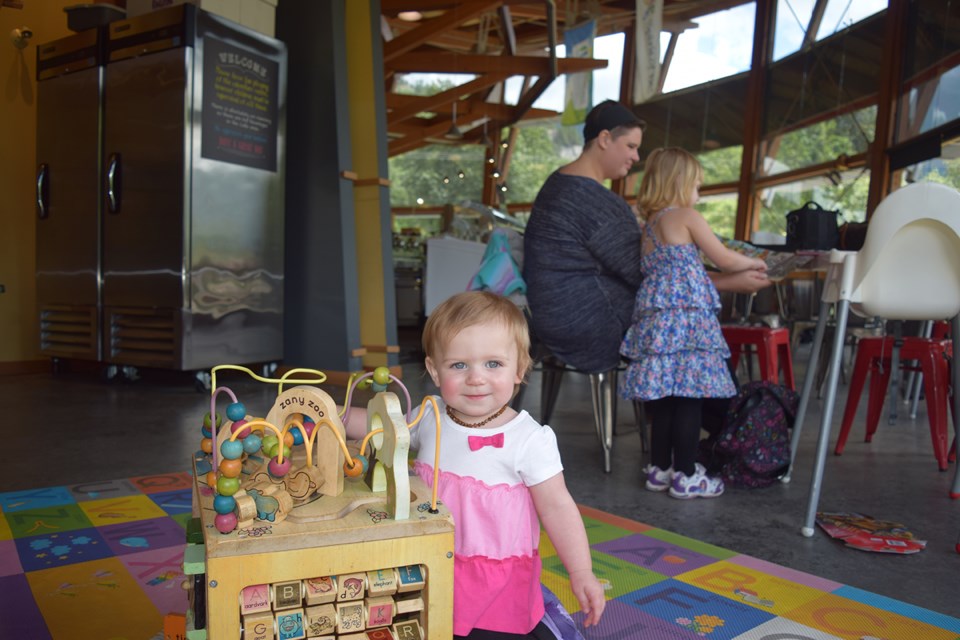 Iris Staples plays as her mom Kelly and sister Lily look at a book behind her at the Squamish Adventure Centre.Jennifer Thuncher

Squamish is gaining a reputation as a place where it is hard to find child care, according to local mother Kelly Staples.

Mother to daughters Lily, 3, and Iris, 13 months, Staples recently moved back to Squamish from Nanaimo and was shocked to discover what most local parents know all too well – quality child care spots are rare in the district.

“I can’t find child care, like at all,” she said while sipping coffee and watching her daughters look through books at the Squamish Adventure Centre.

“A couple of them have part-time space for my oldest, not a single one can take my youngest, not even one day a week,” she said.

For Chelsie Brubacher, manager of early child development services for Sea to Sky Community Services, Staples’ story is an increasingly common one. “This is definitely the most challenging year we’ve had for families finding care,” said Brubacher of her 16 years with the not-for-profit organization.

According to district planner Sarah McJannet, Squamish has 780 child care spots. That equates to about 23 spaces per 100 children from newborn to 14 years old, McJannet said, acknowledging the figures are based on 2011 census data.

Not only is child care hard to find in Squamish, what is available is more expensive than other places, according to Staples.

Full-time care for her oldest child in Squamish would cost between $1,100-$1,250 a month, according to Staples. In Nanaimo she was paying $640 a month. More expensive centres charged about $800 a month.

Frustrated by her situation, Staples set out to find out if other Squamish families were having the same issues with child care. She put out three online surveys on Facebook pages parents frequent in Squamish, such as Squamish Moms. Finding care for children from newborn to toddler is extremely difficult, according to the survey results, Staples said.

Twenty-six of the 46 respondents to the infant and toddler survey said it took more than three months to get their child into care, 20 said it took six months or longer, or they were still looking.

One issue with infant care is that extra certification is necessary to be a caregiver, Staples said.

Brubacher said while Sea to Sky Community Services centres are fully staffed, she knows other facilities don’t take as many children as they could because of a lack of trained workers.

“It is difficult in Squamish to find people with that certification,” she said. Reasons for the shortfall include that a course is no longer locally available to train daycare workers. Capilano University used to offer training but no longer does.

The wage for daycare workers, between $14-$20, makes it harder to attract new staff who can’t afford to live in Squamish with increasing housing prices, according to Brubacher.

Staples also found parents across the board were not able to find early or late child care that allowed them to commute to jobs in the city.

In her own research, Staples found the earliest care in Squamish opened at 7 a.m. and 5 p.m. was an average closing time.

Many families are split between two and three facilities, Staples said.

Stressed children can be more anxious, have behavior challenges or have a tough time sleeping, Brubacher added.

In her survey, for parents of 3-5 year olds, Staples had several respondents reply that due to word of mouth about the difficulty in finding child care in Squamish, they had either not looked, have waited and put off their search because they have been told it is impossible to find a space.

While the District of Squamish doesn’t have a specific child care strategy, staff and council have taken steps to try to help create more spaces. Recently, child care has been allowed as a home occupation in multi-unit dwellings such as in townhouse complexes and secondary suites. Parking requirements were also loosened for child care facilities within dwelling units.

In the past, little monitoring of the number of spaces in comparison to the number of children living in the district was done, but that is something district staff will work on once the latest Statistics Canada census is released.

“That is a first step so we have a clear picture,” McJannet said. She would also like to see targets set for a number of spaces to be created.

The district asks that developers of higher density developments contribute five per cent of their Community Amenity Contribution (CAC) towards child care or provide cash in lieu that the district can put toward child care.

Local governments do have a powerful lever through the land development approval process in terms of compelling developers to incorporate child care in their planning, and on the neighbourhood level through the Official Community Plan, which is currently under review, McJannet said.

“We all have a shared role in ensuring there’s affordable, quality and accessible child care,”she said.