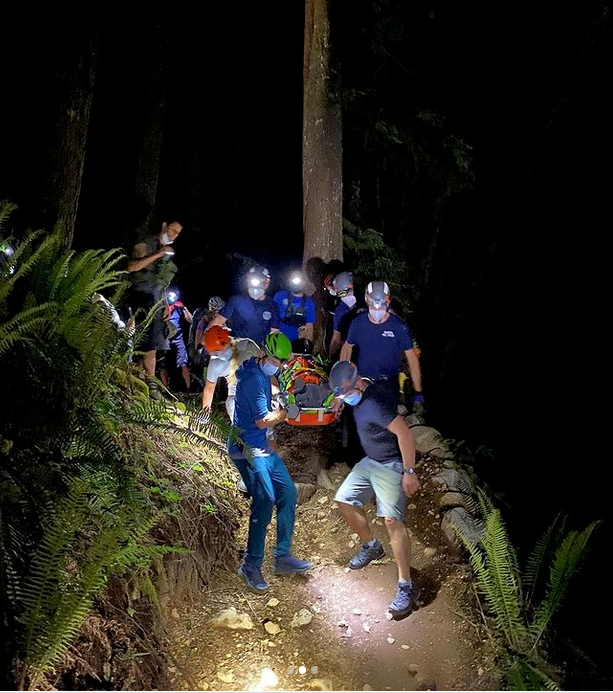 Unfortunately, this Squamish Search and Rescue mission called for a method that was more heavy-duty than a page out of MacGyver's playbook.

On June 3, at the same spot as last year, a climber was wedged into a crack and unable to get out.

Tyler Duncan of Squamish SAR told The Chief it was at St. Bernard's, a popular climb that serves as a variation to the Calculus Crack and St. Vitus routes on the Apron of the Stawamus Chief.

That climb is known for a burly 5.9 off-width pitch that often forces climbers to jam their bodies into the crack to make the ascent. However, on at least one other occasion, people have found themselves unable to get out of that tight spot.

This was the case last year, when a climber had to be rescued off that route. Crews pulled a MacGyver, using dish soap to remove her leg, which was wedged in the crack.

However, on Thursday evening's rescue, the climber was trapped so tightly that rescuers had to take a more drastic approach.

SAR manager B.J. Chute said crews "freed him by drilling and chipping away some of the rock around him."

The subject was lowered down to the ground and carried by stretcher out to paramedics.

Chute said he didn't have the most current information, but from what he knew, it appeared that the climber did not suffer any serious injuries.

But this was not the only climbing-related incident on June 3.

Shortly before the rescue on St. Bernard's, a climber took a fall at Murrin Park.

Chute said the climber fell in or around the Bog Wall area.

He couldn't confirm the exact route, but local scanner enthusiasts posted on Twitter that it was at Genesis, which is known for having no-fall zones.

Squamish SAR was called out but stood down after Squamish Fire Rescue and paramedics managed to arrive at the scene.

Rescue crews have been busy for much of late May and early June.

Squamish Search and Rescue volunteers have recorded 44 callouts this year as of June 4, which is almost double the number last year at this time.

On June 2, crews were tasked with helping a lost and dehydrated hiker at Murrin. The man went off the Jurassic Ridge trail and toward the ocean.

He was wandering for hours before calling 911.

Crews found him, walked him out and handed him to paramedics.

On June 1, a mountain biker suffered a back injury in the Alice Lake area.

The fall was on the gap jump of Pamplemousse, a black diamond trail.

Squamish Fire Rescue and SAR both responded and brought the rider to safety.

On May 31, there was a report of a whistle on the Stawamus Chief trail, but it was unsubstantiated and SAR was stood down.

The day before, a 13-year-old male rider took a fall on Rupert, a black diamond trail in the Alice Lake area.

SAR and Squamish Fire Rescue were called out, but people in the area helped him out of the trail to Perth Drive, where he was handed to paramedics. Rescue crews stood down as a result.

On May 30, rescuers came to the aid of a rider who was involved in a motorcycle crash in the Elaho Valley. That person, however, was helped out by a bystander who drove them out to an area where paramedics were able to pick up the subject. SAR stood down.

The previous day, crews received a call to help out a dehydrated male with leg cramps in Garibaldi Park, but that call was transferred to Whistler SAR.

That same day, a group of people were trying to hike up the Chief but got off-trail and wound up in the back end of Slhanay. SAR members were able to guide the hikers out of the area via phone. No field teams were needed.

On May 25, a lost male hiker at Murrin Park was rescued.

Chute said there appears to be an uptick in calls for lost hikers at Murrin Park.

He noted that SAR members have observed a number of people in the evening at Murrin without headlamps.

He said that using a phone light or having no light at all won't cut it on Squamish's trails, and noted that it's important to use proper equipment to avoid getting lost.

Chute also said that it's crucial for people who find themselves in trouble to call 911 as soon as possible.

"It's important that the first and only call be to 911 as that guarantees a co-ordinated and efficient response from all responding agencies," said Chute.

"We'd also like to remind people that search and rescue in the province is free and no recognized SAR team in B.C. would ever ask you for money upfront during or after a rescue. We don't want people to be deterred from calling 911 because they may be handed a bill. SAR teams in the province do rely on donations, but there's no fee for service in British Columbia."

***Correction June 4: The motorcyclist was driven to an area where paramedics picked the rider up. The bystander didn't drive them to the hospital.