Climber rescued from The Apron 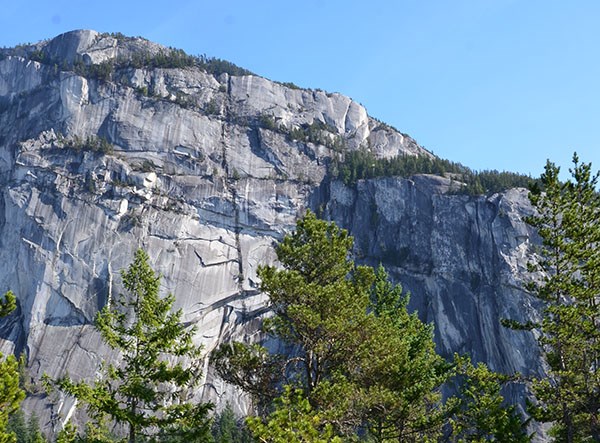 File photo A climber was rescued from The Apron on Aug. 23.

Last Saturday (Aug. 23) a helicopter was called out to pluck a climber off The Apron.

Around lunchtime, Squamish Search and Rescue (SSAR) was contacted to help a man who fell and hurt his leg while attempting to ascend Rock On. The climbing route runs up the north portion of The Apron in Stawamus Chief Provincial Park.

The climber was close to a ledge, which allowed the team to perform a long-line rescue from the helicopter. The volunteer-rescue crew and local company, Blackcomb Helicopter, have a long-standing relationship. One of the company’s pilots, Ben Hawkins, is extremely skilled at this form of extraction, Howe said.

In 2011, SSAR didn’t attend any climbing-related accidents, Howe said. Usually such incidents make up 10 to 15 per cent of the callouts, he noted.

This year has been busy for the rescue team. The number of incidents they’ve attended is higher than that of SSAR’s 10-year average.

“This year we have had quite a few mountaineering injures,” Howe said.

Last year, SSAR was the busiest search and rescue group in the province — a title that typically belongs to North Shore SAR due to the area’s population and mountains. Chilliwack is continually a close second. Its search and rescue team deals with incidents on the rivers in the area.

The SSAR advises that people going into the backcountry or onto rock faces in the area should make themselves aware of the kind of terrain and conditions they'll be facing and be prepared. Bring a cellphone, warm clothes and water, because accidents do happen.

In addition, if you'd like to donate to SSAR or join the team, go to www.squamishsar.org.