Destination BC reports back on Sea to Sky destination strategy 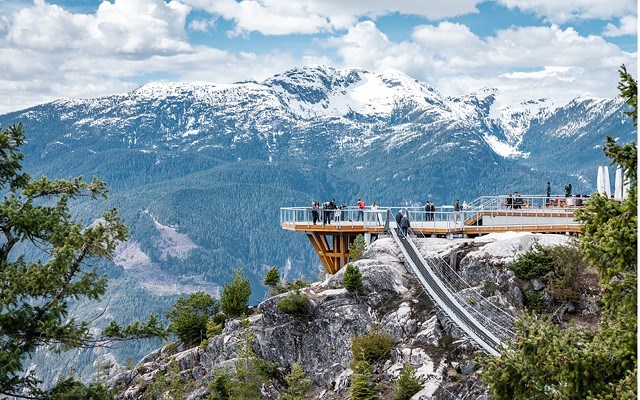 Squamish's Sea to Sky Gondola is one example of positive change that stemmed from private and public sector collaboration, said Marsha Walden, president and CEO of Destination BC at a Whistler Chamber of Commerce luncheon on July 10.Unsplash

Marsha Walden, president and CEO of Destination BC, met with Whistler business leaders last week to share the latest update on the Crown corporation's destination development strategy for the Sea to Sky.

Speaking at the Westin last Wednesday, July 10, at a Whistler Chamber of Commerce luncheon, Walden first provided an outlook on the global tourism market and the predicted slowdown in travel with economies softening around the world.

"In 2019, we expect growth in visitation to actually slow a bit to about 2.8 per cent," she said. "That's still going to set a new record for British Columbia of having 23 million overnight visitors expected here."

Visitation to the province is expected to taper for two primary reasons, Walden said: Economic uncertainty associated with Brexit in the U.K. and rising political tensions between China, the U.S. and Canada; as well as escalating travel costs.

"In some markets, this being one of them, accommodation capacity is actually becoming an issue, as is price for many of our markets," she said, adding that particularly "price-sensitive" overnight markets like Washington State are especially vulnerable to fluctuations.

"We're also seeing our international tour operators push back quite a bit on price ... I know there are a lot of hoteliers in the room and we all want to make hay while the sun is shining, but there are some cracks in how far we can push price."

Destination BC is predicting a flattening in visitation from several of the province's key markets. Chinese visitation is forecast to grow by "a fairly modest" two per cent this year, Walden said. Bookings to Canada from Australia are also "experiencing some pretty significant headwinds" due to rising airfare and hotel costs. The U.K. is pacing ahead of last year in bookings this summer, but "we are starting to hear some effects around the uncertainty of Brexit," noted Walden. Mexican visitation remains strong, but Walden said forecasts show growth should remain aligned with outbound air travel levels from the country. Closer to home, while Washington is expected to remain "fairly slow," Walden said longer-haul U.S. markets with air access to Vancouver, such as Chicago, are "performing really strongly."

As part of the development of Destination BC's 10-year provincial tourism strategy, the organization has engaged approximately 1,500 tourism partners from around the province, including hundreds in the Sea to Sky. Walden said there were a handful of key themes the corridor's leaders identified through several planning sessions and surveys, including staffing, new product development and visitor growth management.

"This strategy very much wanted to look at ways to recruit your team and train staff, and they have some specific actions that they're starting to develop around employee attraction, among other things," she said. "We want to make sure that the employees we have here are really an enviable workforce, and so the strategy and plan calls for a number of initiatives to help with knowledge building, around customer service, around sustainable practices, around talking to businesses about what a living wage means in this corridor, and finally about building an adequate inventory for affordable housing."

Walden also touched on the need to develop new tourism products to drive visitor interest, and urged collaboration between public and private sectors.

"Look at the Sea to Sky Gondola and the changes it has created in this corridor since it was introduced: [they] are significant," she said. "So private and public sector collaborations can have dramatic changes, and they don't always have to be as ambitious as something like the gondola."

On the hot topic of visitor growth management, Walden said local stakeholders "are very cognizant that we need to have a way to gain a better understanding of who's here, how they're moving around our corridor and how we manage capacity, so that the experiences they have here are the ones we intended."

Highlights of the destination development strategy can be viewed at destinationbc.ca, with the final strategy expected to go online in the coming month.