Thirty days after notice of seizure, an update from 99 North and Grass Roots Medicinal
Dec 7, 2019 11:25 AM By: Keili Bartlett 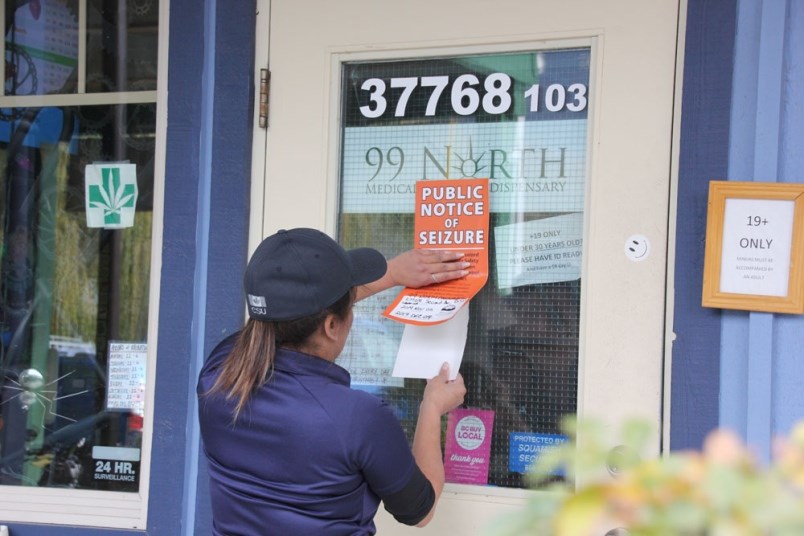 A member of the Community Safety Unit posts a public notice of seizure on the door of 99 North in Squamish on Nov. 5.Keili Bartlett/the Squamish Chief

Bryan Raiser, the owner of 99 North, said he is unable to give much of an update, but confirmed his business is still closed as of Dec. 6. Raiser said his application for a license — which he submitted in August 2018 — is still pending.

"All the outpouring of love and support is awesome," Raiser said.

As for Grass Roots Medicinal Cannabis, Nathan Lidder, the lawyer representing the owners, said what will happen next hasn't been solidified.

"Unfortunately, I don't have much new to report on that front," he told The Chief on Dec. 5. "As of right now, we're still meeting and talking about what the plan is going forward and still kind of sussing out all the options."

He couldn't go into detail about what options his client is exploring but confirmed Grass Roots will remain closed for the foreseeable future.

Via email, Grass Roots Medicinal owner Chad Jackett said, "We are awaiting our retail license that was applied for over a year ago. Unfortunately [the] government cannot tell us how long that will take. And unfortunately, that is not going to help our medicinal patients once we get our retail license."

Both businesses had product seized on Nov. 5, when CSU members posted notices of seizures — effectively temporarily closing the stores. CSU operates under the Policing and Security Branch of the Ministry of Public Safety and Solicitor General. The CSU is responsible for compliance and enforcement under the Cannabis Control and Licensing Act.

Currently, only one cannabis business in Squamish, Sky High Cannabis, has received its license.

In an email, the Ministry of Public Safety and Solicitor General said it cannot comment on specific enforcement actions.

"All along, we have aimed for voluntary compliance and have followed a path to encourage this. We have been very clear that once legal cannabis retail outlets became operational in a community — of which there is one in Squamish, in addition to BC Cannabis online stores – the illegal retailers would be shutdown," the email from the ministry read.

As of Dec. 6, CSU officers have visited more than 221 unlicensed retailers.

"Illegal retailers who do not hold a provincial licence to sell non-medical cannabis have 30 days from the time their cannabis was seized to apply in writing to the Director of the Community Safety Unit  to have it returned or to be compensated if the cannabis has been destroyed," the ministry said.

"This can be done by using the Application for the Return of Seized Cannabis. A claim must demonstrate to the satisfaction of the Director of the CSU that they were legally entitled to possess the cannabis at the time of the seizure. Illegal operators also face significant monetary penalties equal to two times the retail value of cannabis seized or proven to have been sold."