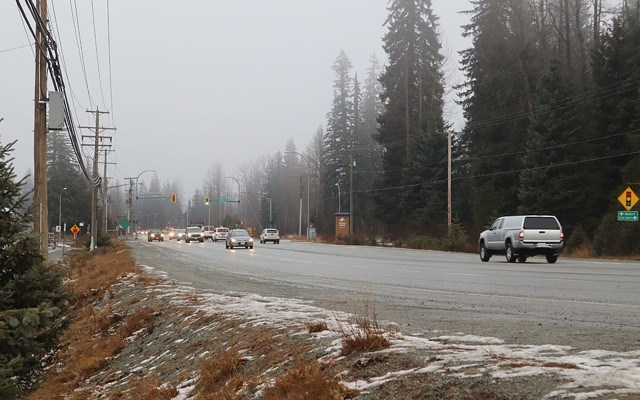 Winter conditions traditionally result in an uptick in accidents on the Highway 99 and elsewhere. According to ICBC, casualty crashes (where at least one person was injured or killed) due to driving too fast for conditions increase by a staggering 87 per cent across B.C. in December compared to October.JOEL BARDE

While highway closures were few and far between last winter, experts are warning the public to drive cautiously this winter season, as there are traditionally a significant uptick in accidents.

According to ICBC, casualty crashes (where at least one person was injured or killed) due to driving too fast for conditions increase by a staggering 87 per cent across B.C. in December compared to October. (The calculation is based on police data from 2014 to 2018.)

Tom Webster, a road safety and community coordinator with ICBC, said that Highway 99 can be especially challenging for drivers, given the variability in conditions that are often seen on the highway.

"You have to think of all the possibilities ... just because it's raining in North Vancouver doesn't mean it's not snowing once you get to Alice Lake or places further north," he said, adding that he recommends snow tires as opposed to M+S, which are also permitted. Webster advises the public to check out the DriveBC website, where cameras show real-time shots of what conditions are like, allowing the public to know exactly what to expect.

"The drive cams are one of the best things because they usually show a real-time shot of what the road looks like, and they can really give you a good heads up of what to expect."

Drivers should also be particularly cautious when entering bridges and shaded areas where black ice can form, especially when the temperatures are hovering around zero degrees, said Webster.

Last winter saw relatively fewer non-planned closures than in previous years, with two closures for a total of 191 minutes, according to Ministry of Transportation statistics.

The following season, from Sept. 2018 to March 2019, there was also one fatality, said police.

RCMP Sgt. Rob Knapton said road closures are caused when the road is either blocked due to an accident or police are investigating an accident.

"A big part of [the length of a delay] is the complexity of the investigation," he said.

Accidents involving a fatality require special investigators with the Integrated Collisions Analysis and Reconstruction Service (ICARS), as well as a coroner to respond to the scene.

"We're not permitted under legislation to move the body in any way without the coroner's direction," said Knapton.

Some closures, however, may not be reflected in the statistic provided to Pique by the Ministry of Transportation.

"In an instance where we had a vehicle that was off the side of the road, but we needed to stop traffic to allow the tow truck to remove the vehicle, that may or may not get reported to the Ministry Transportation, because it could be [just] minutes," said Knapton.

In 2017, RCMP developed a pilot project to cut back on police response times and road closures following accidents on Highway 99.

Convened in partnership with Lower Mainland Traffic Services (LMTS) and ICARS, the initiative allows for police to fly a traffic reconstructionist via helicopter from the Lower Mainland on a case-by-case basis following major accidents on the Sea to Sky Highway.

According to RCMP, while the pilot project is still in place, it has not yet been utilized in the Sea to Sky corridor.

"I know that there are some challenges that come with the helicopters that are available," said Knapton. "We had one that was out for quite a period of time and is still in the midst of being certified for police use right now."

Knapton added that Sea to Sky officers have received additional training to assist with accident investigations.

"While we still need ICARS to come out to fatal collisions, the more work we can do in advance of them attending [the scene of an accident] makes their work easier and faster," he said.

Knapton also urged the public to be respectful and patient when there are delays.

"That's the biggest thing to keep in mind: It may be inconvenient ... but think about the family [of a] person that just died. I think that the level of inconvenience [of waiting] for a couple hours pales in comparison to what they are going to go through for the rest of their lives."