The song is being regarded as a cultural anthem with Indigenous women across Canada relating to its message
Jan 14, 2021 4:32 PM By: Cameron Thomson 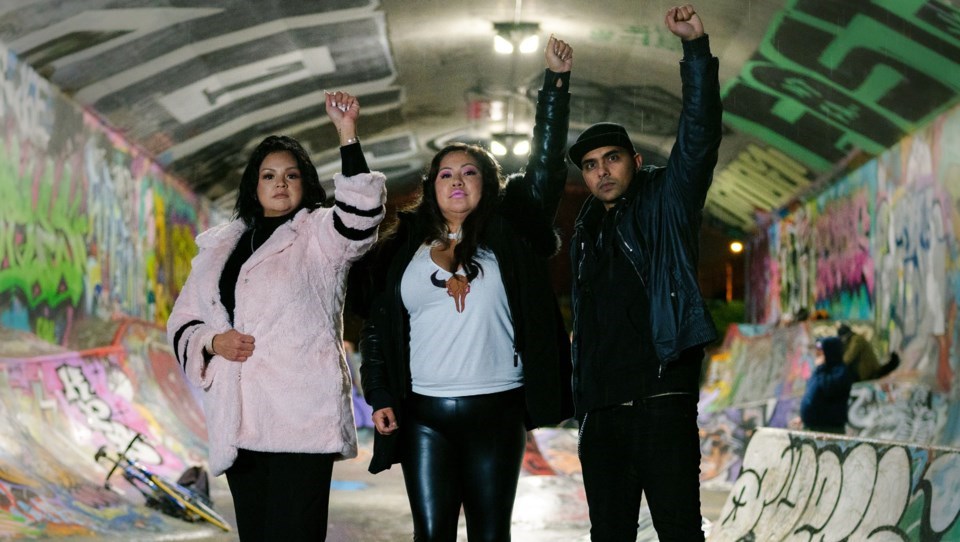 "They tried to kill me but they couldn’t kill me."

This is the message Squamish and Nisga’a Nation artist Amanda Shamentsut Nahanee most wanted to get across her latest hip hop number, "Can’t Kill Me."

Take a listen while you read on:

Nahanee also goes by the stage name Lady Sinncere, a reference to how when colonial rule settled over Indigenous communities in the 19th century her people's culture and traditions were considered either non-existent or sinful. It is that sinfulness that Nahanee has embraced in order to take away its power.

The track, along with an accompanying music video, was released last year on Nov. 25 in support of the International Day for the Elimination of Violence against Women. Nahanee appeared as Lady Sinncere along with fellow hip hop artist Christee Lee Charles and Juno-nominated artist DJ Hussein “A-SLAM” Alidina.

Getting the band together

Alidina produced the song along with his production team, the Global Party Starters. Also featured in the song and music video was traditional percussion played by hereditary chief and elected councillor of the Squamish Nation Ian Campbell.

The project was funded in part by the City of Vancouver when, in 2019, the city partnered with Creative BC. The initiative delivered funds to projects serving underrepresented populations within Vancouver and the traditional unceded homelands of the Musqueam, Squamish or Tsleil-Waututh Nations.

"Can’t Kill Me" was written in response to the Missing and Murdered Indigenous Women and Girls commission released in June 2019. Amanda Nahanee was a note-taker for the commission and the many stories she heard combined with the commission directors’ desire to not let the report grow dusty and unread lead to the song's creation which started that year.

In a press release written after the song’s strong initial success, Alidina said the tune is already on its way to becoming a cultural anthem.

"It feels to me like it's becoming an anthem for that movement because it is so simple and so succinct," he said. "It's the first time in my 10 years of music that I've had that big of a response in the first week."

Alidina explained that in the end Nahanee wrote two choruses, one more metaphorical and complex and the other a more straightforward and impactful simply repeating the lyric "They tried to kill me but they couldn’t kill me."

Delays in the writing process, not the least of which was related to the coronavirus (COVID-19) pandemic, caused Nahanee to use the simpler version in the final product. Vancouver Is Awesome caught up with Nahanee to find out the reason for the change.

"It just wasn't sitting right with me and with this issue I want people to feel impacted by it. I want them to feel something," Nahanee said.

Nahanee added she hopes the song is impactful enough to inspire others to read the MMIWG commission and educate themselves on the issue further.

Following its release, the song was picked up by local Hip-Hop radio shows including Crimes And Treasons on CITR 101.9 and Unsigned BC on Co-op Radio 100.5. More recently ‘Can’t kill me’ saw its first spin on CBC Radio 88.1.

"It is very exciting, I had a little dance party of three in my living room when it first appeared on the radio, I had big tears of joy like 'yes I made it, it happened!'" Nahanee said.

Nahanee is glad the song was successful not just for views on YouTube or streams on Spotify but rather starting the difficult conversations about MMIWG with her nieces and nephews.

Nahanee says she is inspired to write music for TV shows and movies like Monkey Beach that tell Indigenous stories.

"These are native stories that are being shared on television and in the movies and I see this as a great opportunity to create music for these kinds of TV shows and these movies,” Nahanee continued. “Stuff for Indigenous people to dance to, to cry to, to fall in love with, to make babies to."