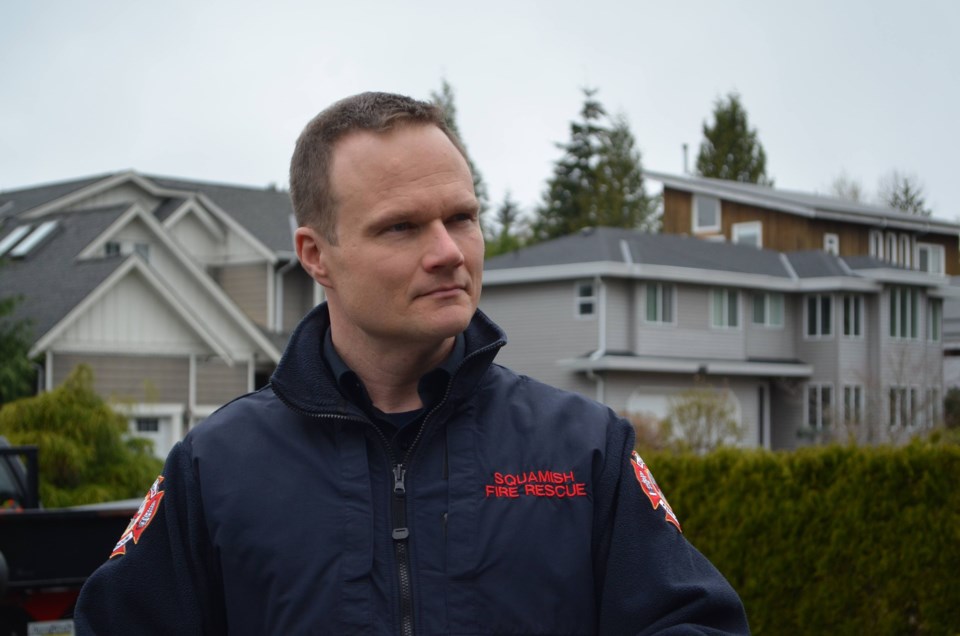 File photo: John Eric 'Taavo' Martin was formerly a firefighter and search and rescue volunteer.File photo/Steven Chua
WARNING: This story contains disturbing details related to child pornography and may be distressing to some readers.

A former Squamish firefighter and Search and Rescue volunteer is undergoing a sentencing hearing after he pleaded guilty to one count of possession of child pornography.

John Eric "Taavo" Martin was charged with one count of possession and one count of distribution of child pornography.

The 45-year-old pleaded guilty to possession of child pornography on March 12, and, on May 31, he was in North Vancouver Provincial Court for a sentencing hearing on the matter.

During the proceedings, Crown prosecutor Jean McPherson asked Judge Reginald Harris to give Martin a jail term of nine to 12 months, with two years of probation.

The maximum sentence is two years, less one day.

Martin was arrested on June 27, 2019, and police executed a search warrant, seizing two smartphones and a computer belonging to Martin.

He was subsequently released. Information from seized items allowed officers to link Martin to an alias, mrt6969, on the online messaging platform Kik, said McPherson. The account was being used to view and send pornographic media of children.

The Crown gave examples of some of the materials.

Authorities ordered Kik to hand over data on this case, and were provided with a USB key.

"RCMP reviewed the contents of the USB storage device provided by Kik and observed 2,905 files appearing to be images and videos sent and received by Martin through his Kik account over a 30-day period from March 13, 2019, to April 14, 2019," McPherson said.

The Crown said Kik does not keep data beyond 30 days due to storage capacity limitations.

McPherson said Martin had been using Kik since 2016.

She added Martin's Kik account was being used at a Squamish cafe, at Fire Hall 2, and at the Squamish Search and Rescue base on Loggers Lane.

McPherson described Martin as a person who had a loving, supportive family when he was growing up, and said Martin did not witness or experience violence or abuse in his family home. He has no history of being sexually abused.

He has, McPherson said, a close relationship with his mother and his sister, and his father is dead.

He was in a nine-year common-law relationship with a woman with whom he has a young child. However, he is currently on a break from that partner.

The Ministry of Children and Family Development has placed limitations on Martin's contact with his child, preventing him from living at home, she said. He is allowed supervised visits.

McPherson said Martin is seeking counselling and is motivated and working on relapse prevention strategies. He plans to abstain from pornography.

She said he expresses remorse.

"He attributes his offending to a sexual addiction to pornography," said McPherson. "He describes a lack of intimacy in his relationship, a sense of loneliness, isolation and the use of pornography to cope with emotional stress as contributing factors."

She said, citing a report, Martin was drawn to the novelty of the pornographic material he was viewing, even though he said he isn't attracted to prepubescent children.

"It shows that despite what we heard and will hear from Mr. Martin, there is an incredible lack of insight here into the offending behaviour," said McPherson.

"That the viewing of child sexual assaults through child pornography was akin to looking at fat women or ugly women. That its novelty is what aroused him. He denies being aroused by young girls and, yet, that's what he's looking at."

He said that while Martin grew up in a loving family, they were not taught to express emotion.

"Simple phrases like, 'I love you' were not spoken," said Diamond.

He also noted that Martin has experienced traumatic events that made a lasting impression.

In one case, when Martin was volunteering at a parks organization working in the jungle in Belize, he was hitchhiking near a city. Bandits had blocked off the road with vehicles.

Ex-military men from Guatemala were stopping people and robbing them.

At one point, a car was shot at because it tried to go around, at another, a man was shot because he didn't give him all the money he had.

"The image that he has imprinted in the brain is seeing this man who was...shot for not having provided the money," said Diamond.

He never received any therapy or treatment for this incident but would feel the effects of this.

Diamond said another traumatic incident occurred to Martin not long after his father died in 2007.

While rock climbing, Martin witnessed his friend take a serious fall. This friend would wind up in a coma and die.

"[Martin] didn't receive any counselling or help to address that," Diamond said.

There were several other traumatic incidents that Martin witnessed as a first responder for Squamish Fire Rescue or Search and Rescue, the defence said.

One example includes a woman who was complaining about chest pain, telling him she didn't want to die. He would reassure her, but she then collapsed and fell dead moments later.

There were several other traumatic incidents that he attended that the defence lawyer described in detail.

"There's no evidence that he accessed or reached out, or so problematic that triggered him to reach out," said Harris.

"Why he might, combined with everything else, play into why he might find himself isolated and addicted to pornography," said Diamond.

"There's a theme we hear in a lot of these cases about people numbing their feelings, escapism, these kinds of things. And, if nothing else, it might show that he's been of strong character dealing with these things for so many years, and, yet, eventually, he cracked and was relying on pornography mainly, but then drifted into child pornography, in order to service whatever need seemed to be there at the time."

The defence also sought a publication ban, citing, among other things, the impact on Martin's child of the coverage.

However, Harris did not grant the ban.

As part of his reasons for not granting the ban, he referenced a past case, saying that media can be used as a deterrent to crime.

"As well, it is a way of building on denunciation and deterrence. That is, people become alive that, 'Hey people are getting arrested for this stuff,' and the police are finding out and it deters them even before a conviction or a charge."

Martin's sentencing hearing is scheduled to continue on June 18.