From dead to alive in Howe Sound

Artificial Reef Society of B.C. program monitoring what is visiting and growing on the sunken Annapolis
Apr 2, 2019 8:46 AM By: Jennifer Thuncher 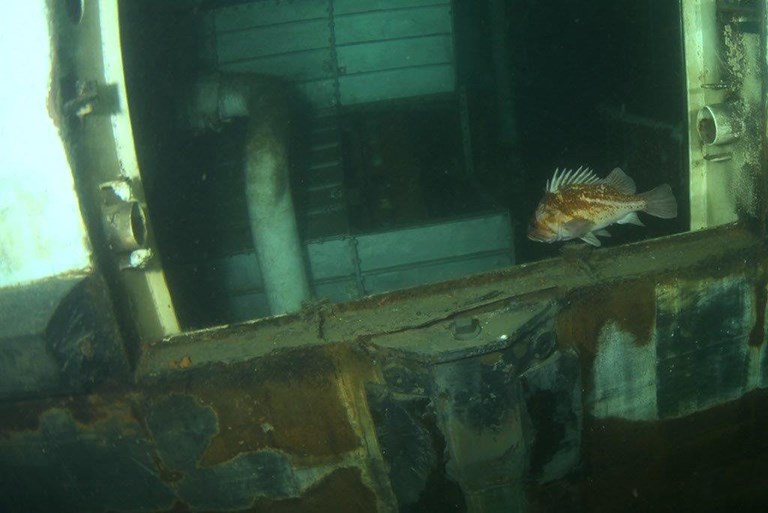 When a commercial or government vessel reaches the end of life, creating an artificial reef out of it, should be considered, says Howard Robins, president of the Artificial Reef Society of B.C.

"Reefing may not be the first thing you think of, but it should be considered in the equation," Robins said.

Reefing may stem the tide of watercraft that are sold off and eventually end up abandoned boats, too, he added.

"We understand there are companies, government agencies that have fleets of vessels... that also have vessel replacements coming in due course. We simply talk to organizations and government about the opportunity of considering the reefing of a ship to perhaps solve a problem that they may have," said Robins.

The society has sunk eight ships and one Boeing 737 in the waters off B.C.’s west coast since 1991.

Reefing ships isn't new. In fact, it is likely as old as boats themselves.

“About 2000 years ago, the ancient Greek geographer Strabo recorded that the ancient Persian kingdoms built reefs across the mouth of the Tigris River to obstruct the passage of marauding naval pirates from India, the Vikings of the time,” notes a report on reefing by the RAND Corporation.

The first documented artificial reef in the U.S. was in 1830, the report states.

Robins points to the sinking of the 1960s-era HMCS Annapolis destroyer as an example of how reefing can be a benefit in modern times.

Though controversy over its clean up and possible contaminants that local residents feared could seep from the ship underwater dogged it for a time, the Annapolis was sunk on April 4, 2015, in Halkett Bay.

The underwater Annapolis is being studied to see how it does as a marine ecosystem.

With a team of citizen scientist divers, the Annapolis Biodiversity Index Study (ABIS) — which was launched almost as soon as the ship was sunk — monitors and records marine life on the Annapolis.

This is the first time organized, regular recording has been done on ships sunk by the Artificial Reef Society of B.C., according to Robins.

Donna Gibbs, research diver and data specialist with Ocean Wise manages the recording of the data.  She dives the Annapolis and also collects video and photos from the project.

"I simply record everything I see. I keep track of the number of animals and their abundance. I hunt the cracks and crevices for the not-so-obvious life," she said.

So far, 34 dives of the Annapolis have been recorded.

Nine hundred observations have been made and 158 species have been found, Gibbs said.

"Sponges always inspire me. They were the last group to show up so I am always watching for more," she told The Chief.

Robins said that there is no real saturation point at which Howe Sound would have too many artificial reefs, but the topography of the fjord restricts where they can be placed.

"That is completely dependant on what the ship is and how big it is," he said. "That gives us the thought process of where can a ship go."

The placing of a ship is strategic. It has to meet 10 standards created by the artificial reef society.

Safety factors for divers, optimizing biological productivity and efficiency are some of the things considered in placement.

Concern has been raised over the years and around the world about the environmental cons that may result from reefing ships.

Each ship sunk by the B.C. reef society has passed through a stringent government permitting process, but Robins acknowledges there is an environmental downside.

"The negative thing about an artificial reef is the contact area on the sea floor will be damaged — that is a certainty," he said.

The projects have to demonstrate net gain and not net loss, he added.

"What we are destroying is a very small part of what the overall structure will provide," he said. "I defy people to go on these ships and say we have damaged the environment."

In the case of the Annapolis, the ship includes a flight deck and a helicopter hanger, so has a lot of open structure that provide similar habitat as what it destroyed by being placed on the seafloor.

For more on artificial reefs go to, artificialreefsocietybc.ca.

To be a good candidate to be reefed:

*The vessel has to have proper title and ownership. The society doesn't touch anything that doesn't have proper legal documentation.

*There has to be a sufficient budget to clean the ship up.

*A full complete environmental assessment has to be done by an approved by Environment Canada inspector before a vessel will be approved for reefing. If it is not approved, it can't be sunk.

*The vessel has to be suitable for the marine environment to become its own ecosystem. The ship has to be large enough and made of appropriate materials — not wood, for example.