The Wild Salmon Policy would work to protect habitat in Squamish
Mar 23, 2017 4:28 PM By: Steven Chua 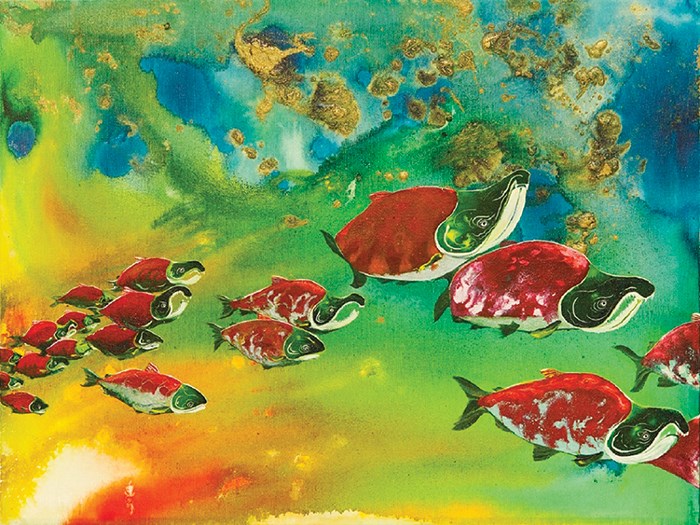 Salmon are an important part of the ecosystem to many people, including artist Sanaz Busink who painted the artwork above. Now environmentalists are accusing the government of weakening the salmon conservation policy.

Environmentalists clashed with the Department of Fisheries and Oceans Canada (DFO) over the highly contested salmon policy that aims to conserve the province’s fish.

In a recent public meeting, salmon advocacy group Watershed Watch Salmon Society voiced concerns the DFO was stalling and trying to rewrite a policy that activists say would help preserve salmon throughout B.C.

“I think we managed to get them to re-evaluate the process,” said Aaron Hill, executive director of Watershed Watch. “We’re hoping that it puts a stop to this idea of rewriting the policy.”

The activist group has accused the DFO of using public consultations as a front to change the policy and make it easier to water down.

“There’s a lot of groups like us that are super keen to work with them on implementing the policy,” Hill added. “We just need the department to actually get behind it instead of trying so hard to do so little.”

Among other things, Watershed Watch is also accusing the DFO of misinterpreting the document in a way that would remove the end goals of the salmon policy. Environmentalists believe this would make it difficult or impossible to hold authorities to account.

“Where I think [the Wild Salmon Policy] will help the Squamish area is protecting habitat of our wild salmon in the Squamish river system and monitoring the health of the population through proper assessment of the stocks,” said Dave Brown of the Sea to Sky Fisheries Roundtable.

“Species such as chum and pink, that get commercially caught, we don’t know a lot of information where they may be intercepted and if there are adequate numbers to return to seed the Squamish watershed if there is a commercial fishery.”

The group also says the DFO’s stated goal of aligning the salmon policy with current legislation will hurt the government’s ability to protect the fish.

As an example, the environmentalists point to a 2016 Vancouver Sun report that said the DFO had not laid a single charge in the damaging of fish habitat since changes were made to the Fisheries Act years ago.

Activists say this version of the Fisheries Act is still in place, and that aligning the salmon policy with it would hurt the government’s ability to protect the fish.

The DFO, however, says that it is simply modernizing a plan that was proposed years ago.

“Fisheries and Oceans Canada remains committed to the conservation and sustainable use of wild Pacific salmon,” wrote DFO spokesperson Athina Vazeos in an emailed response.

She wrote: “Fisheries and Oceans Canada is updating the [Wild Salmon Policy], which was developed in 2005, to reflect current legislative and program changes while retaining the original policy goal, objectives, and guiding principles.”

However, the 2012 Cohen Commission report has already called for the DFO to implement the 2005 wild salmon policy as it stands.

The report was made by B.C. Supreme Court Justice Bruce Cohen, who had been appointed to investigate the collapse of the Fraser River salmon population in 2009.

“I call for action on two pivotal DFO policies that have yet to be fully implemented: the 1986 Habitat Policy and the 2005 Wild Salmon Policy,” wrote Cohen.

In the next few months, the DFO is expected to produce a draft plan that would detail how it plans to preserve the province’s salmon.