‘I found myself right at the edge of my life’ 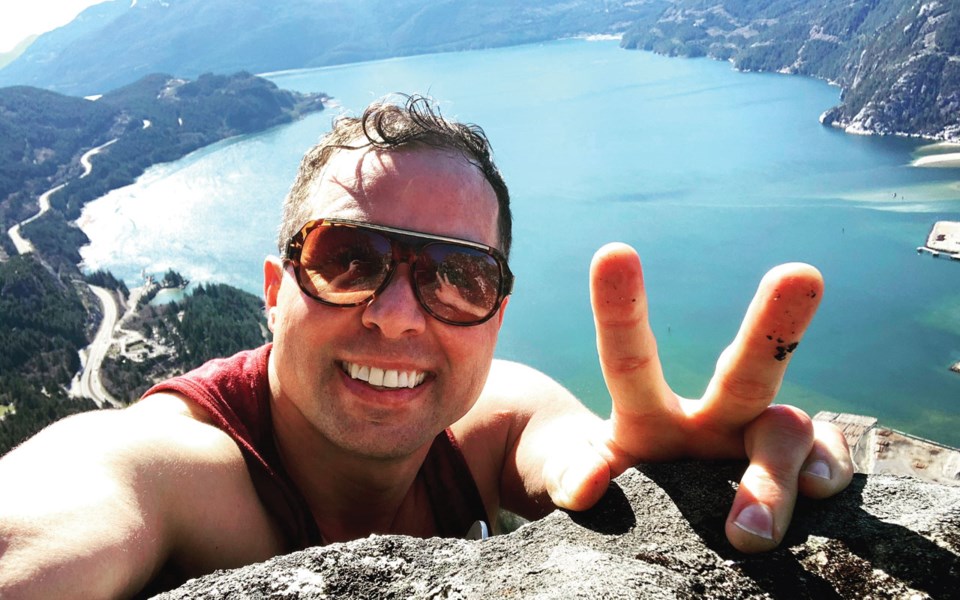 Forty-two-year-old Whistlerite Mike Roberts is hiking the Stawamus Chief every day for a year following his recovery from a series of traumatic brain injuries and subsequent drug addiction. Photo submitted

Three weeks into his plan to hike the Stawamus Chief every day for a year and Mike Roberts isn’t afraid to admit the immense physical toll it’s taken on him.

“This thing sucks,” said the longtime Whistler resident. “But whenever I get tired or feel sorry for myself, I think about where I was, I think about the people who have no idea how to make their life better and I get powered up right away. I don’t miss a step.”

Roberts hopes to use his year-long effort to raise awareness of the mental health services available locally after his battle with head trauma and subsequent drug addiction led him to the lowest point in his life.

“There were days I couldn’t get out of bed to go to work and get money for food because I was overwhelmed by simple things,” he recalled.
“I found myself right at the edge of my life, man. It was debilitating.”

Prone to irritability and angry outbursts, Roberts couldn’t figure out what was wrong. An avid snowboarder and skateboarder, Roberts said he has suffered upwards of a dozen head injuries over his lifetime, which he thought might have contributed to his issues.

“I didn’t know what was occurring, so I just thought I was broken but I had nothing to tell me why,” he relayed. “I went to many doctors and everyone said I was fine but I could sense inside myself everything wasn’t fine. I wasn’t sleeping. I wasn’t eating. I was losing my temper.”

With nowhere else to turn, Roberts began using recreational drugs as a way to self-medicate, developing an addiction along the way. Eventually the long-time musician started losing gigs and was fired from his job after missing one-too-many shifts.

It was two things that eventually helped Roberts turn his life around: a phone call to Vancouver Coastal Health (VCH), and the work of American Dr. Mark L. Gordon. Medical director for the Millennium Neurogenerative Centers and author of two books, Gordon pioneered “a new paradigm for traumatic brain injury,” wrote Psychology Today, with his use of hormone-replacement therapy. According to the Brain Injury Association of America, up to 30 per cent of people diagnosed with moderate to severe traumatic brain injury experience hormonal dysregulation more than a year after injury.

“When I actually got the right treatment and clarity of mind, I realized I no longer wanted to be self-medicating,” Roberts said.

Roberts then connected with a local VCH nurse and was eventually referred to a treatment centre for his addiction, where he spent three months and also received subsidized counselling to unpack past childhood traumas.

“I can’t begin to tell you what it felt like to get an escape from life with people who cared about my needs, helped me through my trauma and helped me heal,” Roberts said.

At the moment, Roberts is working on connecting with local organizations to raise money throughout his year of hiking, but his main goal is to serve as a ray of hope to others who may be facing down the same darkness he did.

“I’m doing this for the guy or the girl that is terrified not knowing what to do, and I’m here to tell them one phone call can change their life,” he said. “I’m in a place right now where I have nothing but life in me … to prove a point: there’s no shame in having mental health issues, none whatsoever.”

This past week, Roberts’ daily ascents of the Chief have officially surpassed the elevation of Mount Everest from sea level, an important milestone for the 42-year-old hiker.

“My whole life I’ve heard that Everest is the hardest thing you can do,” he said. “I did the thing that everyone said was the hardest and I did it one step, one decision at a time.”