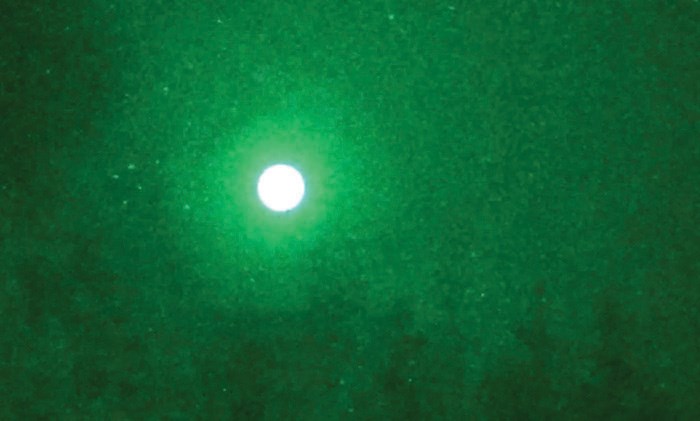 A giant orb floats across the sky above the Stawamus Chief on July 22.Submitted photo

A large orb captured on video near the Stawamus Chief has excited a documentary and research crew from London, Ont.

Rob Freeman and Marcus McNabb have travelled to 11 countries and 30 cities in the past three years determined to record what is out there, after being inspired from a childhood experience.

Freeman, a senior field researcher for the Centre for the Scientific Study of Atmospheric Anomalies, said the sighting is the best footage they’ve recorded to date.

“This is such a fascinating path that we are on,” Freeman said. “Most people have no idea what’s happening in the world.”

The pair initially started out to make a documentary but McNabb now describes it as a movement.

To collect data, the crew used night imaging technology spanning the electromagnetic spectrum to see the visible and invisible, as well as a camera fondly called the “weapon of mass detection.”

When the crew arrived in Squamish on July 22, a stranger at the Britannia Mine gift shop told them special things shine on the Chief trail. “It was breathtakingly majestic,” Freeman said of the rock face.

As night fell, they entered the forest. Soon after, he said, a giant sphere of light moved across the sky and descended into the woods.

“At first we thought it was an airplane,” Freeman said. “There was absolutely no sound… then we absolutely knew it was no airplane.”

The sighting was brief, but Freeman recorded about 10 seconds after rummaging for gear.

“The trees behind the orb were all lit up,” he explained. “That means it was in front of the trees.”

They planned the trip to B.C. specifically to meet Charles Lamoureux, a Vancouver-based online skywatcher featured in local news reports.

Lamoureux documents the inexplicable phenomena, often seeing them move over Cypress and toward Horseshoe Bay. He made his own film, Nocturnal Lights, and is currently working with SFU on a paranormal program.

Orbs can vary in size, known to blink amber or white light when zipping off, he explained. On July 20, the group tracked an orb with thermal gear from Vanier Park toward the mountains.

Lamoureux suggested going to Squamish, though didn’t head out that night due to rain.

“People at the Chief have actually seen lighted orbs or spheres,” he says, citing Internet videos.

Lamoureux was disappointed to miss the sighting. He fact-checked the video the crew immediately sent, confirming it was not a plane, drone, satellite or meteor, after no such YVR documented routes were found.

The Mutual UFO Network, an international organization originating in 1969 that collects and researches data specific to sky watching, said it is incredible footage.

“This is the clearest orb video so far this year,” the spokesperson responded.

“The Chief is a sacred mountain,” Freeman said. “Lights are found in ancient spots like Peru or Norway. Whatever it is, in every single country on every single expedition, we’ve got something.”