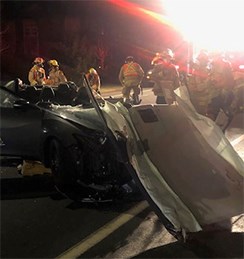 A 34-year-old North Vancouver man was arrested after an early-morning crash involving multiple vehicles on Thursday, Jan. 14 on Tantalus Road.

At approximately 2:20 a.m., police and fire were called to the scene to help the driver, who was pinned inside a grey Nissan Maxima, according to an RCMP news release sent out Jan. 19.

The driver was extracted from the vehicle, detained by police for investigation and then transported to a local hospital to treat his injuries, which were not revealed by the RCMP.

Shortly after police officers arrived, a report was received that a Nissan Maxima had allegedly been stolen from outside the 7-11 on Garibaldi Way, RCMP said in the release.

The driver was subsequently arrested for Possession of Stolen Property, Impaired Driving, and a Breach of Undertaking.
He was released on the condition he appear in court in North Vancouver.