Marijuana dispensary owner plans to stay open - in some form 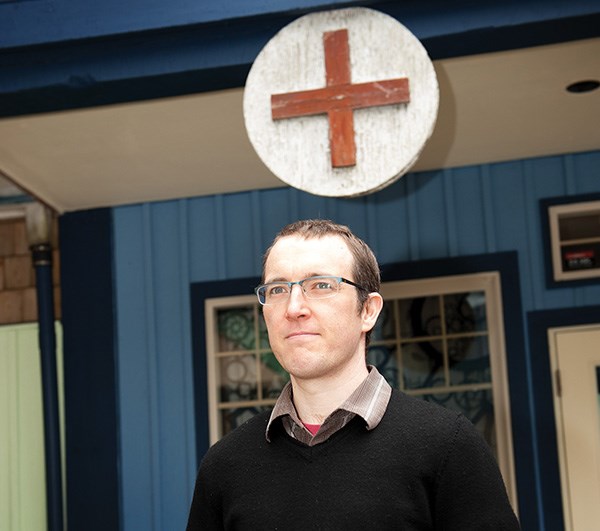 Bryan Raiser at his medical marijuana dispensary on Second Avenue in Squamish.David Buzzard/For The Squamish Chief

Tomorrow is the day.

The RCMP told Bryan Raiser that he had to close his medical marijuana dispensary by Thursday, March 19.

Tuesday night he won, symbolically anyway, the support of district of Squamish council.

Raiser appeared before council Tuesday night and asked that they pass a motion in support of access to medical marijuana derivatives. The motion was similar to that passed in January by city council in Grand Forks, which is also an RCMP jurisdiction.

The motion stated that council will request that the federal government include marijuana derivatives, such as cannabis oils, be included in the legal marijuana program and that government further review legislation and options for greater local access.

“The actual production of medical marijuana – the licensing piece – is currently mired in the courts right now, and I think it provides a service and a medicine for people who need it, so I am happy to support the motion,” said Mayor Patricia Heintzman.

“I do support this,” said Councillor Doug Race, “partly because I think the federal government, almost by any standard, has made a real mess of this and needs to take real steps to clarify it. These are people who would have doctors’ prescriptions, of course. This is not selling drugs on the street, by a long shot.”

Raiser said he was happy with the move by council, but still nervous about the coming days.

“The situation is far from over, but I continue to be heartened by the support,” Raiser told The Squamish Chief shortly after the council passed his motion.

He said he would be speaking with his lawyer about his next steps.

“I will do everything in my power to keep those doors open in some form or other, and I couldn’t do that without all the support I’ve been getting,” he said.

Since The Squamish Chief reported last week that Raiser had received an RCMP letter to close his medical marijuana dispensary, Raiser says he has heard nothing but support from the public.

“Even people who aren’t big fans of my previous political decisions have come out in huge support,” Raiser said from his 99 North Medical Cannabis Dispensary.

“I have fought so many battles in my years and I have never come close to fighting something where I have 100 per cent support of the community,” he said.

Raiser opened on Feb. 16 at 37768 Second Avenue in downtown Squamish.

On March 5 the local RCMP visited to deliver a letter that, according to Raiser, said they intend to take action if he does not close by Thursday, Raiser said. In the letter, marijuana dispensaries are termed “illegal.”

Raiser said he is deeply disappointed in the actions of the Squamish RCMP, but he understands that the members are just following orders from higher up.

“It is like the war [against medical marijuana] has been declared over, but you haven’t got official orders…. People are actually being helped and finding relief, you can’t be against that.”

He has had a hard time telling some of his customers that he may have to close.

“Now that I have seen the faces of who this is affecting, I can’t sleep at night, knowing they are in the alley,” he said, his voice breaking with emotion.

“It is utter madness.”

He said that while there are upwards of 60 medical marijuana shops operating in Vancouver, many of his customers don’t have the financial means to get to the city or are too sick to travel.

Raiser offers medical marijuana in various forms, including dried cannabis, oils, edible and topical marijuana. Patients can obtain the drug with a prescription from a health care practitioner that must be faxed to the dispensary or through documents that confirm a diagnosis of certain conditions such as cancer, anxiety or arthritis, according to Raiser.

Dana Larsen of Sensible BC, a medical marijuana advocacy group, said dispensaries operate within RCMP jurisdictions in many small communities across the country.

“Police absolutely do have discretion,” he said.

TAGGS Dispensary in Maple Ridge, an RCMP jurisdiction, said there had been no issue with the RCMP there, even though the dispensary has operated for years, according to an employee who answered a call from The Squamish Chief.

A dispensary also operates in Grand Forks, which is under RCMP jurisdiction.

Larsen said the situation in Squamish and other locations such as Parksville, where a shop has also been told to close, reminds him of the crackdown on bong and pot paraphernalia shops in the 1990s. Eventually the message from communities to the police was to leave the shops alone, Larsen said, and so at this point even though it is illegal to sell a bong and pot accessories, no one is charged for selling them.

“I would encourage him to stay open,” Larsen said of Raiser.

John Weston, Conservative Member of Parliament for West Vancouver-Sunshine Coast-Sea to Sky Country sent the following statement to The Squamish Chief regarding the threatened closure of the dispensary in Squamish: “Overall, dispensaries are illegal, and always have been. The medical marijuana program has never allowed for storefronts, nor does the reformed program permit them.”

Local lawyer Greg Diamond told the Squamish Chief that up until April 2014, medical marijuana was regulated by Health Canada through the Medical Marihuana Access Regulations (MMAR).

“People could obtain licenses to possess and to grow marijuana through this scheme. Commercial dispensaries were not contemplated in these laws. Instead, it seems compassion clubs and similar dispensaries sprang up to fill a need for those that could not grow their own or could not find someone to grow for them. These dispensaries were not legal, but they appear to have been tolerated, especially in larger centres like Vancouver where law enforcement resources were not being focused on marijuana,” Diamond said.

In April 2014, the Federal Government enacted the Marihuana for Medical Purposes Regulations (MMPR) to replace the MMAR. Now, production and distribution of marijuana must be done through commercially licensed facilities that report to Health Canada, according to Diamond.

“As such, there is no longer the impetus to tolerate non-licensed dispensaries like Raiser’s,” explained the lawyer, who does not represent Raiser. “Despite the apparent need for Raiser’s services, if he continues to dispense marijuana without the proper licensing, then he may be subject to prosecution for trafficking and even liability under the Civil Forfeiture Act, something he has good reason to fear.”

Tale of another dispensary

The Kootenay’s Medicine Tree Medical Cannabis Dispensary, in Grand Forks, B.C. operates in an RCMP jurisdiction, and staff can relate to what Bryan Raiser is going through with the threatened closure of his medical marijuana dispensary.

The Kootenay dispensary was in full operation with a storefront from August to December 2014, with a business license granted by Grand Forks city hall, according to Jim Leslie, executive director of the dispensary.

When RCMP officers came to tell them they had to shut down on Dec. 22, staff asked if the store could stay open as a resource centre to provide information, and the RCMP said that was fine.

Then the store went public with what had happened and received great community support.

“In that time we gained legitimacy in the local medical community,” said Leslie, a former border guard.

The staff took the support they had and went before Grand Forks council and asked council to support local storefront access for medical marijuana.

The council passed a motion to write the federal government and the Supreme Court of Canada and ask them to make marijuana derivatives legally accessible, according to Leslie.

The dispensary continued to supply medical marijuana and currently does so, but “through other channels outside of the storefront.”

Leslie said he feels RCMP do have discretion. The dispensary hasn’t had a visit from the RCMP since December.

“We are in a very strange position in the dying days of prohibition,” said Leslie.