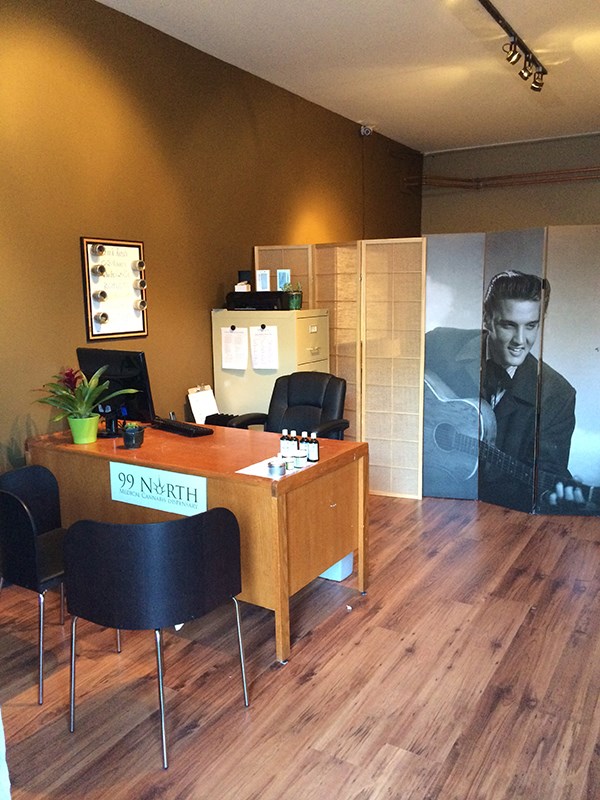 Inside the 99 North Medical Cannabis Dispensary at 37769 Second Avenue in downtown Squamish, at the corner of Vancouver Street.Submitted photo

A storefront medical marijuana dispensary opened this week in Squamish.

Bryan Raiser, a former District of Squamish councillor, on Monday opened the 99 North Medical Cannabis Dispensary at 37768 Second Avenue in downtown Squamish, at the corner of Vancouver Street.

He opened the dispensary quietly on Monday, but even then, a few people stopped in to see what it offered. By Monday night Raiser began promoting the shop to his Facebook friends.

Raiser, who is well known as a community volunteer and leader, is the sole owner and employee of the dispensary, although he plans to add staff soon. Public reaction to the shop has been “overwhelmingly supportive and positive,” Raiser said. “It’s incredible. I am very heartened.”

Raiser has operated businesses in the past, but never a storefront, he said. “It’s very exciting, nerve-wracking and a little scary.”

Customers can obtain medical marijuana with a prescription from their health care practitioner that must be faxed to the dispensary, said Raiser.

He then calls the doctor’s office to confirm the prescription before supplying marijuana to the patient, he said.

Alternatively, the dispensary can supply marijuana to patients if they can confirm via documents from their doctor a diagnosis of specific conditions and diseases such as cancer, epilepsy, anxiety, AIDS, arthritis or glaucoma, Raiser said. This would allow the patients with these conditions to obtain marijuana even if their doctors do not specifically prescribe it.

Raiser said he has used medical cannabis since being diagnosed with Chrohn’s disease in 1997. “I became intimately aware of the real benefits of cannabis for managing pain, nausea, muscle spasms, appetite, anxiety and sleep,” he said.

He knows that many others in the community can also benefit from the health benefits of cannabis, “and I am very glad to be providing people with relief,” he said.

Raiser said he has “no special permit” from the district to operate a medical marijuana dispensary.

“We are operating in a grey area. No dispensary has a business license because the municipalities can’t give them out,” he said.“We are in a very bizarre, peculiar moment in history,” Raiser explained. “We are going to look back in a couple of years and ask, ‘What were we thinking?’”

Raiser said he has had walk-ins, calls and some sales already in his first few days of business. “It’s been good,” he said.

In addition to providing proof from their doctors, customers are asked to sign a strict code of conduct, he said. “It’s all about being a positive part of the community…. no reselling, be respectful, no sharing.”

He also has suppliers sign a contract. “I have suppliers who wish to remain nameless, but I have a strict buying policy and I make sure it is all clean and top-quality,” said Raiser, who added that testing is done on the marijuana.

Although he hadn’t had a visit from RCMP yet as of Wednesday morning, Raiser expects to see a few officers stop in. “I expect them to come by and I look forward to having a civil chat. Everyone knows who I am and my commitment to the community. That’s a big hurdle that I have overcome in my 20 years of community service. It’s not like a stranger is opening this shop.”

The cannabis dispensary is the first in the Sea to Sky Corridor, said Raiser, who expects many patients will come from Whistler and Pemberton as well as Squamish.