No skiers caught in slide, but touring group flown out after losing its gear
Jan 15, 2021 2:30 PM By: Megan Lalonde 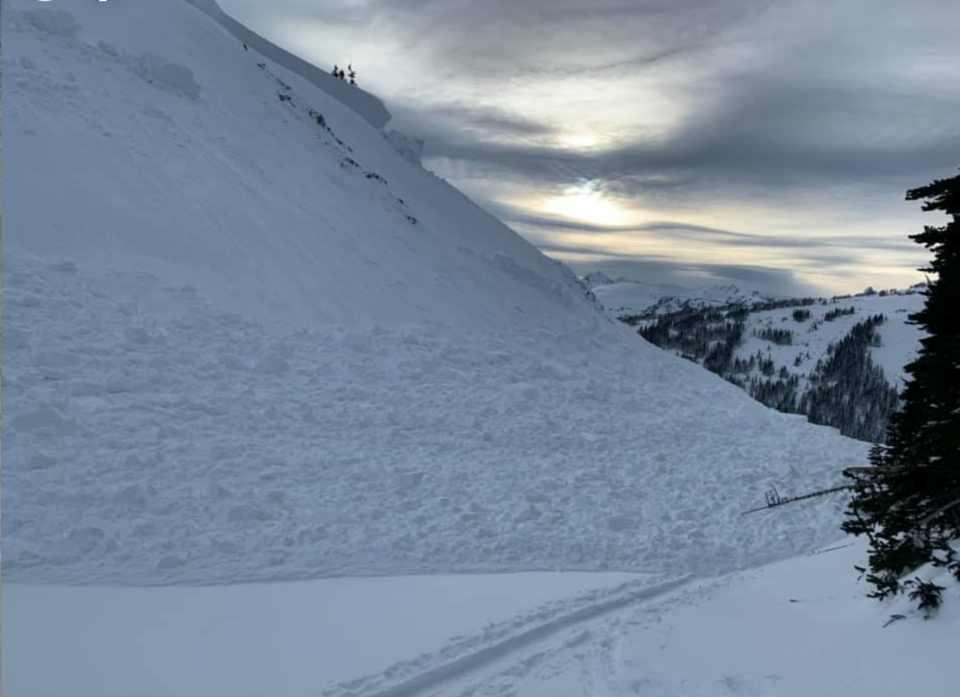 A size 3 avalanche slid down Cowboy Ridge in Whistler’s backcountry on Saturday, Jan. 9, covering the skin track that skiers had been using to ascend the slope. Fortunately, no one was buried in the snow.Joe Peplowski

During his avalanche skills training course, Joe Peplowski learned that an avalanche is typically accompanied by a deep, heavy rumbling sound.

Peplowski and his ski touring partner, who both live in Whistler, were climbing up Cowboy Ridge on Saturday, Jan. 9, and had made it about three quarters of the way when, shortly after 3 p.m., he heard that ominous sound.

“We had got to kind of a flat part near the top of the ridge, right next to some trees, so of all places to be it was pretty good. We heard it … and then we took a look to our right and could see that it was an avalanche. There was no mistaking it, it was huge,” said Peplowski of the size 3 slide.

“We did have to sidestep out of the way a little bit—it basically stopped at our feet and went right over the skin track where we were, like, seconds ago.”

There was a party of four behind Peplowski. The snow swept towards them, burying several of their skis and partially burying one member of the group, “but he was out once we got to them,” explained Peplowski.

Though the pair hadn’t seen any skiers descending the ridge or anyone above them, they immediately switched their transceivers into search mode and began scouring the wide debris field for a signal.

“The avalanche debris itself was, like, huge chunks of snow, so it was really hard to ski on but also really hard to walk through … It took about half an hour to get through the entire debris field, but nothing turned up, thankfully,” said Peplowski.

That’s all to say, the Saturday afternoon slide could have been far more tragic. The popular backcountry area is easily accessibly via Whistler Mountain’s Flute summit and Musical Bumps, and on a typical weekend, would have hosted numerous touring parties out for a few sunny laps.

Though no one was injured by the slide, the group that saw its skis buried by debris returned to the valley by helicopter. Peplowski and his partner, meanwhile, pulled out their headlamps and headed down via Singing Pass.

A size 3 avalanche, according to Avalanche Canada, is powerful enough to bury a car, destroy a small building or break a few trees. The avalanche forecast for the Sea to Sky region on Saturday was rated as “considerable,” which Peplowski said he and his touring partner took into account while planning their route both up and down the ridge.

According to Avalanche Canada, the Cowboy Ridge slide was remotely triggered by skiers, and occurred on a north-to-northwest aspect at around 1,900 metres elevation. The crown reached up to 200 centimetres, and was approximately 200-m wide.

Saturday’s slide wasn’t the first to impact the region, either: Another Avalanche Canada report stated that a size 2.5 to 3 remotely triggered avalanche slid down a westerly aspect of Cowboy Ridge on Thursday, just two days earlier.

According to Whistler Search and Rescue [WSAR], the response to Saturday’s incident was remarkably swift, in part because one of their members happened to be skinning up when the avalanche occurred.

“It came in very timely and went directly to Whistler dispatch just because of his first-hand knowledge, and knowledge that one of our other members—Daren Romano—was working [on mountain] that day,” said Brad Sills, manager of WSAR.

To that end, Romano immediately contacted the RCMP, which gave authorization to move forward. A team that included a doctor and a dog handler were on scene in 10 to 12 minutes of the initial call.

“[That’s] incredibly fast, but my first point is if you’re depending on search and rescue for a live recovery, you really should take more training,” Sills added. “We do the best we can and sometimes we get lucky, but four minutes without oxygen and your life is pretty different.”

Meanwhile, back on scene, a helicopter flew over the site to look for things like people on the surface of the avalanche, anyone partially buried, or evidence like skis, packs or other equipment. The airborne team can also report if anyone is already undertaking a beacon search.

“All that, plus confirmation of size, so forecasters can do an update on whether we should be entering the scene,” Sills said. “Just because you’re in an avalanche, doesn’t necessarily mean people are going to come onto that scene to assist. That’s an important thing for people to realize.”

After rescuers at the top of the avalanche did a quick beacon search, they sent the dog out, and saw some indication there could be something mid-field, he added. In the end, they determined it was likely a pack or ski.

The 15 rescuers who arrived within 20 minutes interviewed 10 people who had been on site to ensure their parties were accounted for and determine if they saw anyone else in the area that was unaccounted for.

“The second load brought in RECCO [a detector to find any signs of RECCO reflectors] and we did a search with that,” Sills said. “This is all happening with two hours of daylight left. It’s a lot of work to be done; it was a size 3 and it went down into the trees, which makes it more difficult.”

But, by nightfall, they were satisfied that no one was missing.

While no one was injured, SAR did fly out some people who were on scene and had lost gear in the slide. “If something happens to them afterward and we had attended and left them there, the optics of that aren’t very good,” Sills said. “We like to pack them out.”

These avalanches come following a particularly volatile few weeks in the Coast Mountains, marked by higher-than-usual avalanche danger ratings, heavy and unrelenting storm cycles, as well as a string of heartbreaking tragedies, both in the backcountry and within the resort.

With more people venturing into the backcountry amid limits on indoor gatherings, Avalanche Canada, BC Search and Rescue and WorkSafe BC issued a news release on Monday, Jan. 11, urging British Columbians to educate themselves on avalanche preparedness, backcountry safety and risk assessment before heading out.

As officials explained in the release, a search and rescue (SAR) response to a backcountry user caught in an avalanche can only happen once a safety assessment and possible control work is completed—“meaning users cannot assume SAR will always be available,” the release read.

That’s why, “It’s critical that backcountry users know how to carry out an effective companion rescue. Everyone needs the proper gear and should be well trained in its use. The unfortunate reality is that survival rates drop dramatically after just 10 minutes of burial,” said Chris Kelly, BCSARA president, in a release.

BC AdventureSmart will be hosting Avalanche Awareness days at the base of Blackcomb Mountain on Jan. 16 and 17 from 8:30 a.m. to 3 p.m. to help educate backcountry users.

When asked whether there were any lessons he took from the close call on Saturday, Peplowski encouraged anyone heading into the backcountry to brush up on their safety skills in the event they witness a similar slide.

“I took the [Avalanche Skills Training] course three years ago, and this year, I kind of wish I’d brushed up on my beacon search, because when I was doing it, I could tell I was rusty and not nearly as fast as I was when I first took the course,” he said.

“However, if I had to pick one thing to keep in mind [it would be]: Just because there is a well-travelled skin track or other people are travelling in an area doesn’t mean it’s safe. Use your own judgment and draw your own conclusions about how risky a route is,” Peplowski added.

“It’s eye-opening. I’m going to be touring with a new set of eyes from now on.”

- with files from Alyssa Noel