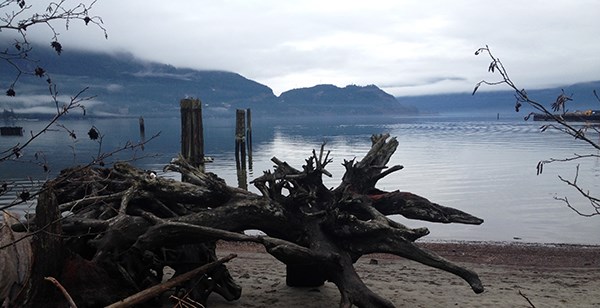 A new marine trail will be launched in June that links campers on watercraft to 10 free water-accessed campsites. The trail is expected to be accessible from Nexen Beach.Christine Endicott

Come June, Squamish seafarers will have more water adventures to pursue, thanks to a brand new marine trail system on Howe Sound.

In Squamish the trail will be accessible likely from Nexen Beach and then follow around and across Howe Sound to access 10 camping sites.

McKeever was on hand to request a motion of support for the marine trail at council Tuesday night. It was a motion council was happy to support.

“I think it is a great idea,” said Mayor Patricia Heintzman.

Howe Sound has been woefully underutilized compared to other coastal waters as far as recreation is concerned, McKeever said.

Pollution from the Britannia Mine, the Woodfibre pulp mill and the Nexen chlor-alkali plant deterred people from water recreation for decades, but now those pollution sources have been remediated and Howe Sound is rebounding, he said.

The marine trail idea originally came out of a goal to connect all of the Sea to Sky Corridor with the Lower Mainland by a trail, as part of Trans Canada Trail, according to Teressa McMillan, recreation technician with Recreation Sites and Trails BC, a provincial program.

“The land between Squamish and the Lower Mainland has too many challenges for a land-based trail, so we took the Sea to Sky trail to the water,” McMillan told The Squamish Chief.

“The sites are intended mainly for self-propelled boaters, but any small boats that can land at sites can use them,” she said.

The trail can be accessed from Squamish, West Vancouver at Horseshoe Bay, Gibsons, Bowen Island and McNair Creek Park on the Sunshine Coast and maps of the whole network will be posted at Squamish, Howe Sound and Gibsons, according to McMillan.

“All of the marine sites, including the [provincial] parks, make up the Sea to Sky Marine Trail, and also part of the larger BC Marine Trail Network,” she said.

In addition to the provincial sites, there are seven other sites that have yet to be developed, but are under the Forest and Range Practices Act, which means the sites can be used for camping, McMillan said, adding cleanup work on the sites will go ahead once a grant from the Trans Canada Trail Foundation is received.

“Between now and the middle of June, we need to make some improvements to those sites, primarily to create a safe landfall and create tent sites,” said McKeever.

The Squamish opening ceremonies are planned for June 14 at Nexen Beach.

The date happens to be exactly 223 years to the day when Captain George Vancouver and Lieutenant Peter Puget first sailed up Howe Sound and met First Nations people, McMillan said.

The men were invited back to the First Nations village, possibly to the St’a7mes village, according to McMillan.

“That is a pretty neat coincidence,” she said.

Plans are still being firmed up for the Squamish opening ceremonies, but there will likely be a paddle over to the St’a7mes reserve, McMillan said.

For information or to help with site cleanup contact Gordon@seatoskytrail.ca.