For the third season in a row, council and vanlife advocates clash over proposed regulations.
May 5, 2021 12:06 PM By: Steven Chua
Previous Next
1 / 1 Glacier Media file photo
Expand
Previous Next

Despite opposition from vanlifers, District of Squamish council made a divided vote in favour of a bylaw that would impose substantial restrictions on vehicle living and camping.

Broadly, the proposals include seasonal restrictions on sleeping on roads. It would also remove a prohibition on sleeping and camping in parks overnight, but would prohibit tent cities. The regulations would also ramp up enforcement hours, add a seasonal staffer and install amenities like portable toilets and bear-resistant garbage totes.

On May 4, council voted 5-2 in favour of giving three readings to a set of bylaws that staff characterized as measures to manage tourists while giving the homeless flexibility to find shelter.

Councillors Jenna Stoner and Chris Petingill were  opposed. The rest of council voted in favour of the bylaws. As the bylaws have passed third reading, they are expected to be adopted at the next council meeting.

Despite staff’s reassurances that the bylaw’s intent is to target unruly visitors who spread trash, attractants and noise throughout town, a representative from the Vehicle Residents of Squamish Advocacy Group said the bylaws are written too broadly.

Leanne Roderick, a director with the group, said these bylaws fail to distinguish between full-time vehicle residents of Squamish and tourists who may be spending a season living in their car.

“We are opposed to Bylaw 2829 because it does not address these undesirable behaviours and activities,” said Roderick.

“Bylaw 2829 prohibits, and, in some cases, closely regulates sleeping and sheltering. Sleeping, particularly sleeping in a parked vehicle or trailer in a parking space, is not a problematic behaviour in and of itself. For this reason, the proposed camping bylaw has no business being tucked into this visitor management strategy.”

Roderick said the bylaws were being rushed forward within days despite promises for extensive public engagement.

She added the bylaws were indiscriminate in their breadth. For example, Roderick noted the regulations prohibit anyone from staying in their vehicle for more than an hour, but fail to distinguish between a vehicle resident and a tourist. 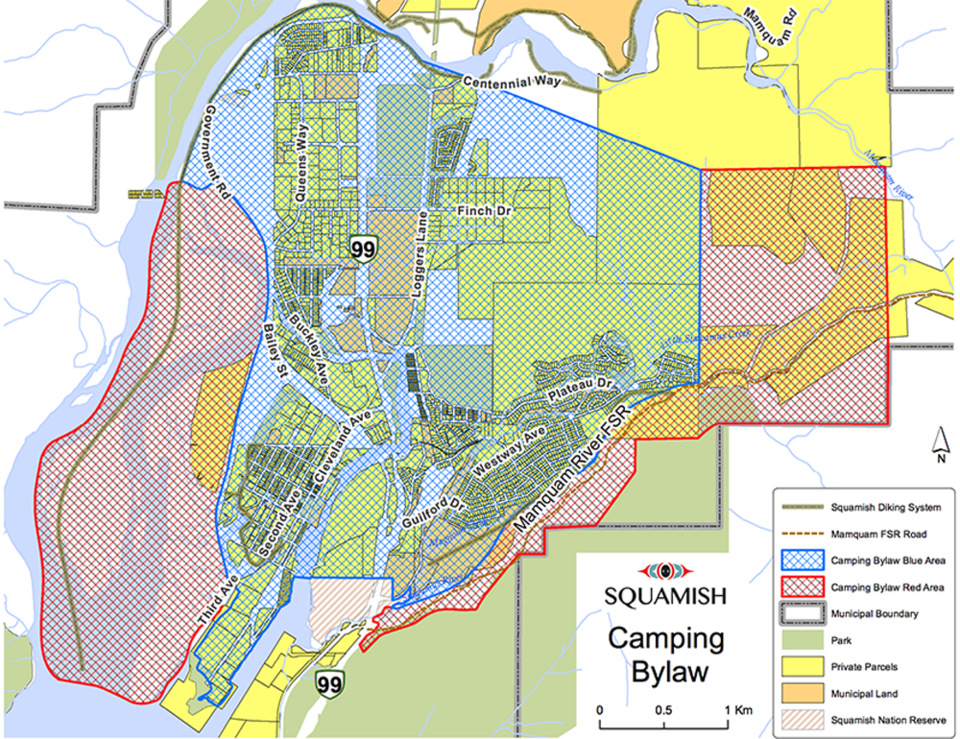 The blue area shows the zone where homeless people can find shelter. Recreational campers may not set up camp in that area. - District of Squamish map

In the bylaw, a zone dubbed the blue area outlines places where homeless people will be allowed to shelter, but recreational camping may not occur.

That area covers much of downtown, Valleycliffe, Loggers Lane, the business park and areas in between.

The blue area does not include the Mamquam River Forest Service Road, the Spit, and the Estuary.

It also does not include the Garibaldi Highlands area or Brackendale — it does not go north of Mamquam Road.

“I’m just unclear as to why we’ve limited it to some areas and not others, and the rationale behind that still seems unclear to me….I think it deserves a broader approach across our community and not singling out one half of the community versus the other,” said Coun. Stoner.

She added she felt the bylaw was inconsistent in some areas.

Staff said the blue area was chosen based on where services are and are areas already frequented by the homeless.

Coun. Pettingill said the bylaw was too broad.

He said it needed direction — some sort policy that would make clear its intentions were to target visitors and not the homeless or vehicle residents.

Council would later vote in favour of asking staff to present a policy of this sort at the meeting where this set of bylaws would be adopted.

On the other hand, Mayor Karen Elliott said this was a needed enforcement tool, and that bylaws cannot be worded to the degree that is being asked for.

“This is our effort focused on visitor management. Unfortunately, bylaws cannot be written with subtlety.”

Coun. John French said it was necessary to add some degree of clarity to rules for this upcoming tourism season.

He said the bylaw could be adjusted as needed depending on what happens.

“We’ve spent the past year moving in uncertainty on this issue. But it’s time to bring certainty to the season ahead,” said French.

“I think we still have work to do on this issue and that this isn’t the end-all-be-all. And I do look forward to seeing new information and new data come here from this camping season, so we can evolve this into 2022... and hopefully have a more effective regime in place for the 2022 camping season.”