Primacorp says tying its land too closely to the Squamish school will cause financing problems.
Mar 31, 2021 10:11 AM By: Steven Chua 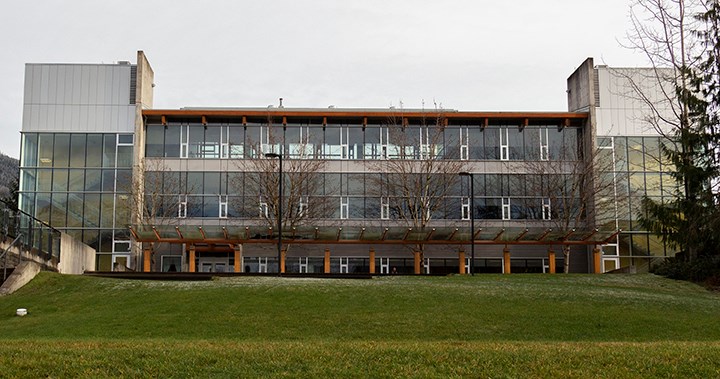 The Quest University Canada campus. File photo/Norman Galimski
Quest University's landlords aren't happy with a proposed zoning amendment that they say ties them too closely to the school.

Council has been deliberating what municipal staff have dubbed a housekeeping amendment, which, by their account, does a better job of clarifying the definition of what constitutes a university.

A staff report says the intention is to provide better alignment with the 2040 OCP's Sea to Sky University Sub-Area Plan.

However, the CFO of Primacorp Ventures, which is Quest's landlord, appeared before District council during a public hearing on March 23, urging elected officials to shut down the bylaw.

"Lenders seek collateral to protect their interests, and further tying this property to its existing tenant would be less than appealing to any lender, or to anyone for that matter," said Robert Hibberd. "If we can't obtain financing, our ability to provide additional financing to Quest University in the future will be impacted."

By his account, the District's proposal would make it harder for the company to get a loan.

"I must say that I am puzzled that a decision would be taken to amend the zoning to tie a landlord even tighter to its tenant during the long term of a lease that is already in progress," said Hibberd.

"I believe the authors of this amendment haven't considered the financial impacts on us as the landlord or on Quest University as its only source of financing."

In a letter to council, another Primacorp executive said it would also hinder the company's choices should the school go into default.

"Most lenders won't consider offering financing on a property with a single tenant has just emerged from CCAA. Now, if Quest University were to ultimately fail, it would limit and potentially destroy our ability to find a replacement tenant," wrote Scott Fehrenbacher, CEO of the higher education division at Primacorp Ventures.

If Quest is no longer a tenant, he wrote, the amendment would prevent Primacorp from leasing the space to an alternative education institution.

Under the current definition in the Official Community Plan, the following language is used to describe a university:

The proposed amendment would change the language to the following:

"University means academic, administrative, recreational, parking, research and development, and maintenance facilities customarily associated with a post-secondary institution, and which is authorized to grant degrees by the Ministry of Advanced Education, Skills and Training under the Degree Authorization Act [SBC 2002] Chapter 24 or the Sea to Sky University Act [SBC 2002] Chapter 54, and is reviewed by the Province of BC Degree Quality Assessment Board, and where a majority of the institution's programs are degree granting / conferring programs."

It was a change that Primacorp contested might even be unlawful.

Blake, Cassels and Graydon LLP, the legal counsel of Primacorp, wrote to the District warning them about the implications of the proposed amendment.

Roy Millen, a partner at the law firm, wrote the District's amendment goes beyond zoning by stipulating what degree-granting authority must be held by a post-secondary institution in order to operate on the Quest lands, and what educational programs must be offered by the institution.

"This is well beyond the District's jurisdiction and is therefore unlawful," he wrote.

Millen said municipal bylaws that regulate education are unlawful and are thus liable to be struck down in court.
A municipal spokesperson told The Chief that the District does not have any comment on Primacorp's opinions on this matter.

Primacorp was not the sole entity providing feedback.

Quest University staff suggested a change that they said would accurately represent their situation and allow the school to develop non-degree programs as needed.

District staff took those suggestions, and with some additions of their own, put forth a revised proposed definition that reads:

"University means academic, administrative, recreational, parking, research and development, and maintenance facilities customarily associated with a post-secondary institution, and which is authorized to grant degrees by the Degree Authorization Act [SBC 2002] Chapter 24 or the Sea to Sky University Act [SBC 2002] Chapter 54, and where a majority of students of the institution's programs are enrolled in degree granting / conferring programs."

Ultimately, council voted in favour of scrapping their initial proposed amendment in favour of the definition that had input from Quest staff.

By rescinding the initial proposal and replacing it with the revised one, a new public hearing has been triggered. It will be scheduled at a yet-to-be-determined future date.

Primacorp told The Chief it did not have comment on the proposed revised definition.

***Correction, April 1, 2021: A previous version of this story reported the revised proposal was a definition created by Quest staff. The revised definition had input from Quest University staff, but was not created entirely by the school's staff. Wording for the definition has also been corrected.