Smoked out in Squamish 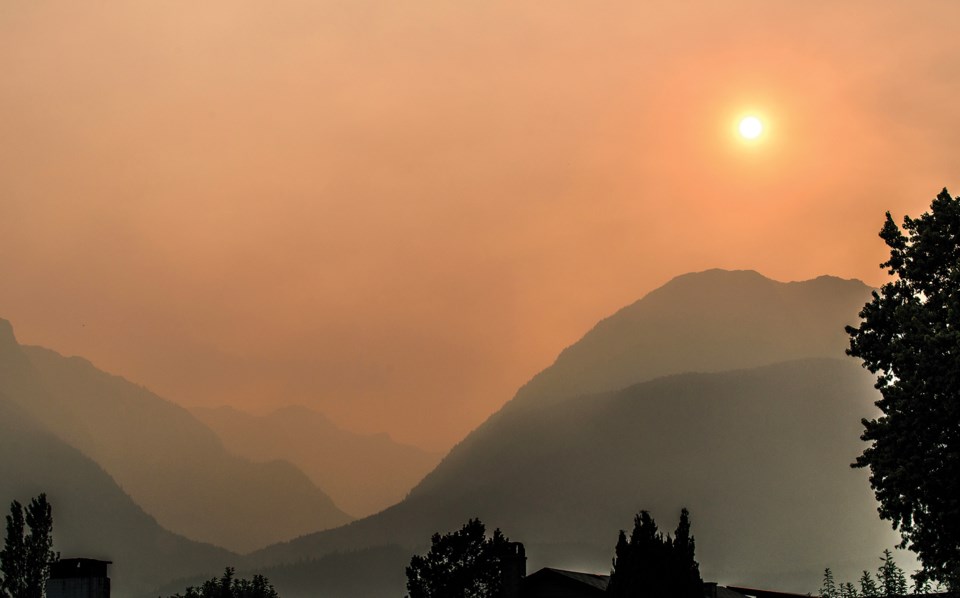 Daytime in Squamish this week looked like a Mars landscape as smoke filled the district from fires burning north of Squamish. Air quality advisories for the district will continue because of high concentrations of fine particulate matter due to the wildfire smoke, Environment Canada reported on Wednesday.Brian Aikens

A fire expert warns it may be a long summer of smoky conditions in the district.

Air quality advisories spread across the Lower Mainland over the weekend and to Squamish Monday as approximately 184 active forest fires burned across B.C.

The smoke impacting Squamish is primarily from three fires north of the district: the Elaho, Cougar Creek and Boulder Creek fires, according to fire information officer Melissa Klassen.

The largest of the fires, the Elaho, which was discovered June 14, was an estimated 20,000 hectares and uncontained as of Tuesday after chaotic weekend winds undid containment established by fire crews during recent weeks.

Given it is early in the peak forest fire season, which usually begins mid-July, and that there has already been so many large wildfires in the region, smoke is expected in the district for much of the summer, Klassen said. “Given going forward these fires are going to continue to burn,” she said  “There is going to continue to be smoke.”

The severity of the smoke will vary, she said.

When air quality readings reach a 10 indicating high health risk, as they did in Squamish Monday, health authorities advise anyone with respiratory illnesses, such as lung disease, to stay indoors, preferably with air conditioning, and to minimize activity.

“Activity does increase the amount of particulate matter that is taken into the lungs because when you breathe harder and deeper, it just gets deeper into the lungs,” said Chris Carlsten, associate professor at UBC’s school of population and public health.

When people are warm, thanks to rising temperatures in the summer, they also breathe deeper, so keeping cool is important in smoky conditions, he said.

“The long-term implications of this particular event are much less significant than the short term,” said Carlsten, who is an expert on climate change and health.

“If this were to be a chronic air quality problem, like it is in some parts of the world, that would be another story, but we are fortunate enough that this should be short-lived.”

Compared with places like Beijing, China, B.C. has very good air quality overall, but with the possibility of more fires thanks to climate change, air quality may become a larger concern for people on the coast, he said.

“Forest fires are definitely increasing in frequency in British Columbia, including in the Lower Mainland, and that may be a significant problem in that if that happens more and more, then the general air quality may degrade,” he said.

“With climate change and warmer climates, which we do believe is related, then that could be a serious problem.”

“It is the climatic conditions. That we have way less rain than we normally have, the fact that it is way hotter than it normally is, that is consistent with climate change and consistent with these big fires that are hard to put out because conditions are so dry.”

In 2014, some 369,169 hectares were burned in B.C., more than had burned in the previous nine years, according to the BC Wildfire Service data.

This season, 222,000 hectares of the province have already burned from 866 fires.

Much time and money has been spent to improve air quality, but ironically the damage forest fire smoke could do may negate some of those improvements, Carlsten said.

“So it is very different from vehicles and transportation and fuel and all those things that we fought for, and while forest fires will tend to be seasonal and so it won’t necessarily be an everyday thing, they seem to be increasing in frequency and if that continues that could represent a significant setback in air quality in the region,” he said.

On Monday, the provincial government asked other provinces for forest fire help.  Ontario will send 70 personnel, according to reports.