Sunniva Sorby is in the Arctic collecting data for NASA and other scientific organizations
Oct 17, 2019 6:00 AM By: Steven Chua 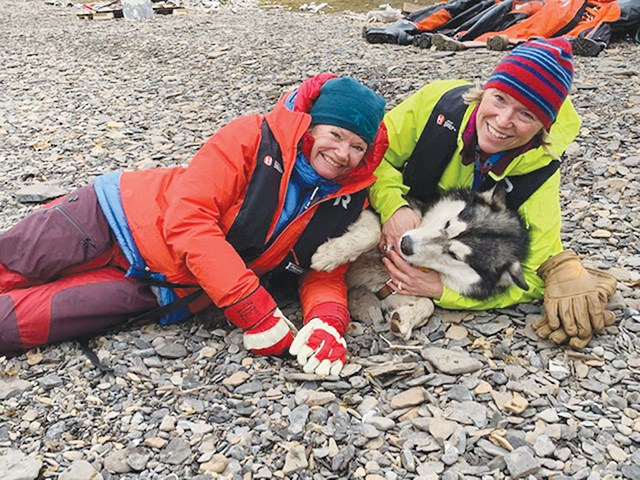 In a place where the effects of climate change have already prompted the destruction of hundreds of homes, a Squamish adventurer is making her contribution to research on our changing environment.

Their expedition started in August and will end in May. They will be collecting data for scientists at NASA, The Scripps Institute of Oceanography, The Norwegian Polar Institute and The Norwegian Meteorological Institute, among others.

“Us collecting data for nine months in a row is almost unheard of up here for these scientists, which is why it’s so interesting to them for us to be collecting this data,” Sorby told The Chief over satellite phone.

“They’re going to have information they can measure over a long period of time.”

The pair have been living in a hut called Bamsebu, which is 140 kilometres away from civilization.

It’s a different world out there — one where people joke that there are more polar bears than human inhabitants.

“We’re very engaged in the rhythms of the natural world,” said Sorby.

“It’s very powerful to be here to witness all of this and feeling it at a cellular level.”

While climate change may be an abstract concept for many of us, in populated areas of the Svalbard archipelago, this is not the case.

Last year, Aftenposten, Norway’s largest paper, reported about 250 houses were demolished in Longyearbyen as a result.

People aren’t the only ones affected. Warming temperatures have cleared out sea ice in some fjords, leading to changes in animal habitat.

Scientists fear the elimination of sea ice could hurt polar bears that rely on it for hunting. Seals and other animals rely on it for rearing their young, among other things.

In one particularly dramatic example, there was a case where 200 reindeer ended up starving to death in July, according to Agence France-Presse.

Warming temperatures created unseasonal rain, which quickly froze when it hit the ground. The result was that it created a layer of ice over the vegetation that the reindeer couldn’t breach.

As a result, they went hungry.

Sorby said there haven’t been any breakthrough observations one month in, but she hopes there will be valuable findings down the road.

One of the tasks they’ve been doing is collecting saltwater and the phytoplankton in it.

This could give perspective into how warming temperatures have caused freshwater to go into the ocean, which could hurt the microscopic plants.

Marine plants create about 70 per cent of the world’s oxygen, according to National Geographic.

“Everyday citizens are collecting valuable data for the scientists, and... the scientists are taking that data collection seriously.”