Squamish dad hopes to slow down speeders on Tantalus 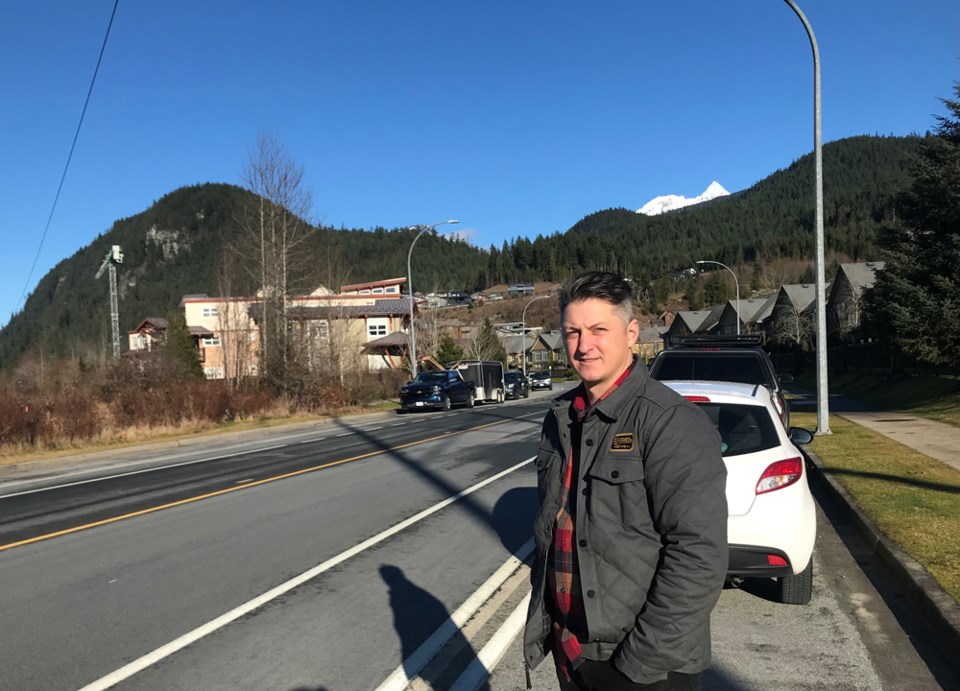 Tantalus Road resident Matt Clayden, who says the stretch of road near his house has seen an increasing problem with speeding.Jennifer Thuncher

Tantalus Road resident Matt Clayden is asking that something be done by the municipality to slow people down along his street.

A father of two small children, Clayden has lived on Tantalus, just past the Executive Suites Hotel and Resort, for five years and says speeding has become an increasing issue.

People who live in the growing SkyRidge development likely use the access road, but the Dowad Drive exit to Highway 99, which wasn't there before he moved to the area, is most likely the destination of many.

Clayden told The Chief he is speaking out to draw attention to the problem.

The speed limit is 50 kilometres per hour.

"On a regular basis, cars are flying down here."

And there have been dramatic crashes outside his house, including a recent one that involved multiple vehicles at about 2 a.m. on Jan. 14.

Clayden didn't see that crash, which RCMP said led to the arrest of a 34-year-old North Vancouver driver, but he was one of the first on the scene after the intense noise of the collision woke him up.

He screamed to his wife to call 911 and ran out to the street.

The driver was pinned behind the wheel and had to be removed by first responders.

(RCMP have not said speed was a factor in the crash.)

Clayden said a driver hit his truck eight months ago when it was parked on the west side of the road, causing $17,000 in damage.

His neighbour's parked vehicle was also damaged in that incident and the most recent collision.

"That is why you will notice no one parked on that side of the road," he said.

Previously, when he parked on that side of the road, he said, there were several occasions when he had to pick up his kids and rush to his truck to avoid getting hit.

"Unfortunately, the truck doesn't fit in the garage,” he said. He now parks on the east side of Tantalus.

The District of Squamish says speeding is an issue throughout town.

"Speed is the responsibility of each and every one of us in the District and is an issue throughout Squamish, and, therefore, we have received requests from every neighborhood within the District," reads an emailed statement from District staff.

The District keeps a traffic-calming list and the staff prioritizes the requests received.

Roads that do not have proper pedestrian/cyclist infrastructure such as sidewalks and bike lanes are prioritized above others, staff said.

Tantalus Road is on the District's priority list, as 15% of drivers drive above 61 kilometres per hour, however, with bike lanes and sidewalks available, it is not currently one of the highest priority concerns, according to the municipality’s statement.

"Education and enforcement is the typical first step in our traffic calming policy and if not successful/working, we look into engineering solutions, which require a budget for design and construction and would be considered as part of the District's annual budget process."

District staff note there is a 50 km/h sign near the beginning of Tantalus Road and a speed reader is placed on the road periodically, which displays vehicle speed and then feedback, in the form of a happy/sad face, if drivers are within or exceeding the speed limit.

"The speed reader is placed periodically rather than permanently as drivers become accustomed to it resulting in the sign becoming less effective. The District continues to work closely with the RCMP to identify priority areas for speed enforcement."