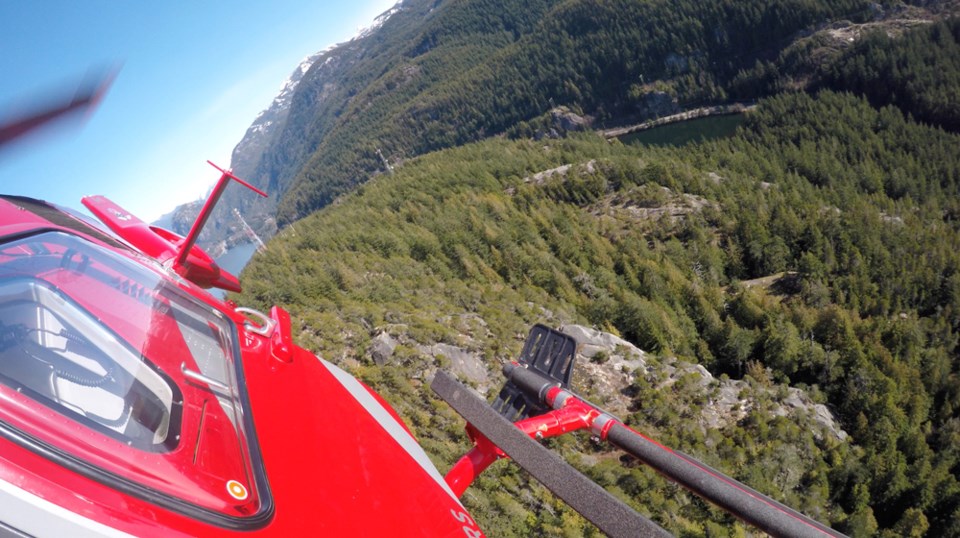 Crews airlifted a patient out with a longline and brought her to paramedics. (File photo)Rob Munday/Blackcomb Helicopters

After a relatively calm period, Squamish Search and Rescue responded to three calls within 48 hours earlier this week.

Rescue manager B.J. Chute said SAR is generally dealing with calls involving locals, which is a positive sign, given COVID-10 travel restrictions that have recently been enacted.

"It's been relatively quiet for Squamish SAR for the past couple of weeks," said Chute.

"From what we're seeing call-wise, we haven't responded in the past several weeks to any people outside of the Sea to Sky Corridor who are recreating here in Squamish. Now that doesn't mean that there aren't people here, but, certainly, our involvement has been pretty minimal to date with people outside the area."

First, a female rider fell while biking on some rock rolls on Somewhere Over There, a black diamond trail off the Powerhouse access road by the Mamquam River Forest Service Road.

The rider had injured her arm around dinnertime, prompting a SAR e-bike team and a helicopter crew to come to her aid.

Crews decided to airlift her out with a longline and brought her to paramedics.

Shortly after, there was a mountain biking crash at Leave of Absence, a blue trail in the Alice Lake and Highlands area.

With the help of her partner, she made it down to Edith Lake, where she met with SAR crews.

Rescuers brought her back to her car, where paramedics assessed her.

A rider took a fall while biking over a rock roll and injured her head.

Rescuers happened to be in a virtual training session at the time, so the response was quick.

Chute said three members who live in the area rushed to the scene, while the rest of the team, along with Squamish Fire Rescue, followed up with a stretcher and brought her to paramedics.

Chute said the call volume this year has been greater than usual.

However, so far, the uptick hasn't been at the level other neighbouring rescue teams have been dealing with, Chute said.

"I don't think it's not going to happen — I just think it hasn't happened yet," he said.