Mayor and developers herald the link between major residential project and Highway 99
Oct 6, 2020 10:53 AM By: The Chief Staff 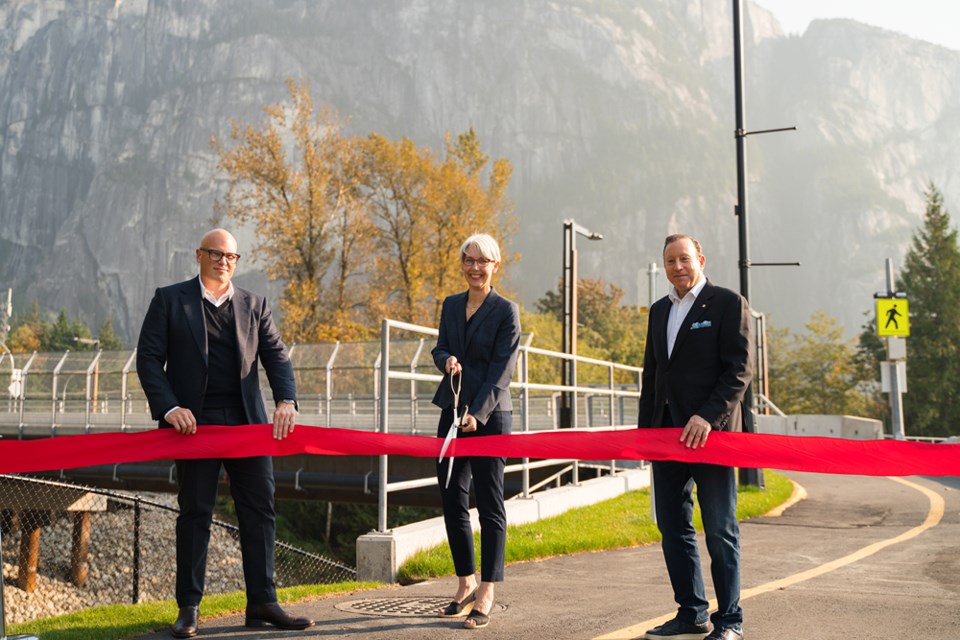 Squamish’s mayor joined the developers of the Waterfront development, now dubbed the SEAandSKY project, in celebrating the finish of a new overpass that links the residential project with Highway 99.

“As the community of Squamish continues to grow, this infrastructure serves as an important future connection to Downtown Squamish,” said Mayor Karen Elliott in a news release.

A ceremonial opening was held Friday, Oct. 2, though the overpass has been operational since the summer.

"Working with the development community to invest in infrastructure that supports neighbourhood connectivity and livability is a key component of our management and planning for growth. We look forward to the building out of this new neighbourhood that will create an important link for all of our southern neighbourhoods to our waterfront and eventually downtown."

Elliott was joined by the two developers behind the project, Lorne Segal, the president of Kingswood Properties, and Dale Bosa, CEO of BlueSky Properties. BlueSky is a Bosa family company.

“This is a milestone for us and for the community,” said Segal in a news release. “Connection to the greater community is really important to us and a long time coming. Our partners at BlueSky have worked hard to transform this former industrial site, and we are excited to mark this moment in the community’s evolution.”

“This unlocks an important and previously inaccessible area for thousands of new families for years to come,” says Wayne Vickers, vice president of development for BlueSky Properties in a news release. “It’s the first step in creating a lasting connection to Squamish not only through key infrastructure investments, but also through the upcoming pedestrian bridge, trail network, amenities and the homes themselves. It signifies years of work put into this project by a large number of people and we are really grateful for the partnerships that have led us here.”

As of now, there are 88 townhomes complete to date, and over 100 homeowners already living in them.