Jillian A. Brown is on the adventure of a lifetime traversing the U.S. by canoe from Oregon to Florida
May 31, 2018 3:00 PM By: Megan Devlin 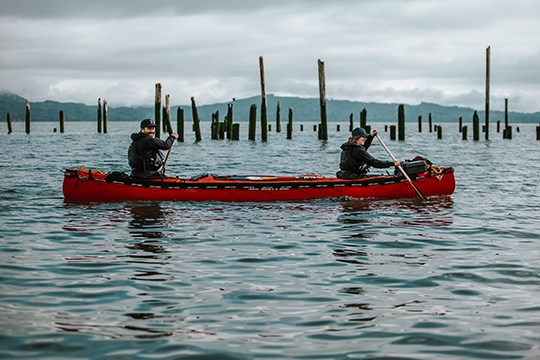 A woman from Squamish is on the adventure of a lifetime canoeing across the U.S. from the Pacific Ocean to the Atlantic Ocean.

If she’s successful, adventure photographer Jillian A. Brown will be the first woman ever recorded to complete the route.

“The best way for us to describe it is more people have walked on the moon than have done this,” she said.

She spoke to The Squamish Chief from Lewiston, Idaho on the 25th day of the 210-day trip that will come to an end in the Florida Keys sometime in November.

Brown and her trip partner, social worker and long distance canoeist Martin Trahan, were getting set to embark on their portage across the continental divide using a canoe cart.

“It’s like pulling 300 pounds on two tiny flat tires with 80 pounds on your back,” Brown said.

The pair are now three weeks into their 7,600-kilometre journey and have already paddled upstream along the Columbia and Snake rivers. Brown has photographed eagles, ospreys, owls, seals and even a rattlesnake after nearly stepping on it. She’s also marveled at floating homes along the Columbia connected by dock sidewalks that ebb and flow with the tides.

But while the trip has been beautiful, it’s also been challenging.

She said the rivers are more than two metres higher than usual this year, so portages around dams that were supposed to be two kilometres long have ended up being 10 to 14 kilometres.

“The currents we’re going against are up to 30 kilometres per hour and we’re looking at each other, like, we have to do this,” she said.

On top of that, they’re travelling through “civilization” instead of pure wilderness like her previous long-distance kayak trips in places like Alaska. That means finding a place to camp amidst private property is another challenge.

“But as soon as you go and talk to somebody every single person is like come on in, what can I do for you,” she said. “Park rangers have even driven half an hour to open up showers that are closed for us.”

Brown grew up in Winnipeg, Man. and says she became acquainted with the outdoors from an early age thanks to her family’s cottage on an island outside of Kenora, Ont. Her father, Brian Brown, said she used to go out into the wilderness as a pre-teen with a disposable camera and come back with marvelous pictures of animals she found.

“She has this knack to get really close,” Brian said. “We weren’t allowed to go because we’re too noisy and we scare everything.”

Flash forward nearly two decades and her mother, Kelly Brown, said the walls of their cabin are now covered with her photos of frogs, deer, foxes, herons and even the black bears that live on the island.

“She thrives on this. She needs to be out in nature and with wildlife and in the elements,” Kelly said.

Her parents aren’t scared either. Instead, they liken her career to that of an airline pilot or an astronaut — one with inherent risks and incredible rewards.

The Browns drove down with their daughter to Astoria, Or. to watch her and Trahan launch their canoe and begin their trip from a cloudy marina dock on April 28.

Brown only met Trahan, her adventure partner for the next six months, for the first time in person three days before they set out. She said Trahan had been planning the trip for a year, and connected with her over social media and invited her to join.

From there, they became fast friends.

“We both trusted that it was going to work out,” she said. “I couldn’t have asked for a better partner. It’s like we’ve known each other forever.”

Those curious about the trip can track their progress via GPS at on their Coursing Through America website.