COVID-19 protocols implemented; pulp that moves through the terminals used for PPE
May 8, 2020 3:47 PM By: Jennifer Thuncher 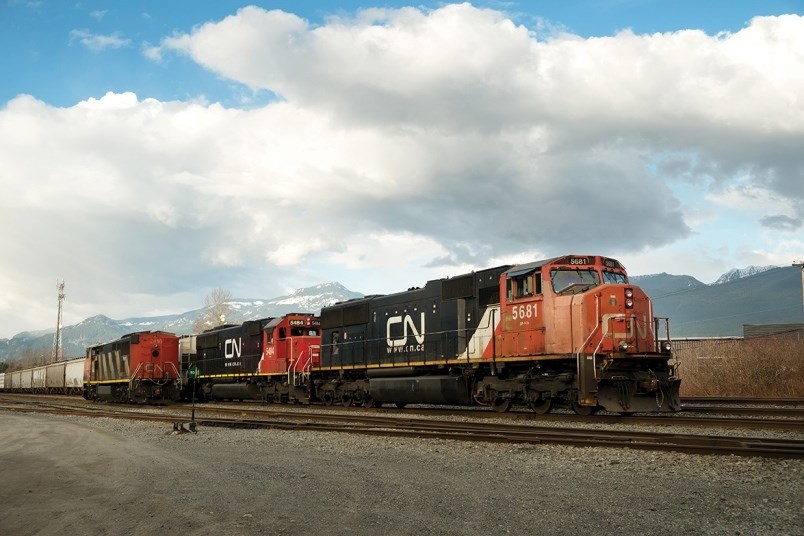 With the pandemic and then a wildfire, some in Squamish may have missed that since early April, Canadian National Railway suspended its service between Williams Lake and Squamish.

CN says this is due to the decline in customer demand that makes it no longer feasible for CN to maintain the service.

Customers on the route were told in advance and advised that their goods would be rerouted via the Prince George - Kamloops – Vancouver corridor, according to CN.

"This is not a decision taken lightly. We are sympathetic to the disruption of this change on the lives of our employees, particularly in the current environment, and they may have an opportunity to remain with CN in other locations. Based on collective bargaining agreements and depending on seniority, they may elect to work at other CN locations in B.C. and where there is a shortage of personnel." said CN senior manager of communications Jonathan Abecassis, in an email to The Chief.

"CN recognizes and understands that these are unprecedented times and wants to reaffirm that we are focused on the health and safety of our employees, the essential movement of critical supplies for all Canadians, and a safe and reliable service for our customers."

Mayor Karen Elliott said the District was not alerted to the change.

"The ability to move goods by rail is important to supporting local and provincial economies. Although there will be some reduction in train traffic, it's more important to consider the impact on customers in the corridor in terms of economic and environmental costs and shipping options. This decision was made without consultation with the local governments that will be impacted. Furthermore, the decision was made in the midst of our pandemic response,” she told The Chief.

“I will be working with our local businesses and my colleagues to the north to determine our next steps."

Paul Morris, Squamish Terminals' terminal manager, said that communication from CN on the closure could have been better.

"But we can agree we are all trying hard during these challenging times," he said.

”For Squamish Terminals, we have a strong relationship with CN — with representatives locally, regionally and nationally. It is in the corridor’s best interest, as well as the communities in which our customers operate, to work closely with CN and government to reinstate the North corridor service as soon as possible; we continue to work closely with the various stakeholders on this matter," he said.

The terminals hasn't seen much of an impact from the curtailment, Morris said.

"It wasn't a great percentage that was coming down this north line."

The majority of cargo that comes to Squamish goes through the CN Thornton-Railyard, underneath the Port Mann Bridge.

"The pulp from Prince George and Quesnel will still come down through Vancouver and then to Squamish, through the existing corridor," he said.

"At this point and time we don't anticipate it impacting us negatively. It is sort of business as usual."

Operating the port during the pandemic

Morris said that business at the port has remained steady through the pandemic, as transportation has been deemed an essential service.

"One of our main products, pulp, is an essential supplier that is used in the production of masks, gowns, personal hygiene," he said. "Steel commodities are used in the energy sector and infrastructure projects."

Like most businesses, however, there have been changes at the Squamish Terminals as it adapted to health authority restrictions in the face of the pandemic.

"We have been really fortunate to stay working through these challenging times, but because we have put some really good measures in place — that the government has put out— it has really worked well for us," Morris said.

"Front line workers, who are hands-on — driving the equipment — we have added additional tents on site so when there are coffee breaks and lunch breaks it gives them the opportunity to be six-plus feet apart," he said, adding extra cleaning services have been put in as well.

The office staff is down to about 25% on-site and the rest work from home, he added.

We are extremely appreciative and proud of our dedicated and hardworking employees, whether they are working on the front line or working from home," he said.

Eric Andersen, who spoke to The Chief as a local history buff and not in his role as a sitting councillor, said the rail line between Squamish and Williams Lake is almost exactly 100 years old.

"The announcement of this temporary suspension of operations on the line can prompt us to consider its history and what that can tell us about its future," he said.

Andersen noted that following the announcement of the intent to sell BC Rail to CN almost two decades ago, the idea of permanently closing part of the Squamish line was floated in 2002.

But the idea was opposed by many stakeholders, including the provincial government.

"The line has supported the development of a large part of B.C. and the export of numerous products, from cattle to pellets," Andersen said.

He acknowledges the amount of wood transported from the Interior has diminished in recent years due to beetle epidemics and forest fires, but says as a renewable resource, it is likely to increase again.

"Our Interior export industries — including First Nations owned industries — will again in [the] future need our railway line," he said, adding that in southern B.C., several rail lines and transportation corridors are vulnerable to natural hazards and that vulnerability is likely to increase with climate change.

"There have been numerous examples over the years of rail line disruption events illustrating the importance of the old 'BC Rail' line," he said.

"So, history tells us the line is not expendable."