If there’s one thing that everyone can agree on in Squamish, it’s that development is happening at breakneck speed.

As a result, the District of Squamish is creating means to guide the way in which development occurs.

It all started with public feedback for the 2018 Official Community Plan.

“What we heard from people is that they recognized we were going to be a bigger community but they wanted to protect that sense of a small town and still knowing your neighbours,” said Mayor Karen Elliott.

“And so that makes our neighbourhoods become fundamentally more important when we think about how we plan our community.”

Thus, the idea was to identify neighbourhoods in the community and create plans for them.

One of these is the Loggers Lane East neighbourhood plan, which was adopted in February.

The plan represents the general direction in which District officials feel development in the neighbourhood should occur.

It serves as a blueprint for the area east of Loggers Lane and encompassing Robin, Finch and Raven Drive.

In the plan, the area is divided into several areas.

The most eastward, hilly part of the area is designated hillside housing. The centre is designated rural and low density, with mixed-use further to the west. At the southwest corner is industrial. The entire neighbourhood is expected to house between 2,000 to 3,000 people when fully built out.

The document does not represent a rezoning, but provides a map for council that will help guide future rezonings. If anyone wants to rezone their land in the area, it still must go through a public process.

As a result, some amenities are encouraged as a result of the community’s needs. For example, in this plan, daycares are permitted throughout the entirety of the neighbourhood.

While it’s one thing to look at the plan on paper, it’s another to see how things may change on the ground.

To this end, The Chief went on a walk-through tour with Mayor Karen Elliott and the municipality’s director of planning, Jonas Velaniskis, to get a real-time view of the neighbourhood and how the plan may guide its change.

At the corner of Finch and Loggers Lane lies a lightly treed area with long grass and overgrown paths. A couple of development signs have been posted — possible foreshadowing of what may come.

Should everything go according to plan, this area will be filled with multi-family residences, such as apartments, and commercial spaces including restaurants, cafes, groceries and more.

The mixed-use development, or MUD, zone represents a blend of residential housing and commercial development.

The idea is to create an area where developments are 40% residential and 60% commercial, with an opportunity for a 50-50 split between residential and commercial if a significant amount of rental housing is included in the mix.

Standing on the corner of Finch and Loggers Lane, Elliott said that a big component of this type of zone would be the creation of employment space.

“Designating some areas on the Loggers East plan is about making sure that there’s places for people to work that go along with the housing being built. So we can’t just keep building housing and not building employment uses to match with that, or else we will be a bedroom community,” said Elliott.

“That’s not what we’re aiming for.”

Velaniskis said the area was chosen because it’s a central location where people can get their daily needs fulfilled, as retail, coffee shops, office space and some industrial are all part of the MUD zone. 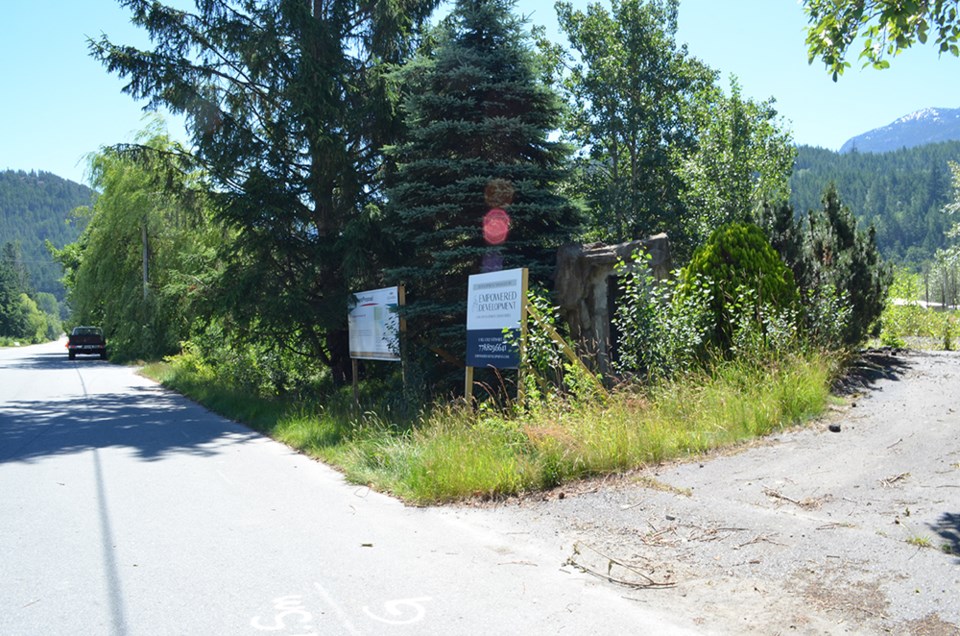 The area near Loggers Lane and Finch is designated as a mixed-use development zone. By Steven Chua

He also added that while this plan only pertains to Loggers East, planners were considering how this area would fit in with the surrounding developments. Staff concluded that this would be an ideal area for people in the surrounding area to get their day-to-day services.

During the public hearing for this matter, one of the concerns was regarding the abundance of commercial space.

Having developments with 60% of commercial space is highly unusual and creates risk that much of the building will be vacant. There isn’t nearly as much demand for commercial space as there is for residential, it was argued.

Velaniskis said this is a common concern for developers, who base much of their business on residential sales.

“However, in Squamish, we don’t really have a problem of vacant commercial space. So it’s an indication that once these spaces are built and once the population is in the area, the spaces get absorbed,” he said.

“The challenge is yes, when you are actually building — when you are starting from scratch in the neighbourhood — there may not be that initial demand. But we know that when it’s built and the people are moved in, that demand is there.”

Power lines extending from north to south from beyond Raven Drive past Robin Drive in the western quarter of the neighbourhood pose a constraint to development.

Nothing can be built under the hydro corridor.

A number of creeks are also in the area, and the mandatory provincial setbacks from waterways limit the development potential of those areas. 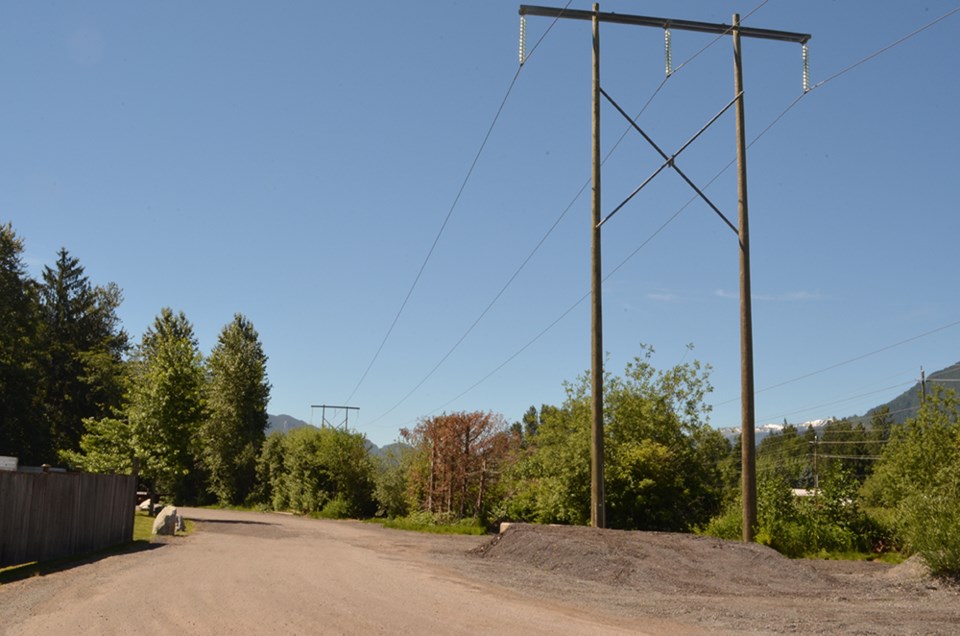 The power corridor cutting through the neighbourhood presents design challenges for the area. By Steven Chua

“It really puts some interesting constraints. We have to be creative,” said Elliott.

Velaniskis said it was a very wide power corridor due to it being multiple lines wide.

However, it does represent an opportunity for other things.

“It’s a great opportunity to utilize this space for agriculture, for parks, for gathering spaces and in the kind of environmental areas in some cases intertwined with the corridor,” Velaniskis said.

Just past the powerlines is the centre of the neighbourhood, which, according to the plan, is dominated by zoning that will allow both rural and low-density multifamily.

This means that in future, the area could be covered by spaced out three or four-storey apartments interspersed with equestrian areas, kennels, and community gardens.

Small single-family homes will be allowed as well. Housing clusters with open spaces set aside may pop up and townhouses may also be constructed as well.

Due to the high water table in the area and the riparian areas — zones around waterways — at least 30% of each lot cannot be built upon.

The reasoning is that natural features hold stormwater and prevent it from spilling out, Elliott said.

Without trees, plants and soil to absorb the water, expensive infrastructure will be needed to manage the runoff.

These agricultural-type uses, which are largely recreational in the area, might persist in the neighbourhood for a long time due to the constraints on development, he said.

He predicts it will likely be 70% residential and 30% agricultural usage in the long term.

“I think, generally, in Squamish, we haven’t really seen the conflict between agriculture and residential uses, even...where there are big properties being used for agriculture right next to residential areas. So the kind of industrial style-agriculture is unlikely to be happening in this neighbourhood,” said Velaniskis.

Elliott said that in the face of climate change, food security is still a priority.

Small lots can be highly productive, she noted.

“I think there’s an opportunity for some of the property owners where they do wanna see that agricultural use to partner with someone like the food policy council and really design something that can be useful, that can be farmed on a small scale, but still really add value to our community and to the value of the whole,” said Elliott.

“We’re only limited by our imagination.” 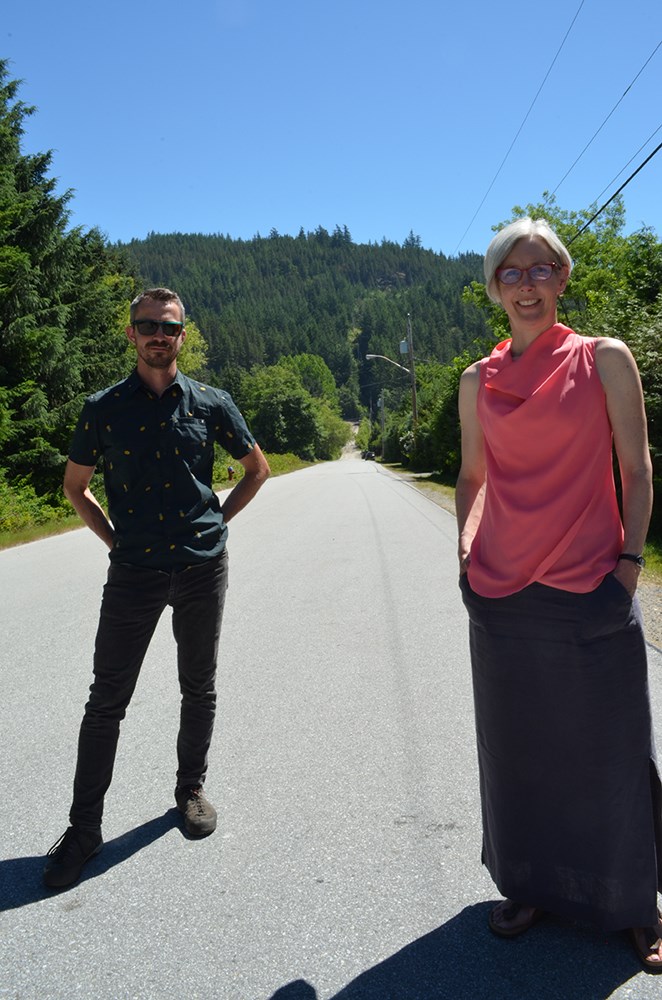 The hillside housing area at the east-most quarter of the neighbourhood is designated for multi-family complexes. By Steven Chua

On the eastmost area of the neighbourhood lies a hilled area filled with trees. The concrete road narrows and turns to dirt.

Over time, the plan’s vision for the area will primarily be for multi-family housing, like apartments and townhouses.

Elliott said the District decided against encouraging single-family housing in the area because of the technically challenging terrain.

As a result, they’ve chosen a denser form of housing they believe will make the most out of the limited land available.

Adding single family to a place like Skyridge was more feasible because the area was already quarried, meaning the altered landscape allowed for a more spread development favoured for single family homes.

Velaniskis said he doesn’t expect the landscape to change dramatically, with much of the alterations to land primarily resulting only from road construction up the hillside.

He said some blasting will happen, but the developers have a responsibility to survey homes in the potential impact area and, normally, developers are responsible for damage to property.

On the corner of Robin and Loggers Lane is what has been designated as general industrial under the plan.

“I think a lot of people get afraid when they hear the term medium industrial, but it is to allow for a use that might be a bit noisier, but, mostly, requires usually a lot of laydown area,” said Elliott.

“And with the hydro corridor that runs through these properties, it provides a great opportunity to maintain that type of employment use and use that hydro corridor for laydown areas. You can’t put permanent structures under it, but you can certainly lay down equipment and supplies there.”

She said incorporating an industrial area is a nod to what’s already happening in the neighbourhood.

A carpentry shop and an industrial storage are two examples of industry already operating in the area.

Velaniskis said that industrial uses have historically been part of most neighbourhoods, but planners shifted away from it after technology from the industrial revolution had harmful effects on surrounding residences.

“We’re not there anymore,” he said. “The industry is much cleaner, and we’re able to bring and incorporate those pieces back in the neighbourhood.”

Thus, as technology has become cleaner and less disruptive, it once again makes sense to incorporate this type of zoning into residential areas.

He said craft breweries, accessory retail shops, small restaurants, carpenters and recreational technology are all things that could pop up in this area.

There is a great need for industrial land in the Lower Mainland, and Squamish is not exempt from this, Velaniskis said.