New developments selling faster than developer can build them
May 21, 2015 10:33 AM By: Jennifer Thuncher 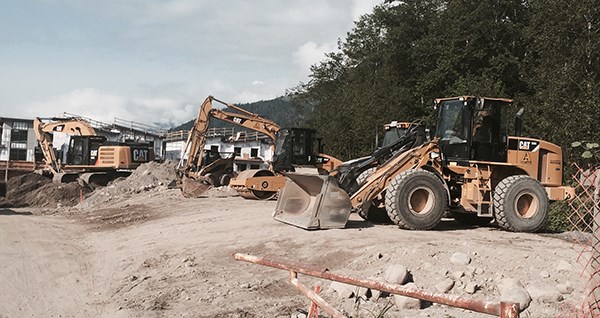 The hum of bulldozers and beat of hammers is a common soundtrack in parts of Squamish as construction reaches a feverish pitch.

Construction on 40, three-bedroom townhomes that will make up The Falls – the fifth of six Solterra developments planned for Eaglewind in the northwest of downtown – is just underway.

The development, which will see people moving in next summer, was 90 per cent sold out of phase one in under three weeks, with 18 of the 20 released units sold, according to Matthew McClenaghan, Solterra’s sales director.

How quickly times have changed.

At one point, Vancouver-based Solterra Development paused on building housing in Squamish.

After building and selling 34 of the planned 50 townhomes for the Solterra Streams development at Eaglewind, the bottom of the market fell out in about 2008.

“It didn’t take a genius to say, ‘Hey, let’s put the brakes on here,’” said McClenaghan.

Construction had already started on the final Streams homes when work stopped.

“We had the 16 foundations [laid] that sat for a few years,” McClenaghan said.

Finally, things started to pick up.

“We started to build and pre-sell those last homes in late 2013 into 2014. We sold them all very fast and prior to having our show home,” he said.

“I think Squamish has lagged a little bit behind in the rest of the market. Where the value has been strong for many years downtown [Vancouver]… Squamish has been the last one.”

This year, the pace of demand has taken McClenaghan and the rest of the sales team at Solterra by surprise, he said.

The final set of 20 townhomes at The Falls was released this week.

“We were just saying again in the office, it is fun again up here,” McClenaghan said, referring to the excitement of people who want to live in Squamish.

He said young families make up the majority of the sales he is seeing.

The families are a combination of local people, North Shore residents and, more recently, Whistler residents.

The typical local buyer “is not necessarily from Squamish, but they have lived here three to five years,” he said, adding many are renters who want to get in to the market and put down solid roots in the district.

The almost-completed Nature’s Gate at Eaglewind Solterra of 50 three-bedroom townhomes sold out in five months.

Townhomes are more popular in Squamish than apartments, so The Falls, which was originally slated to be a condo complex, was redesigned.

“In Squamish, it is storage, people have all the toys: people have their skis and bikes and sleds,” he said, explaining why there is more storage available in The Falls.

The developer is already working with architects on its next development, Summit’s View, to be a mix of townhomes and apartments, which will be located adjacent to The Falls, McClenaghan said.
“Our sales team is saying, keep building,” he said.