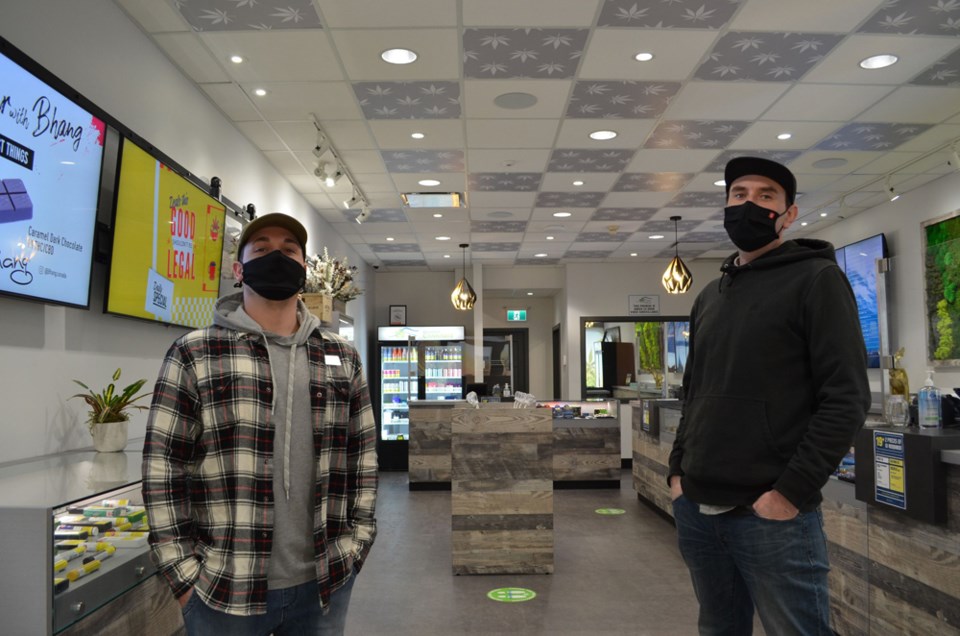 More than a year after Grass Roots Cannabis and 99 North were shut down by the province, two new government-sanctioned dispensaries have opened.

It's a fact that isn't lost on the manager of one of those new stores, The Local Leaf Cannabis, which resides in the exact same unit and building Grass Roots once occupied.

Aimee Myers acknowledges that there is history to the spot her dispensary now occupies; what is now her place of business was previously the site of a government seizure.

In November 2019, the province's Community Safety Unit ordered both 99 North and Grass Roots to close and took their remaining product. 99 North has since reopened in a new location, but Grass Roots hasn't reappeared.

"I know that there's been a lot of support from people that used to come to Grass Roots," said Myers, who moved to Squamish from Ontario.

"We're hoping that people will love and accept us just as much as they loved Grass Roots. It's amazing that almost a year and a half later that we are able to have a legal store somewhere that got shut down."

She said that many people who've been coming to her shop, which was opened on Dec. 19, have been looking for the old managers of Grass Roots.

However, Local Leaf is a different entity.

Myers said that the Squamish location is the second in a two-store chain which is owned by Sutha Nadarajah, who opened up another store in Terrace.

Myers said with the new local store, she hopes to be able to de-stigmatize the consumption of cannabis.

Part of this will happen through what she calls an open-concept layout for the Squamish store.

She said the goal was to create an environment where people feel comfortable buying the product.

She added that too often when you enter a dark store with covered windows, being at a cannabis dispensary feels like a dirty secret.

"I want to bring more awareness and more acceptance to the legalization of cannabis," said Myers.

"The stigma didn't just drop when it got legalized."

The manager of Squamish Cannabis, the other new dispensary that opened in December, is also aware of the context in which his store opens.

"I think it was a loss for the community when that happened," said Anthony Diselice, of the government closures.

Diselice, a transplant from Whistler, said he used to shop at Grass Roots.

"It was pretty sad to see when those stores got closed down for sure. It's come full circle now," he said.

Indeed it has — instead of just being a cannabis customer, Diselice, a former hospitality and liquor industry worker, is now behind the reins of a Squamish dispensary.

The store, which is owned by the Heartland Liquor Group of B.C., came into being in part thanks to the Squamish Liquor Store in the Chieftain Centre.

Heartland also owns the liquor store, and kept the unit adjacent to the shop as a place to keep that store's product.

However, that space has found a new life as a cannabis dispensary.

The store was originally licensed as Chieftain Cannabis, but Diselice said management decided to change the name to Squamish Cannabis out of respect for First Nations.

Diselice said he's keen to move from the craft beer industry into cannabis, as he's excited about the types of product that are now being developed.

In addition to making the product more accessible, Diselice said his goal is to create a store that offers upper-end "boutique"-style cannabis.

One thing he's taken notice of so far is the diversity of customers.

It's a place to meet people from all sorts of backgrounds, he said.

"All walks of life come through the door," said Diselice. "You're getting obviously the young 20-plus-year-olds, and you're also getting the seasoned veterans, some of the seniors that have been smoking cannabis for longer than some of us have been around. So I find that really cool that you're able to see that wide of a spectrum of customers coming through your door."