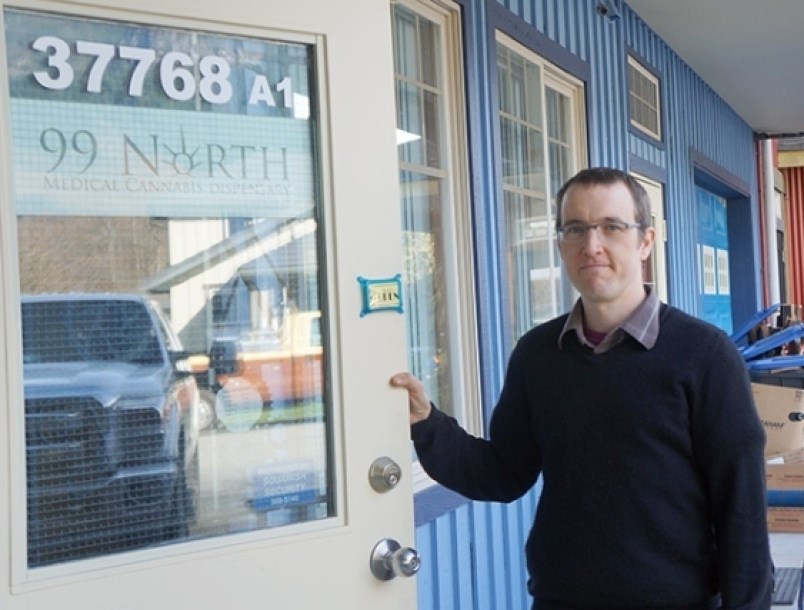 Bryan Raiser in front of his dispensary.

Police continue to look for two men who robbed the 99 North Medical Cannabis Dispensary, on Second Avenue downtown, at gunpoint on Friday afternoon.

RCMP report the suspects allegedly took about $32,000 worth of property and money.

The shop’s owner Bryan Raiser announced the robbery on social media shortly after the incident, which occurred at about 3:30 p.m.

"I have to say I love you all and so thankful no one was hurt."

On Monday, Raiser told The Chief he was still shaken, but in good spirits.

“I think focusing on the positive is the way to go,” he said.

“Everyone is safe and [the suspects] will be caught and held accountable for their actions.”

Raiser did not reveal what was taken from the store.

He went on to remind fellow residents that if they ever hear something strange, they should report it to police immediately.

"Hug your loved ones," he said, acknowledging that he was pretty shaken up by the robbery.

A Squamish RCMP spokesperson confirmed that the suspects are still at large.

The suspects fled north on Second Avenue to Vancouver Street where there was a truck waiting for them, according to Cpl. Sascha Banks, of the Squamish RCMP.

The males are described as white, in their 20s and both wearing black hoodies.

Their vehicle is described as a newer silver Ford F-150 with some markings on the side of it.  It was last seen speeding in the area of Loggers Lane.

"For such a brazen robbery with firearms in the middle of the daytime on a Friday has been very scary for the community of Squamish and those who were working in and around the dispensary," Banks said in a news release. "We are very lucky no one was hurt and it is essential we get criminals like this off the street.”

Raiser said in his post that the Squamish RCMP officers were fantastic in their handling of the incident.

The dispensary opened as usual on Saturday, but Raiser said changes have been put in place to ensure they won't be robbed again.

"Immediate and dramatic changes have been implemented and there is no opportunity for this to happen ever again, which is great," he said, though he didn't elaborate on what changes.

Dozens of people took to social media in the days after the robbery to send support to Raiser and the business, which he acknowledged was the silver lining to the otherwise negative event.

"I can not stress enough how awesome Squamish is," he said in a post on Facebook Saturday. "Some say the horrible thing that happened yesterday is a new Squamish thing - absolutely amazing things and horrific things have been happening in Squamish forever - if anything the outpouring of love and support shows Squamish is still an amazing community that we dearly love."

*Please note, this story has been updated since it was first posted to include confirmation from the Squamish RCMP and additional comments from Raiser.