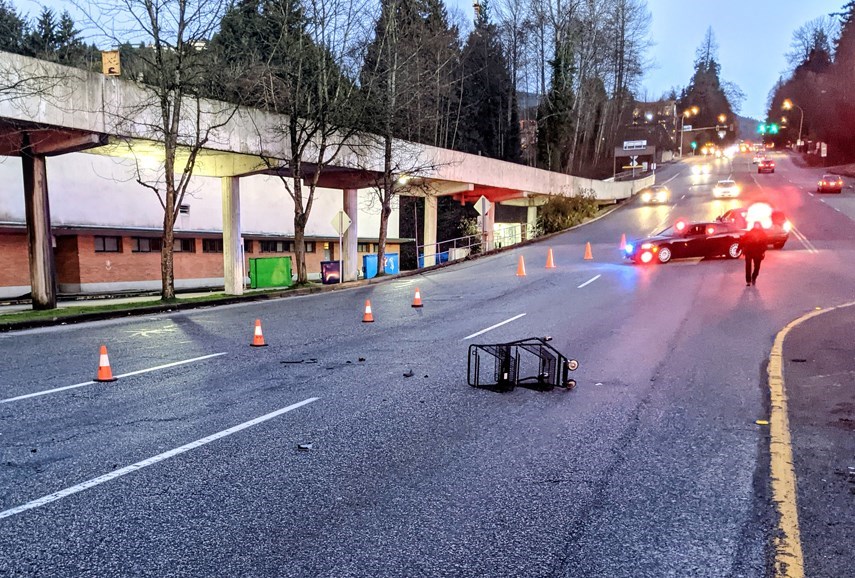 Investigators attend the scene of a hit-and-run that sent a 58-year-old man to hospital.West Vancouver Police Department

West Vancouver police say the suspect driver in a hit-and-run on a pedestrian has come forward.

On Monday morning (Jan. 18), around 7 a.m., the driver of a white Tesla Model X struck a 58-year-old man as he was pushing a shopping cart across Taylor Way near Clyde Avenuue.

The victim was taken to hospital to be treated for non-life-threatening injuries but the driver was seen fleeing in the direction of the Lions Gate Bridge.

West Vancouver Const. Kevin Goodmurphy said at the time that police believed the suspect would have known they had hit someone and the Tesla would likely have damage to the driver’s-side headlight/front wheel area.

Investigators put out a call for witnesses or anyone with dashcam footage from the area around that time to contact police.

Later in the evening, the driver came forward.

“The driver contacted us last night after seeing the media coverage,” said Goodmurphy in an email Tuesday morning. “He has been identified as a 91-year-old man from West Vancouver. He has provided a statement and investigators are determining next steps.”

Goodmurphy said police would not be releasing any further information on the file.

*This story has been updated since it was first posted, to reflect that a person came forward.