What was that banner over the Sea to Sky Highway all about?

Squamish residents drop banner in support of a guaranteed livable income.
May 4, 2021 12:29 PM By: Jennifer Thuncher 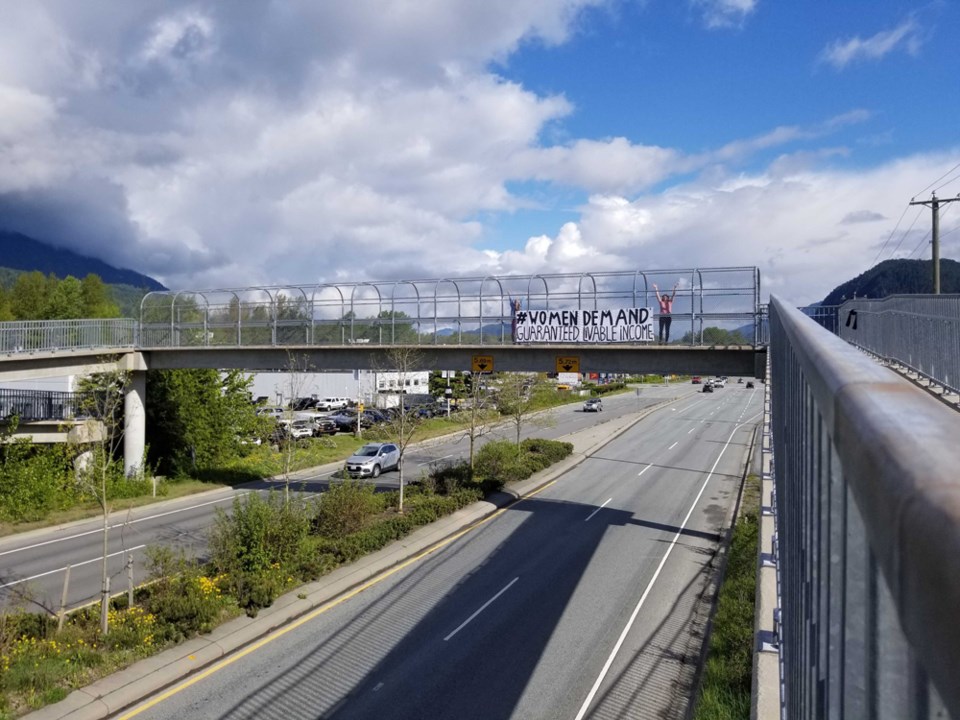 The black and white "#Women Demand Guaranteed Liveable Income," banner was put up by Squamish's Annika Brickwood and Megan Moffatt on May 1, International Workers' Day. Courtesy Megan Moffatt
Did you see the banner over Highway 99 near Garibaldi Village, Squamish?

The black and white "#Women Demand Guaranteed Liveable Income," banner was put up by Squamish's Annika Brickwood and Megan Moffatt on May 1, International Workers' Day.

It has since been removed, though not by the women.

The initiative was part of a provincewide action led by the BC Women's Alliance. Banners were also put up in other communities at the same time, including in Vancouver, Kelowna, Victoria, and Nanaimo.

BC Women's Alliance is calling on the government to distribute a basic income for residents of Canada regardless of citizenship or status, without a means test and without a job search requirement. The income would be distributed to individuals rather than families to ensure women are not being trapped in abusive relationships due to a lack of money.

Moffatt told The Chief GLI is something that she has believed strongly in since starting to volunteer with a women's shelter.

"From that work, I have seen how women in our communities are so often trapped in situations of abuse due to financial strains," she said. "Financial barriers that women face often make it difficult to leave violent situations with men."

She added that during COVID-19, women have borne the large brunt of the job losses and are often the ones who work on the front lines of the pandemic.

While the focus of this action in Squamish was GLI for women, the call is for all people to have access to the income.

"It is not just for women, but women have the most to gain from it," said Moffatt.

At its recent convention, the Liberal Party endorsed a resolution calling on the federal government to develop and implement a universal basic income, a term that is sometimes used interchangeably with GLI.

"As the federal and provincial governments plan for economic recovery from the COVID-19 pandemic, we insist on women's entitlement to better than a 'return to normal' since for many, the 'old normal' was based on economic and other inequalities of women, Indigenous people, and people of colour. Women require monumental, urgent change, including here in B.C. We have a chance to build a just future for women and for all, starting with a Guaranteed Livable Income," said Jacqueline Gullion, an organizer with BC Women's Alliance in a news release about the banner drops.

Asked how the government is expected to pay for this initiative, Moffatt said that wealth inequality is pervasive in Canada and needs to be addressed.

"I think we need to look at how wealth is distributed across race, sex and class lines and I don't think there is an absence of wealth in Canada. It is just how we distribute it," she said.

Given the global shakeup the pandemic has caused, the time is right for economic restructuring, she added.

"We are undergoing a restructuring of the economy, so when we are doing that, this is a really important time to address the economic inequalities that exist in our country and figure out, going forward, as we restructure, how we can lift people up out of poverty and have a more equal distribution of wealth."

Moffatt noted that the Canada Emergency Response Benefit (CERB) payments of $500 a week that the federal government thought fair to help people survive the pandemic, is more than some folks get from welfare in Canada.

"It is a bit contradictory for the government to offer that up to certain people, yet the people in our welfare system aren't entitled to that."

Moffatt calls on fellow Squamish residents to educate themselves on the GLI and lobby MLA Jordan Sturdy and MP Patrick Weiler for it.