Basketball star ‘just trying to give back’ with his sport 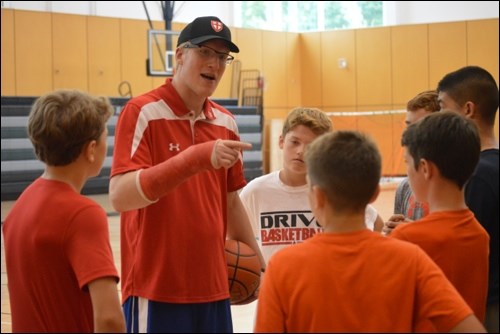 It was a homecoming, of sorts, for 2013 Quest University graduate Brodan Thiel.

Once known as one of the more menacing forwards in the Pacwest, Thiel now coaches Grade 8s at St. George’s private school in Vancouver, and he took 45 of his students back to his old stomping grounds this weekend.

From Thursday to Sunday, Thiel ran a summer basketball camp for any student from St. George’s who was interested. He said the connection with Quest is still strong, and he wanted to give his students an idea of what university sports could be like. “This is home to me,” he said, admiring the court. “I’m just trying to give back. I wanted to show them all where I came from and give them an idea of what life is like at a university and how they train.”

Students from Grades 7 to 12 attended the camp and hit the ground running. Drills, games and other activities were planned from 8 a.m. to 10 p.m. every day. Thiel, who also teaches physical education at another school in Vancouver, is the basketball coordinator for St. George’s and said it was easy to deal with his former coach, Quest athletic director Sean Shook. “I think we’re building a nice relationship with Quest,” he said.

Thiel said coaching has been a blast and he enjoys staying involved in the game he loves. “It’s shaping my life, and everything I do now is giving back,” he said. “Someone at some point on my life gave to me… I got the opportunity to do so much in basketball. Now it’s my turn to give back. It’s very fulfilling.”

The camp included both the St. George’s Grade 10 and Grade 12 coaches and current Quest Kermode player Denzel Laguerta. Thiel and Laguerta formed a bond while at Quest and were also on the coaching staff for the U14 boys provincial basketball team last year. “We’re very close friends and he’s trying to get into teaching like me, so I’m just helping him along too,” he said. “I had a lot of help on my way up and I’d like to pass that on to him.”

Thiel hopes to continue to build the bond between St. George’s and Quest when he returns to teaching this fall.