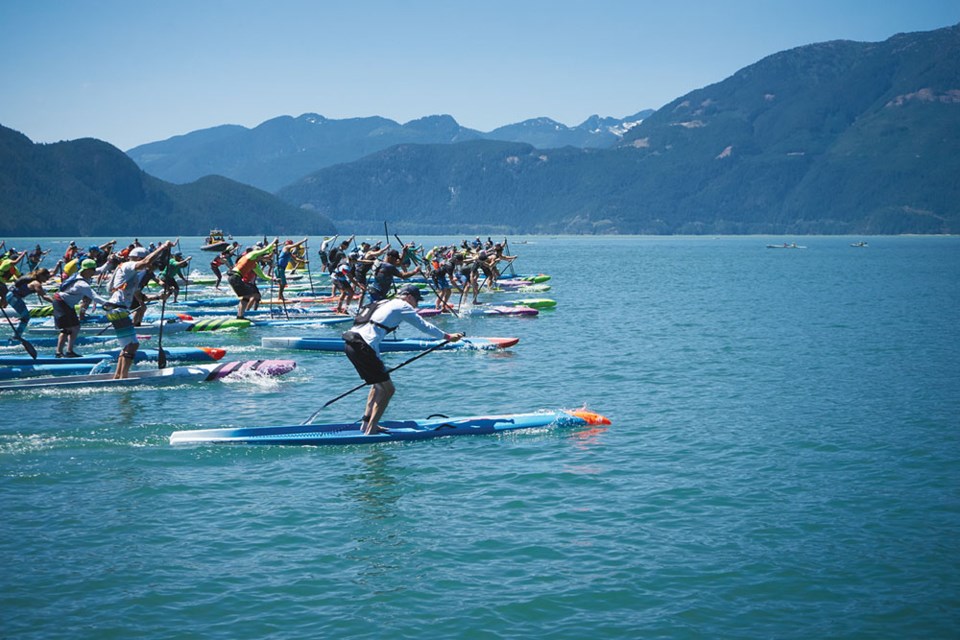 Downwind Championships are set to make a splash on July 13 from Porteau Cove to Squamish.Viviane Nishikiori

Paddle at the ready, Squamish. The sixth annual Canadian Downwind Championship race is blowing back into town on July 13, where stand up paddleboards (SUP) and surfskis ride the waves at up to 17 kilometres an hour.

Racers will get in the water at Porteau Cove and set off for the Mamquam Blind Channel, with the wind at their backs.

Bob Putnam, co-owner of Coast Outdoors in North Vancouver and co-race director, said the big prize purse draws around 200 local and international racers to the water. Last year, 11 nations were represented in the competition. The first man and woman to reach the buoy at the 1.5-kilometre mark win $1,500 each — up from last year’s $750 because of a private donation. In total, Putnam estimates there’s $17,000 in cash prizes for the elite racers.

Those with a sharp eye should watch for local SUP paddler Norm Hann and Deep Cove’s Mike Darbyshire (the current national champion who will compete at the PanAm Games). Lincoln Dews, who is currently ranked as the world’s top male SUP paddler, is also expected to make a splash.

As for the surfski world, Kelowna’s Greg Redman is the current Canadian downwind champ and will be one to spot. The five-time defending champion of the race — who won the Squamish championships for all but one year — is Sean Rice. Of course, Olympians will be among the frothy fray. New Zealand’s Teneale Hatton and Rachel Clarke are known for their speed. Another paddler to watch, hailing from Kelowna, is Sally Wallick — “she’s going to beat a lot of the guys in surfski,” Putnam said.

“I think, generally, it’s put downwind paddling on the map for Squamish and for people visiting the area,” Lowe said. “We run into people from Hawaii out there. I think it has created a little bit of a destination spot that they know there’s reliable winds and great downwind paddling,” Lowe said.

Around 3:30 p.m., paddlers will be landing across from Pavilion Park. That’s where Lowe recommends spectators catch the picture-perfect finish.

“It’s a pretty cool spectacle to see 200 of these boats coming off the water basically at the same time,” Lowe said.

Want to do more than watch, but not quite ready to compete? Some of the racers offer clinics to teach the sport.

“It’s a great opportunity for people who are interested in improving their skills, to get coaching or tutelage from the best racers in the world,” Putnam said.