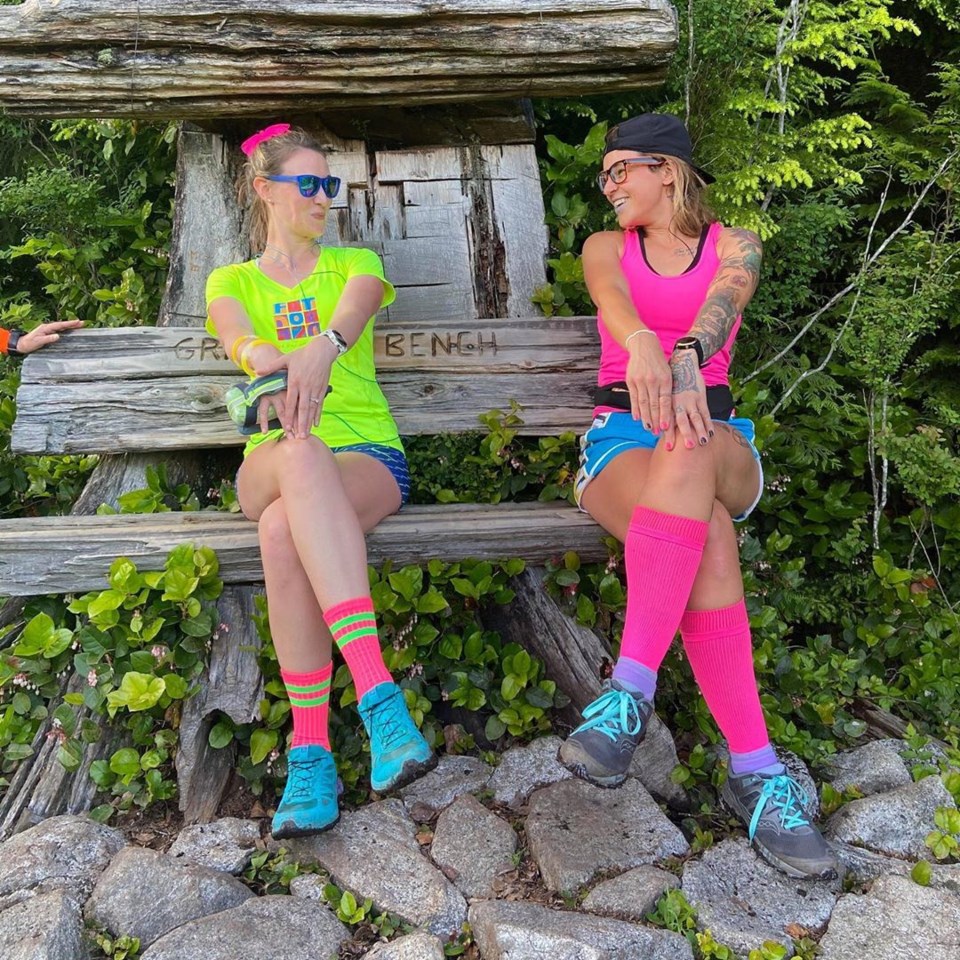 Participants in the virtual scavenger hunt get creative.Lindsay Burak

The Salomon Coast Mountain Trail Running (CMTR) Series may, aside from perhaps one race, be off this year, but it's still looking to push runners — in ways they might not expect.

CMTR is holding the Summer Scavenger Hunt, which started on June 8 and runs until Sept. 16, where participants can earn 30 different badges based on the different types of runs they complete.

Series co-director Geoff Langford explained that challenges range from running in the worst weather conditions to picking up the weirdest piece of trash.

"A woman the other day found a tire that she carried back on her run," he chuckled.

Other challenges are designed to bring joy to the greater community, such as the Light Bright run, which encourages participants to wear their most colourful outfits, or some, which Langford dubbed "the introvert's worst nightmares," where athletes provide encouragement to everyone they come across.

"We're hearing from a lot of people how it's freshening up the way they run. It's giving them a different perspective on things and encouraging them to do things they had never thought of or normally wouldn't [do]," he said. "It's rewarding to see that happening."

Some of the challenges encourage runners to try a new trail or route, though Langford stressed that they should do so relatively close to home and avoid travelling to a new community.

"Obviously, we don't want to have that impact on the community or strain on search and rescue or health care services. We wanted to come up with something that was very different, very unique, and was open and accessible to everybody anywhere," he said.

Langford said the response has been encouraging, with more than 1,900 participants having registered. A typical season across the series' eight events sees roughly 6,000 entries, though many participants complete multiple contests.

Like many virtual events on offer, the scavenger hunt is open to all regardless of geographical location.

While there have been plenty of familiar names taking part, Langford said, there has been uptake from across the world, including Australia, Germany, Sweden, Japan, France, Ireland and the Netherlands.

Langford added that the demographics shifted fairly significantly, with women making up roughly 70% of the participants.

"Most ultra runs are pretty heavily male-dominated," Langford said, noting the Squamish 50 comes the closest to parity with a 55-45 split.

The scavenger hunt costs $75 to register, with $10 from each sign-up going to local trail-maintenance groups. Langford said the initiative has raised roughly $30,000 for those organizations as registrants have donated additional money to the cause.

The series cancelled most of its events for the summer as the pandemic wore on, though it has held out hope for the Whistler Alpine Meadows race in late September. Langford said the series has been in close contact with the Resort Municipality of Whistler (RMOW) and Whistler Blackcomb, saying he expects to make a decision one way or the other by July 1.

"We're looking at that every week in terms of the B.C. guidelines and parameters, and what we could do that would make sense for everybody, for participants, for the community, for the greater good," he said. "At the moment, if it goes ahead, we'd be looking at a very scaled-down version."

One option is to limit registration to B.C. only, though including Alberta is a possibility depending on the situation when the decision is made.

Even if it's allowed within provincial guidelines to host the race, Langford said, there's still the chance the series may opt against it.

"Just because we can doesn't necessarily mean we should, and that's where the real discussions are," he said.

Scavenger hunt registration is open until Aug. 10. For more information or to sign up, go here.