Hundreds of young players took to the fields at Brennan Park Saturday morning for the latest jamboree to wind down the soccer season.

The Squamish Youth Soccer Association (SYSA) event was organized by BC Soccer, which holds similar jamborees throughout the province, but Andrew Haines of BC Soccer says there’s usually “nothing this big.”

“Normally, it’s on one or two fields, side by side,” he said.

Haines opened the festivities, getting the youngsters pumped to play while simultaneously getting parents to make sure their children had their water bottles nearby for a hot, sunny Saturday.

Approximately 350 players, most from the U6, U8 and U10 levels, spent an hour playing five-on-five matches on mini-pitches, rotating to different fields each time the horn sounded to signal a field change.

The emphasis for the children was on fun rather than results, especially because the youngest kids were still finding their legs on the soccer pitch. At one field, an adult wondered aloud at his child’s inexplicable kick toward the sideline. At another, a parent laughed at a goal, saying, “Good goal, buddy, wrong net.” The tone was gentle.

When play wrapped up an hour later, the organizers had the teams gather for a group shot near the BC Soccer banners.

Even though the idea was to have fun, the jamboree’s short games also helped get young players used to handling the ball.

“The overall philosophy of what we’re trying to do is get every kid to touch the ball more,” said Ray Christensen, SYSA vice-president. “You can look at any station – there’s kids running.”

In this way, the young players get involved in the game and build their skills more than if they were simply standing still on a big field waiting for the ball to come to them.

At the end of the fields, some of the older teams at the jamboree took part in longer matches with more players.

“They’re at an age when they want to play a game,” Christensen said.

This year marked the third time the association has worked with BC Soccer for the jamboree format, and Christensen said they have fine-tuned the event each time.

“The first year was super-organized chaos,” he recalled.

Also this weekend, the SYSA also gave out awards to end the season by presenting players with medals and prizes at a ceremony in the Brennan Park gymnasium following the jamboree.

As part of the festivities, the association gave out several special awards:

• The U8 Purple Zombies won the most sportsmanlike team.

• The Yellow Jackets won the most improved team (U12) award.

• Ray Christensen and Jose Oreamuno won for most outstanding contributions for the betterment of soccer.

For more information on the Squamish Youth Soccer Association one can visit www.squamishsoccer.ca. 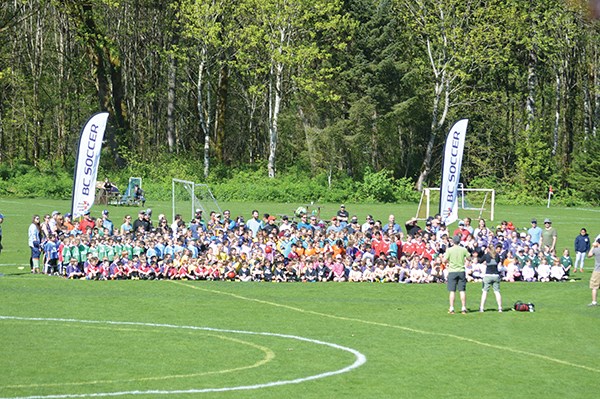