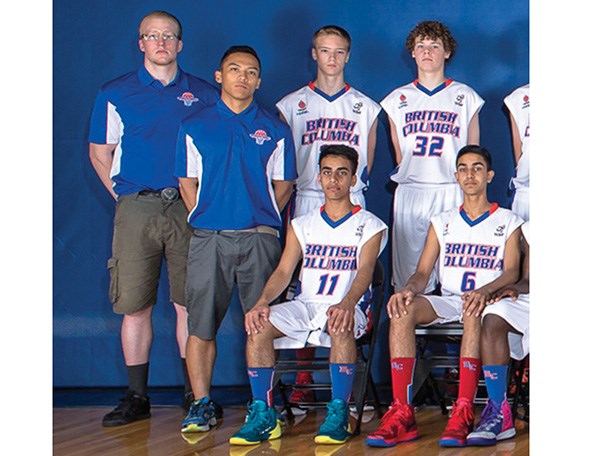 (right) Brodan Thiel and Denzel Laguerta are passing along some of the basketball knowledge they learned at Quest University to the U14 Boys BC provincial team this summer.

Years of battling in the paint have turned into a wealth of knowledge about basketball for former Quest Kermodes forward Brodan Thiel.

Now he’s passing on some of that knowledge to a whole new generation of British Columbia ballplayers.

Since graduating in 2013, Thiel has remained active in the sport as a coach, and this past summer was named one of the coaches for the U14 Boys Provincial team.

“Last summer I coached the U15 regional team in East Van, and later that summer Shook was coaching the U17 team and I asked if they needed an extra hand,” he said. “I got involved with them last year and this year was asked to coach the U14s and I jumped at the opportunity.”

After graduating from Quest, Thiel completed a teaching degree at SFU and helped coach the Grade 9 Boys team at St. George’s in Vancouver. He made such a positive impact at that school that he’s been hired on to teach there full-time in the fall.

“Basketball is leading me into avenues I never even thought possible,” he said.

Thiel said it’s rewarding to be a positive influence in the lives of young basketball players.

“It’s about being a role model and giving back,” he said. “When I was a kid I didn’t really have many male role models, and now with these kids, you drive them to games, to Tim Hortons and buy them lunches and it’s all good, because you’re giving them an opportunity to play the game they love.”

He said his years at Quest playing under Shook increased the desire to stay in the game and experience the game from the sidelines.

“When Shook gave me the coaches’ award in my last year, he said I was the toughest guy he’s ever had to coach because we’re so similar,” he said. “We would butt heads all the time at practice, but I knew that from the time I started playing college ball that I would eventually be a coach. Shook mentored me and we’re great friends now and talk all the time. He helped bring me along and I’m forever grateful for the opportunities he’s given me.”

The Quest flavour on the U14 team is strong this summer as Thiel helped to bring along current Kermode Denzel Laguerta to assist with the coaching duties.

“We played one year together and Denz is a great teammate and is very familiar with the Basketball B.C. program,” he said. “He knows the program and he’s a smaller guy so he’s relatable to the kids. He’s got a great personality and is an awesome guy, so I thought he’d be a great fit and he has been.”

The U14 team has travelled throughout Washington State so far this summer and just finished a tournament in Las Vegas last weekend. The Las Vegas trip marked the end for the team and the boys got to battle teams from Chicago, LA, Seattle and Nebraska.

“We are pleased with how the summer has gone. Everyone has gotten better and that is the goal of a development team,” he said.