Though injury rates are relatively low, Enduro World Series study has recommendations to drop them further
Nov 8, 2019 7:42 AM By: Dan Falloon 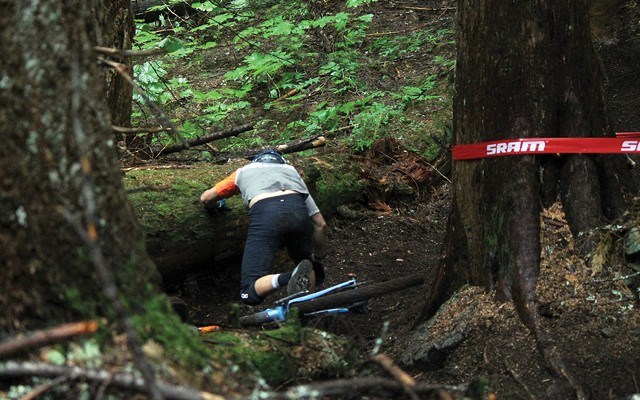 Sweden's Robin Wallner gets up after a crash during the CamelBak Canadian Open Enduro in August. The Enduro World Series recently undertook a study looking at injuries in the sport, and what could be done to make it safer.Dan Falloon

A study commissioned by the Enduro World Series (EWS) earlier this summer found that enduro has fewer injuries than comparable mountain bike sports such as cross-country.

EWS riders lost, on average, 12.3 days per injury (including those that did not cause an athlete to miss time), compared to 33 days in English professional rugby union (though only injuries that sidelined an athlete were counted).

Other findings include that while female riders were more likely to suffer an injury, male riders' injuries were generally of greater severity, shoulder and clavicle injuries were the most common, and those, along with hand fractures, required the longest recovery time. In terms of head injuries, there was only one concussion per 263 rider races in Part 1 of the study.

The study recommended that riders wear more protective equipment to guard against lacerations and abrasions and learn first aid skills, that race organizers should place more medical staff near steep dirt and rocky sections and should reconsider qualification standards for new riders, and that the mountain bike industry investigates creating new shoulder protection gear. It also called for greater concussion detection awareness on the part of both athletes and race personnel.

Dr. Debbie Palmer, the study's lead researcher through Edinburgh Napier University, said many of these fixes are fairly simple.

"Some quite quick and easy changes could be made to impact and decrease some of those injury risks," she said.

Palmer has more than a dozen years of experience working in injury and illness surveillance and protection across a spectrum of sports. Her prior work has been with organizations such as Scottish Rugby, UK Sport, and the International Olympic Committee's medical and scientific research group.

"There are a lot of organizations that are looking at doing this work. I think with the EWS, because they are still quite a young organization, it was very forward thinking," she said. "A lot of these governing bodies, national and international governing bodies, they've been established for quite a few years.

"Increasingly, more of them are doing this type of work, which is great when you think about the importance of protecting athlete health when they're competing in these major sporting events."

EWS communications manager Kate Ball said the organization was proud to take the lead on such research in the mountain biking world.

"There's never been a large-scale study in mountain biking before," she said, noting EWS founder Chris Ball had hoped to initiate a similar study while working for the UCI that never materialized. "Enduro is a rapidly growing discipline, and we just felt that it was our responsibility, that if we were going to be designing courses and as more and more smaller enduro series in the world were starting to adopt our format and our rules, it just made sense.

"If we're leading the charge on course development, we wanted to make sure that we're doing it in the safest possible way."

Ball said the EWS is looking at tangible changes it can make as it prioritizes athlete safety in the future.

"It will for sure inform our course design. If you look at where injuries happen, they're most likely to be on high-speed sections, not technical sections," she said.

While traditional sports had a pervasive culture of playing through getting one's bell rung, Ball described a more supportive environment in enduro, noting teams such as Trek Factory Racing have brought in concussion specialists.

"I don't think there's an engrained culture of just getting on with it. We're a new sport and we're adapting to the times quite quickly," she said.

With the better part of a season to digest the findings, Squamish enduro rider and 2017 UCI downhill world champion Miranda Miller found that in her experience, riders didn't make any changes after the study was released, nor did she feel any of the information garnered would have prevented any of her prior ailments, and has long felt well informed of the sport's risks.

That said, Miller said via email that she appreciates that the EWS commissioned the study.

"I think it shows that the EWS cares a lot about safety and are trying to provide as much support and information to help prevent, but probably more so deal with injuries and recovery," she wrote. "Mountain bike racing is a dangerous sport, so if you minimize the risks that you can control, it will help."

Miller added that she only ever felt unsafe in action on one occasion, during a contest in Madeira, Portugal roughly three years ago. On a remote stage with "insane exposure," her teammate Curtis Keene suffered a broken collarbone during practice and the isolated nature of the stage made it difficult to extract him despite the injury's fairly common nature.

"I've noticed the races are becoming more and more 'centralized' and less remote allowing easy access in and out of the trails. I personally like this for many reasons including safety," she noted.

Miller wrapped by explaining each injury she's suffered has affected her riding in one way or another. Her current prevention mindset is to calculate risk versus reward.

The study is available online at admin.enduroworldseries.com/uploads/documents/EWS%20Medical%20Study%20v6.pdf.

Palmer added that a more detailed academic study will be released in the next six to nine months. She would also like to see follow-up research to determine what effects preventative efforts are having.