Opinion: What it’s like learning how to develop a sport climbing route

Learning how to make a new climb, from the scrub to the bolts, to the first ascent.
Steven Chua May 4, 2021 5:38 PM
Previous Next
1 / 1 Kushwant Bussawah ascending the ropes on a newly developed route. Photo - Steven ChuaSteven Chua
Expand
Previous Next

“Now you know what goes into making these things. It’s a lot of work.”

It was one of many quips I’d heard from longtime climber Eric Chan — who goes by the name Eric Tran — after I finished yet another long session of scrubbing dirt, mud and moss from a hunk of rock towering up about 20 metres high.

Tran, a longtime local climber, offered to take me along on a weeks-long session of developing several new climbing routes in Conroy’s Castle, in the Chek Canyon climbing area.

Mud, dirt, moss and loose rock build up over crags, and it’s the route developer’s job to — within reason — clean the area to the point that it’s safe enough to ascend.

This is often a long, long painstaking job that requires you to fix anchors to the top of a crag, rappel and ascend fixed lines, and, with brush in hand, polish the rock until it’s climbable. 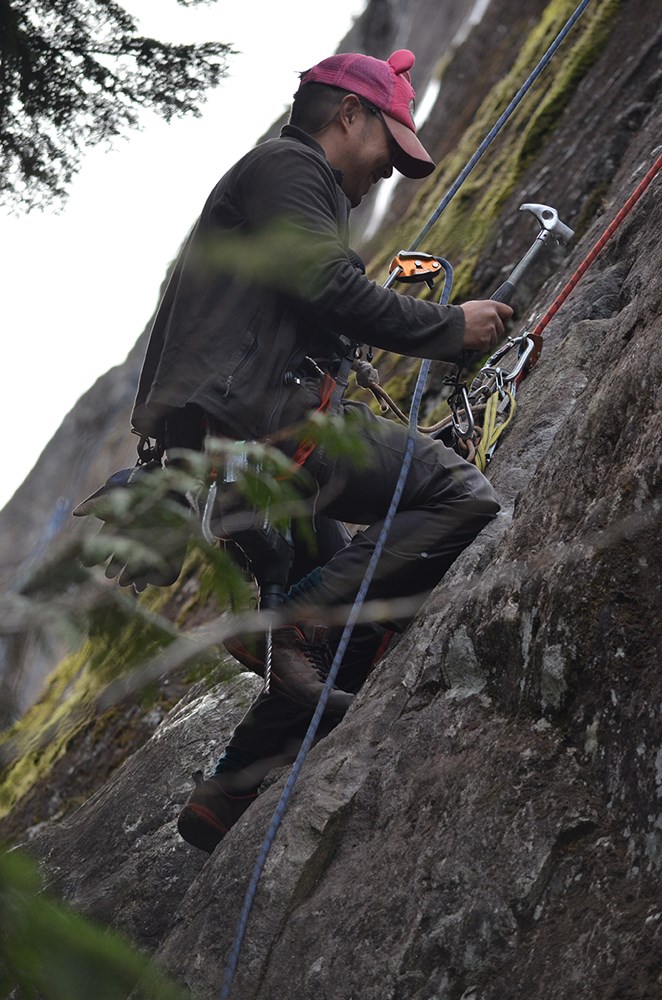 Eric Tran working on route with a piton hammer.  By Steven Chua

Tran picked out a line for me, right next to another line being developed by a buddy of mine, Kushwant Bussawah.

It would be hard work, but at least there was the prospect of bringing much joy to other recreationalists.

“Now, the nice thing about developing here is it’s going to get a lot of traffic,” Tran said.

Indeed, the first of the routes had that implication to its name.

During the first week or so of developing, Tran had already finished cleaning and bolting a new multi-pitch route that he dubbed Asian’s Gumby Superhighway, a light 5.6 or 5.7 climb that he assured me would be completely full on busy days.

On the evening of the first ascent, I tagged along as a fellow climber and witness and watched Tran and Bussawah inspect the holds and decide where to place the bolts. 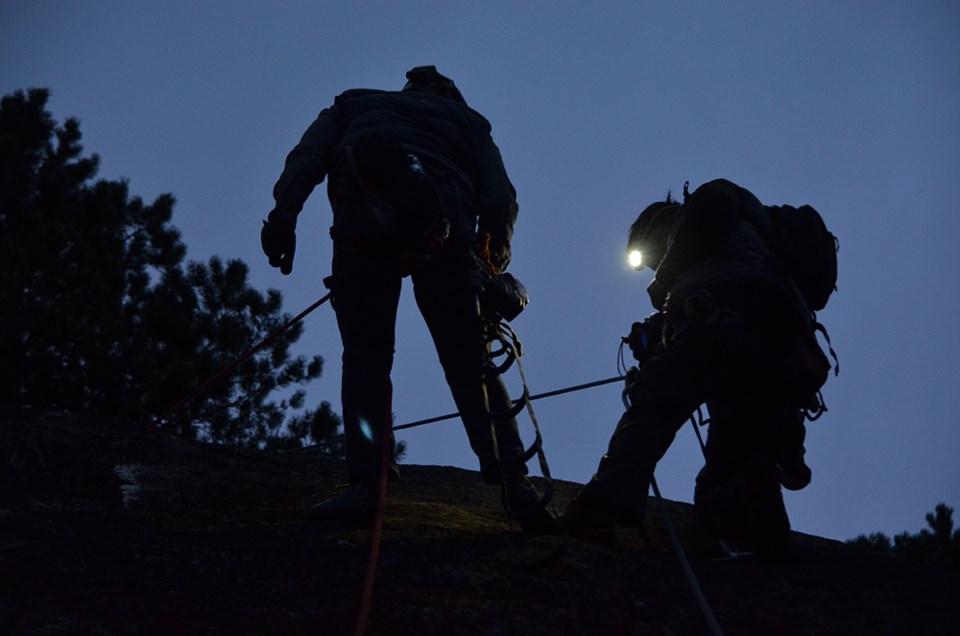 Sport climbing, unlike trad, takes place on rock where there are few or no cracks to place protective gear.

As a result, bolts have to be put in place at certain spots so lead climbers can clip in and protect themselves.

Finding the right place to put a bolt is not as straightforward as getting a drill and pressing the trigger.

During one session, Tran told me to come on over and have a look at what he was doing.

“You have to check the quality of the rock. You hit it here” — he said while placing his hand on the rock and swinging a piton hammer four inches around it — “and listen to it and see if you can feel it.”

A hollow, ringing sound is an indication of poor rock quality. Rock that reverberates heavily when the hammer hits it nearby is also another big red flag.

Back at night of the Gumby Superhighway’s first ascent, I watched Tran and Bussawah repeat the process a number of times until the route was bolted.

They eventually did the first ascent, and would later allow me to give it a try on lead as well. It would be my first taste as a part of a First Ascent team

Tran decided to give it its name because he felt it would be a very popular route for new climbers. Gumbies are what people jokingly call weaker or newer climbers.

As for “Asians,” Tran also noted that people of colour were very, very few and far between in route development circles.

“I think you’re the only one,” he told Bussawah one day when trying to think of other South Asian scrubbers in Squamish.

At some level, we all figured we’d incorporate that perspective into our route names. 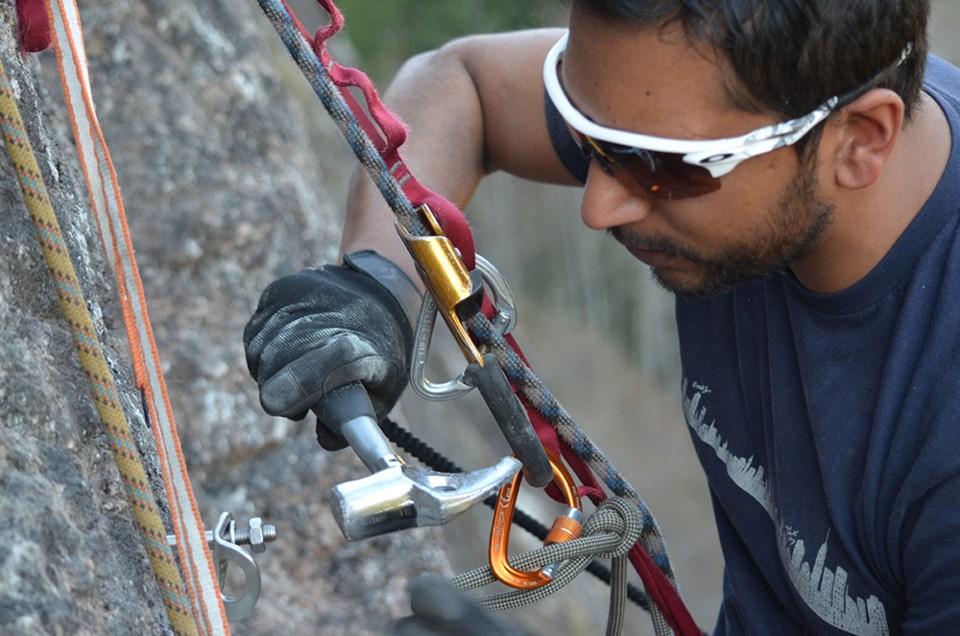 Kushwant Bussawah driving in a bolt on his new route, Brown and Veiny. By Steven Chua

The process would repeat itself a few days later at Bussawah’s route.

After he sent the route, Bussawah decided to call it Brown and Veiny — brown being a self-explanatory reference, and veiny describing the lines the rock formed at the upper part of the route.

When my route was sufficiently clean, it was time for me to have a go with the drill and hammer.

But first came the supplies. For every clip-in along the route, a bolt and a hanger are needed. Plus, rappel rings or chains are needed at the end to provide something to lower off of.

Altogether, it costs on average over $100 for one route. Not only does route development cost you time, but it also costs you money.

Nevertheless, I was in too deep to back out now. I went to the store and paid the money.

I’d then spend an afternoon under Tran’s guidance testing the rock, drilling and setting the bolts, hangers and rappel rings. 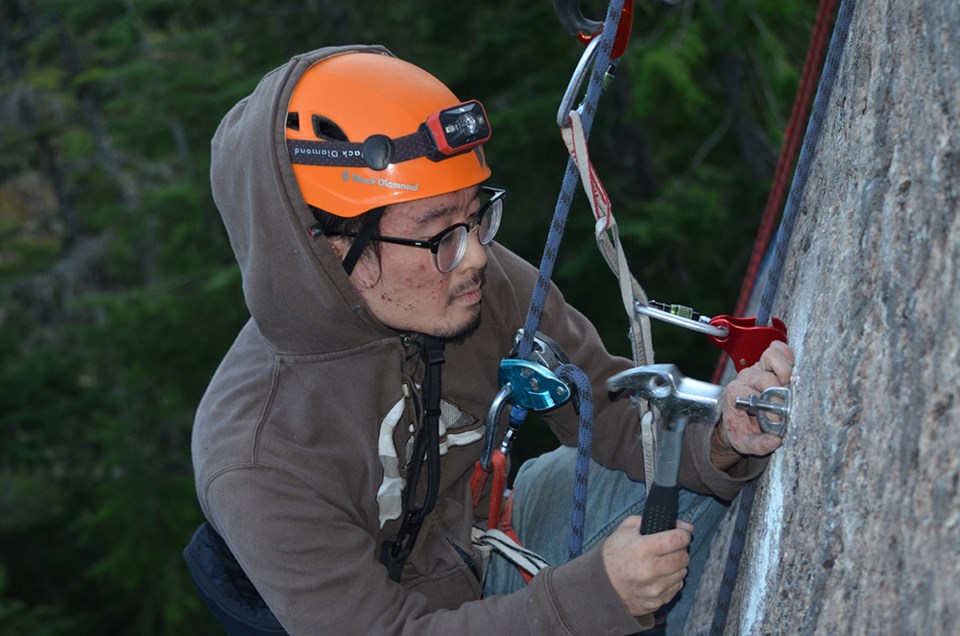 Steven Chua drilling in a new slot for a bolt and hanger on the route The Great Yellow Hope. By Kushwant Bussawah

When all was done, we put on our gear and did the first ascent.

Having done the route, it was time to do two things the first ascender gets to do — call the grade and name the climb.

It was a mostly easy climb, but the top was trickier, and, generally, you’re expected to grade the route at the hardest move — even if it’s only one or two moves.

I graded it at 5.9, which is an upper beginner or lower novice grade.

As for the name, it’s customary in climbing to give routes irreverent, quirky names, though that has become an increasingly fraught activity in the last few years.

More people are recognizing that first ascensionists have typically been a not-so-diverse demographic and this has been reflected with names and humour that is becoming increasingly scrutinized.

So on one hand, you have the desire to preserve the irreverent humour of climbing, but without alienating its more diverse demographics.

Eventually, I settled on calling my route The Great Yellow Hope.

It’s an ironic play on Jim Jeffries’ title as The Great White Hope, a man who was sought after by boxing promoters to prove the white man’s fighting superiority over others — specifically, Black boxer Jack Johnson.

Jeffries would get his ass kicked.

So I thought my play on the words was a funny title, and I feel like it’s a phrase that’s saying new things are happening in the future. Hopeful things.

But like a good route scrub, it’s going to take a lot of work. 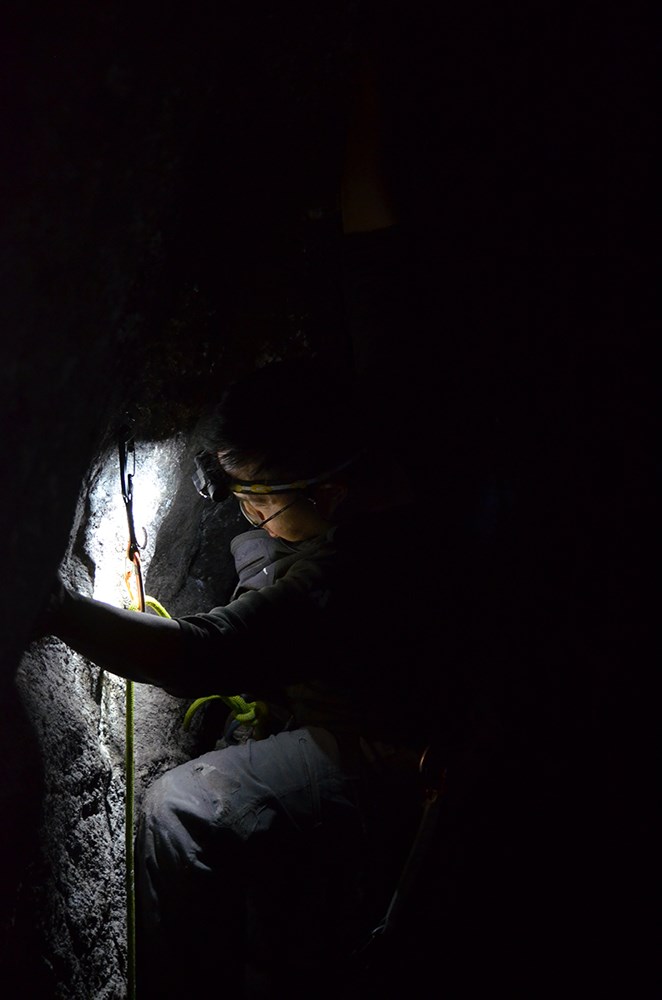 Eric Tran climbing on the night of the first ascent of The Great Yellow Hope. By Steven Chua
***Updated May 5 to clarify Eric Tran's legal name — Eric Chan.

Squamish's Beyond the Valleycliffe of the Dolls returns on Saturday
Aug 11, 2022 4:55 PM