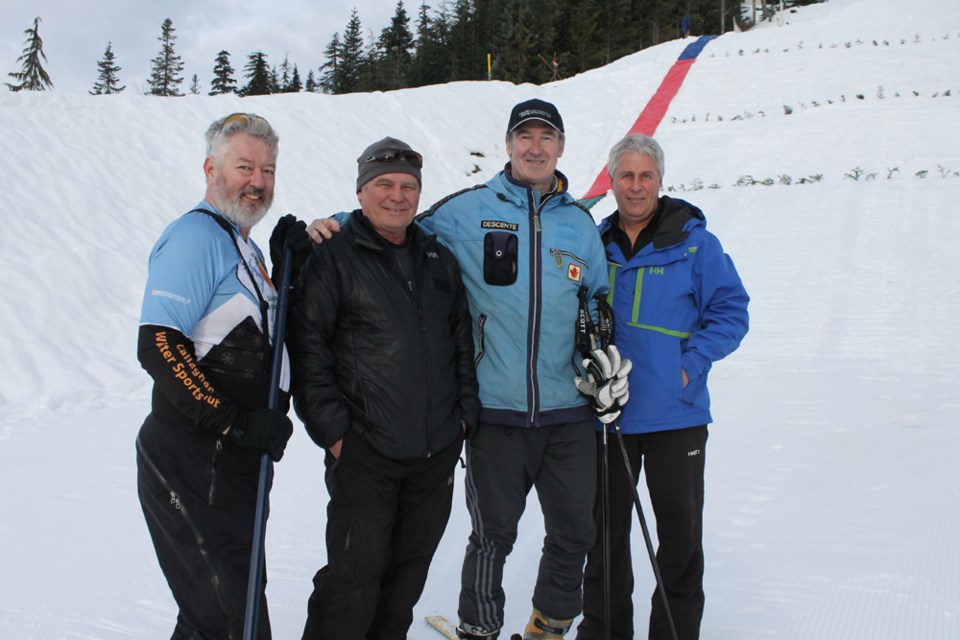 John Heilig (right) was an advocate for ski jumping and Nordic combined in Canada and across the world. He passed away last week in China while helping to prepare the venue for the 2022 Winter Games. Heilig is shown here at Whistler Olympic Park with Jim Woolsey, Andreas Andresen and Tom Thompson in 2015. File photo by Dan Falloon
One of the first things that Vancouver Organizing Committee for the 2010 Olympic and Paralympic Winter Games (VANOC) CEO John Furlong remembers about John Heilig is his sense of humour.

And Heilig, the 2010 Games’ ski jumping and Nordic combined sport manager who died of a suspected heart attack in China last week while helping to prepare that country’s venue for the 2022 Games, wasn’t shy to unleash his wit in any occasion.

In Furlong’s case, the target was ironically enough — his general aversion to winter during a Whistler Olympic Park visit (WOP).

“I’m not exactly the most winter-friendly person. I don’t like being cold and I’m not the biggest fan of the snow,” Furlong told Pique. “I was up there and I was wearing these soft shoes and my feet were freezing and wet.

“I was sitting with some people from the IOC and he came over and he said to me, ‘It is the Winter Games, you do know that, right?’”

Unlike Furlong, the fun-loving Heilig embraced winter and in particular, advocated for ski jumping and Nordic combined for more than 40 years, first as a national team athlete and then as a coach based out of Calgary’s Canada Olympic Park.

After coming west to B.C. in 2006 to lead the 2010 ski jumping and Nordic combined efforts, he rose a step on the international stage, serving as a technical delegate in Sochi, Russia in 2014 and PyeongChang, South Korea in 2018 as well as at multiple FIS World Ski Championships.

“He basically was the champion for the sport from the beginning, shortly after we were awarded the Games, all the way ‘til the end,” Furlong said. “He had developed his credentials and his relationships and his reputation with the sport around the world to a degree that when Vancouver 2010 was over and those events were all executed beautifully, he went on to fill the same role in Sochi and PyeongChang.

“If Vancouver gets the Games again in 2030, he would be our first pick.”

Furlong acknowledged that Heilig was at times fighting an uphill battle in his passion a sport that is niche in the grand scheme of Canadian sport culture.

However, he admired Heilig’s ability to find and make the most of the opportunities he found.

“He was the guy with their megaphone,” Furlong said. “It’s pretty hard for a sport like ski jumping and Nordic combined to get any airtime, but whenever airtime was available, he found it.”

Tim Gayda, who was VANOC’s managing director of sport, got to know Heilig after he moved from Calgary. They’ve crossed paths again as they both worked on subsequent Games.

Gayda recalled Heilig’s incredible sense of serenity in the face of a stressful situation as WOP was getting to hold a pre-Olympics event.

“The snow wasn’t holding up and it wasn’t looking good for this event,” he said. “He just remained calm, jumped and grabbed the hose, sprayed things down.

“All of a sudden, the jump hill was perfect and no one knew there was a crisis. He was calm throughout the whole thing.”

For current WOP managing director Tim Hope, who also worked with Heilig throughout the Games, his strongest memory is the “monumental moment” of pulling off the Olympics and revelling in the accomplishment at the conclusion.

“I have a wonderful memory of him on the final day when jumping ended and we were all celebrating the success we had here,” he said. “Seeing him celebrate with the volunteers and how they rallied around him after he’d led them was really inspiring.

“He’s a special person on that front. You can’t really find a lot of people that really inspired folks to support the Olympic movement like he did.”

While Heilig was heavily involved in the sport at an elite, international level, he devoted just as much time and effort to growing it at its grassroots, most recently serving as Sea to Sky Nordics’ technical director, recalled club president, Squamish’s Rick Smith.

“It’s just amazing the touch John had on our local programs and on our local kids,” he said. “We’re dealing with a world-class guy.”

What stood out most to Smith is how freely Heilig would provide guidance, sharing his vast knowledge while doing so in a kind manner.

Smith added that while Heilig had a specific focus in his endeavours, he was happy to assist in other Nordic disciplines if called upon.

“He would just give of his time,” he said. “Here, on weekends and for our Wednesday night programs, he was just out there working with kids. When he saw coaches that were rookie coaches that weren’t quite sure about things, he would take those coaches aside and give them some coaching.

“It was always in a way that was never about him. He never lorded it over anybody.”

Heilig was also WOP’s manager of Nordic sport for nearly five years after the Games and played an essential role in establishing programming at the site to help it fulfil its capabilities as a legacy and help bring out the sport’s next generation. “For us, he’s certainly a driving force for jumping and Nordic combined, and was responsible for many of the current existing things that are in place at Whistler Olympic Park from the kids programs through to … the schools program that we have here,” Hope said.

While Heilig had the high-level skill and technical know-how, Smith said that he also had course maintenance down to a science, ranging from the type of rake to use in a given scenario to the correct timing to apply hardener to the hill before an event.

Upon finding out the news early on Feb. 22, Smith and the club sprung into action to assist Heilig’s widow Kelly and their five children.

“They’re such a lovely, lovely, loving family that it’s just so sad,” he said.

Smith said the Heilig family planned to come over from the Sunshine Coast to join Sea to Sky Nordics members for a candlelight vigil as part of the club’s March 3 training session at WOP.

A GoFundMe set up by Gayda to cover funeral costs and other expenses had hit $74,000, as of March 3.

Gayda had initially set the goal at $10,000, with donations blasting past that number in a matter of hours.

“It’s not only the amount of money raised, it’s the number of people who gave,” Gayda said. “It just speaks unbelievable volumes to his character.

“Obviously, he touched their lives in one way or another that they felt compelled to give.”He plans to leave the site live until the pace slows down.

Gayda also stressed that Heilig’s colleagues on the ground in China helping out in any way they are able, navigating difficult bureaucratic issues such as procuring a death certificate and legal transfers in a foreign country in the midst of a pandemic.

“Everyone has really banded together there to support this process, which is not easy to do [with] the paperwork in Chinese,” he said, stressing that the local authorities are also being cooperative.

“Trying to do that in the middle of COVID is exceedingly difficult.”

**Please note, this story has been corrected since it was first posted to say the family found out about John's passing on Feb. 22, not Jan. 22 as originally stated.