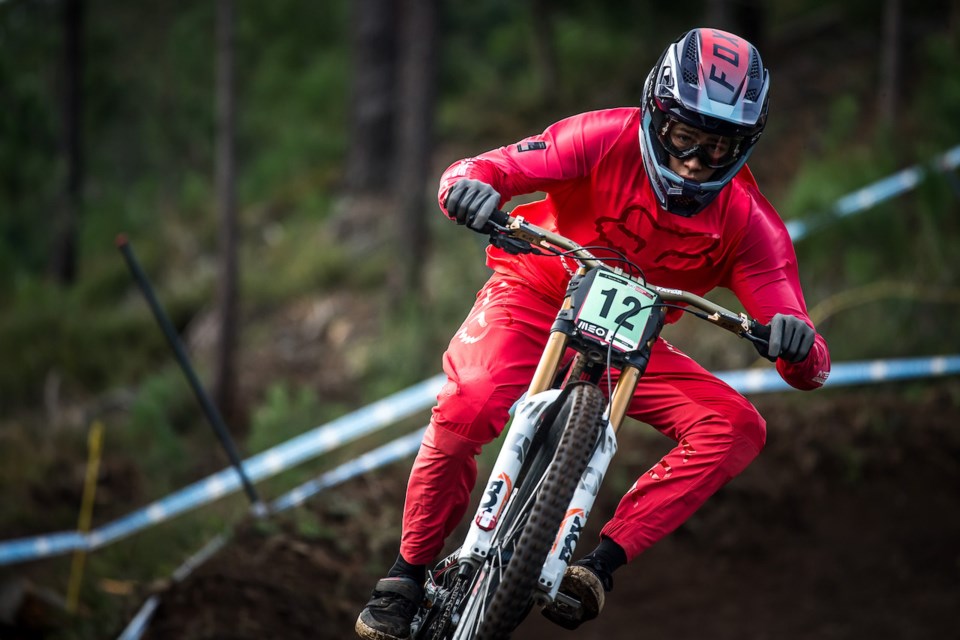 When Squamish's Seth Sherlock headed to Europe for the 2020 UCI Downhill World Cup season and World Championships, he wasn't sure how many races, if any, were going to be run.

With the uncertainty surrounding the campaign, the junior rider said it was a challenge to get ready for the worlds at Leogang, Austria (Oct. 7 to 10) and World Cup events at Maribor, Slovenia (Oct. 15 to 18) and Lousa, Portugal (Oct. 29 to Nov. 2).

"It was really good to be back racing. I got stoked on that, but it was quite difficult to prepare for. The whole offseason, you didn't know if it was happening or weren't really sure of what was going on," he said. "It was pretty touch and go. We were at Maribor and people were like, 'Lousa's going to get cancelled.'"

Despite the challenges with training, Sherlock approached the season as if it were on, even as case counts mounted and several race sites implemented restrictions shortly after riders left.

On course, Sherlock gained momentum as the autumn progressed. After a 22nd at worlds, Sherlock took 13th and 21st at the two Maribor contests before finishing with back-to-back top-10 results, eighth and seventh, at Lousa to finish 12th in the overall standings

"It was a weird overall [season], though. Three weeks, four races and two tracks," he said. "It's not like a normal overall championship, where it's won over the whole season, it has so many different races on so many different tracks.

"If one of the tracks was bad for you, you were pretty much done."

Despite some lower results at Slovenia, Sherlock was generally satisfied with his riding, namely his pace. In the second contest, especially, there were dry conditions and he liked the track, but it ended with a "fluke" crash.

"I was on pace for the podium. I was third in the split before I crashed and gaining speed as I went along," he said. "I was pretty bummed that I crashed there … I didn't make a big mistake, but my front tire just dug into the ground."

From there, he took a step back, looked to regain consistency, and completed both races in Portugal without going down.

Sherlock felt at home at both locations, as they had trails similar to Squamish.

"There's lots of steep chutes, it's loose and there are lots of ruts. It's pretty similar to a lot of stuff in Mamquam," he said.

That said, between snow at Leogang and mucky conditions elsewhere, the season was hampered by weird weather as racers competed later in the autumn than normal. Sherlock said it was "sketchy" but he made it through.

"If you race better in the dry, you were just kind of screwed, and I kind of fall into that," he said. "We ride a lot of wet here in B.C., but it's not the same sort of thing. It's a lot slipperier out there."

Though it was an absurd season, Sherlock has some takeaways. He noted that learned a lot from Intense Factory Racing teammates like five-time World Cup overall champion Aaron Gwin and U.S. national champion Neko Mulally.

"I felt like I was getting into it by the end of the trip, but it ended by the time I was getting going," he said. "I've definitely got the next steps figured out for training, what I'm going to do for races in the future and take care of myself."

As for the pandemic element of the trip, Sherlock was happy with the protocols in place, as he was tested once a week and never at any point was overly concerned about exposure to the virus.

"I had a slight cough at one point and I was thinking, 'Ooh, I'm about to get stuck in Europe for two weeks,'" he said. "Then I got the COVID test after that, negative, so it was a bit of a relief."

Opinion: What it’s like learning how to develop a sport climbing route
May 4, 2021 5:38 PM
Comments