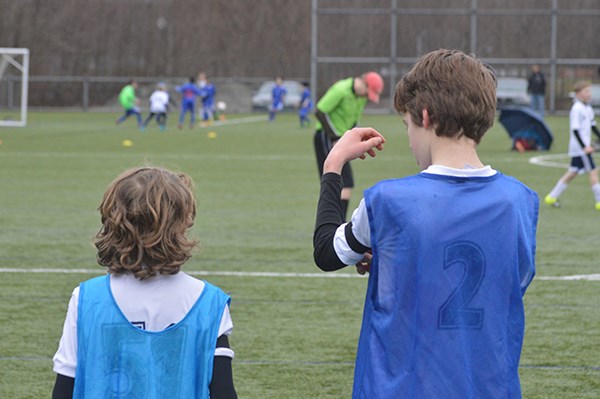 One of the U12 players adjust his armband during a match Saturday morning.Mike Chouinard

As they took to the pitch Saturday morning, coach Tim Sjogren’s U12 selects team put black bands on the arms to wear in their home game against Richmond.

They were not alone, as other local teams repeated the gesture at games throughout Squamish.

“They’re all wearing them this weekend,” said Sjogren, who also serves as president of the Squamish Youth Soccer Association.

The act was a subtle way of showing solidarity with one of the association’s own. It is common in the ranks of soccer clubs for team’s to wear the bands to remember the death of a current member or alumni, usually at the first home match to follow.

Following the seasonal break and some weather-related delays, the local association decided to have the teams wear the armbands for their first home games, which were held this weekend.

The act was in honour of longtime soccer fixture Jose Oreamuno, whose son Cristian, 41, died in an accident shortly before Christmas.

Oreamuno is currently a director on the association’s executive, coordinates officials as head referee and volunteers for other association activities, as he has for many years.

Ray Christensen, the vice-president of the SYSA, grew up with Cristian and knows the family well. All of the children, he said, played soccer growing up.

“All four of the kids went through Squamish Youth Soccer,” he said, adding that the next generation is coming into youth soccer now.

Christensen said the gesture was not mandatory but left up to individual teams, adding that any on the road the past weekend may wait until their next home game.

Rather than focus on the tragedy, Christensen would like the armbands to pay tribute to the family and how much the father has meant to the organization.

“It was showing a sign of respect to Jose,” he said. “He’s a big cog in the system.”

Having spent a lot of time with the family growing up, Christensen knows the importance of soccer for the family.

“It’s a big part of their life and culture,” he said.

On a personal level, Christensen said that both he and Sjogren are relatively new to the executive for the association, having been there for only a few years, and that Oreamuno has been helpful to them as a voice of experience on the organization’s operations.

Sports, he added, are a good way to teach children about the value of teamwork and the importance of dealing with adversity in life, so the act of wearing the armband fits in with the values they want to instill in young players on and off the pitch.

Ultimately, the association wants to send the message that it appreciates how much the Oreamunos have meant to youth soccer, especially in light of how much time volunteering takes and how crucial it is for organizations like the SYSA.

“It’s a soccer community, a soccer family,” he said.