Soccer player off to U16 nationals 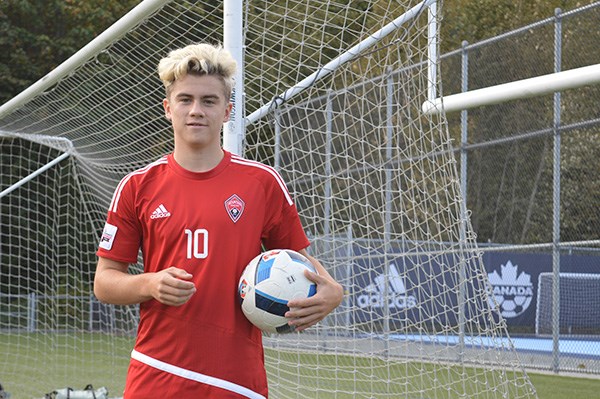 Stuart Loop and his teammates are off to Alberta this week for the U16 nationals.Submitted

Stuart Loop grew up playing soccer in Squamish, but he is now moving on to a bigger stage.

Now 16, he has been playing for Mountain United in the B.C. Soccer Premier League. This week he and his teammates will be vying for a national U16 championship.

The squad is in Lethbridge, Alta., to take part in the U16 Cup for the Sport Chek National Championships, which started Oct. 5 and runs through Oct. 10.

“This’ll be the biggest tournament I’ve ever been to,” he told The Squamish Chief last week.

In June, the team qualified for the nationals after beating Vancouver Island in a semi-final and handing Coastal FC a 4-0 loss in Kelowna in the finals to take the provincial title.

“Then we got our national berth. We got seeded first in the country,” he said.

Loop began playing soccer in U7 as a five-year-old in Squamish. He played a couple of years of recreational league before moving up to the select squad where he became captain of the Squamish gold team. He then moved onto Metro League where he played in West Vancouver. There he was captain and team MVP. He also attended Sentinel’s soccer academy in West Vancouver.

For the last three seasons, he has played with Mountain United.

In the meantime, he is doing self-guided studies for his education, which means a lot of discipline when it comes to balancing soccer with school. For example, he had to bring along his schoolwork when he attended a major tournament in Las Vegas. Still, he is able to maintain first-class honours.

To get to the nationals, the players received some support from Soccer Canada and the B.C. Soccer Association, as well as from Mountain United, itself, and some of the soccer associations in the region covered by Mountain. The team also raised close to $500 during a fundraiser in Squamish at Mag’s 99 restaurant.

As far as their chances at the nationals, the B.C. squad is the team to beat, at least according to the seeding. Overall, the top-ranked team is in a pool with Newfoundland, New Brunswick, Alberta and Manitoba. They will play the other teams in the pool in a round robin format. Each team will be reseeded into brackets for knockout games based on their round robin showing, and Loop hopes the B.C. team will be playing for the top prize.

Most of the other teams have only just finished their play and recently qualified, whereas the B.C. leagues wrapped up in June. Loop is not sure whether this will be an advantage or disadvantage when it comes to the tournament, though the team started its new season a few weeks back.

“It feels weird to be seeded number one,” he said, “They’re going to be hyped… I feel like we’re going into it with a different attitude.”

The team did lose a few key players in the off-season to residency with the Vancouver Whitecaps’ developmental team, but they will be augmented by players returning from injury or promoted from Mountain’s younger ranks.

Canada Soccer is streaming broadcasts of select games from the U16 championships this week as well as games from U14 and U18 championships. For more information, see www.soccercanada.com.