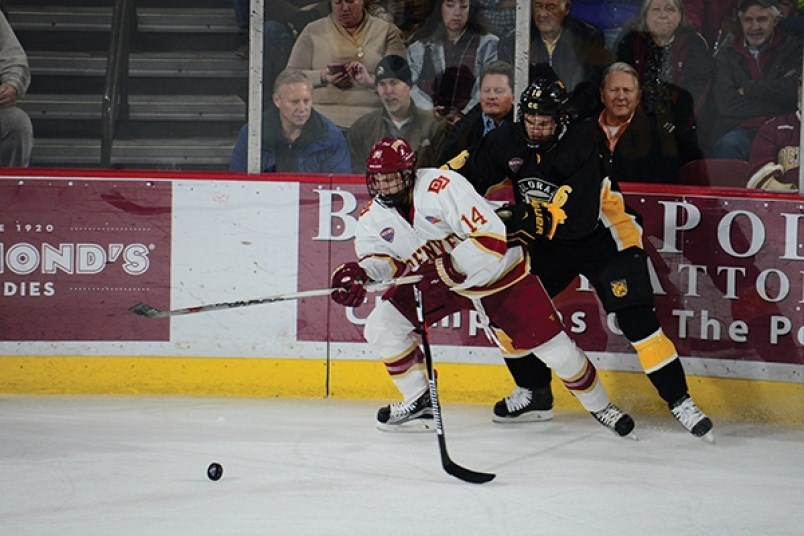 Squamish’s Jarid Lukosevicius (14) digs for a puck in the corner in a game playing for the Pioneers, against Colorado State.file photo/Submitted

At the professional level, two Squamish players are set for action this winter.

Jarid Lukosevicius is preparing for his second season with the Grand Rapids Griffins of the American Hockey League.

The right winger scored six goals and two assists while recording 29 penalty minutes in 29 games with the Detroit Red Wings' top affiliate in 2019-20.

Lukosevicius also suited up for one Griffins playoff game in 2018-19 after completing his NCAA career with the University of Denver in which he scored 62 goals and 105 total points in 158 games over the course of four seasons. Lukosevicius' career included scoring a hat trick in the NCAA championship game to lead Denver to a title of University of Minnesota-Duluth in 2017.

In a message to The Chief, Lukosevicius said he's feeling ready to take a step forward after making the most of the downtime since the AHL shut down in March and, unlike the National Hockey League, did not return to crown a champion over the summer.

"I'm really looking forward to the AHL, feeling humble and confident," he said. "I've had a lot of time to improve on all aspects of my game."

Lukosevicius said he sought to learn as much as he could in his rookie season from a coaching staff that included NHL veterans in head coach Ben Simon and assistants Todd Krygier and Mike Knuble.

"I have tried to be a sponge and learn from everyone," he wrote.

Meanwhile, defenceman Josh Thrower is already in action, having played two of three Southern Professional Hockey League games for the Knoxville Ice Bears. Thrower has accumulated an assist and seven penalty minutes as the Ice Bears have started with a 1-2 record as of Jan. 15.

His older brother Dalton, meanwhile, appeared as though he was going to head back for a second season with the East Coast Hockey League's Jacksonville Icemen, signing a contract back in September. However, the elder Thrower was released in November. The North Shore News reported that he's recently lent a hand to the North Vancouver Wolf Pack of the Junior 'B' Pacific Junior Hockey League as a guest coach.

The Wolf Pack boast two locals in defenceman Noah Malthaner of Squamish and forward Ryan Hunter of Brackendale. North Van had a 2-3 record when the season was suspended following Nov. 7's games. BC Hockey announced the cancellation of the Cyclone Taylor Cup, the provincial Junior 'B' championship, on Jan. 5.