Thiel leads on and off the court 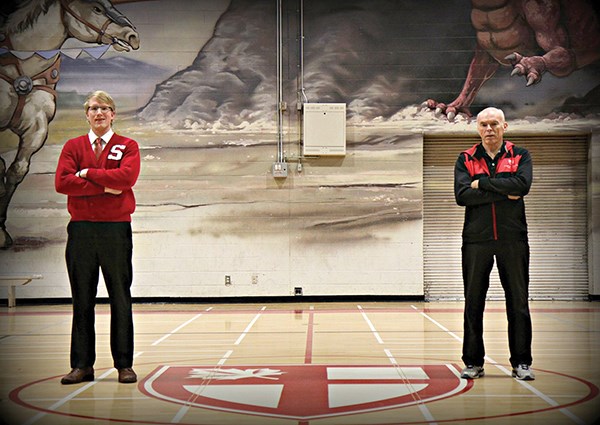 Brodan Thiel (left) has been guided by one of the most revered coaches in the province, Bill Disbrow (right) of St. George’s School.Submitted

Twenty-five minutes is all Brodan Thiel could spare.

But that was more than enough to catch up with one of the more eccentric characters the Quest Kermodes have seen in their nine-year existence.

Thiel, donning a cut-off shoulder length jean jacket, reverse snapback and retro Penny Hardaway sneakers, was never afraid to let his hair down in his playing career at Quest (2010 – 2013) and three years later – meeting at a Vietnamese food shop in Vancouver’s Harbour Centre – not much has changed.

“Miami Dolphins, baby,” he says, grabbing and smiling at his jersey upon greeting.

If you didn’t know him, on this day you may suspect Thiel had just come from an all-night 1990s-themed party binger. He’s actually about to teach at Alexander Academy – an international private school on West Hastings – in moments.

During his playing days, the flamboyant power forward was branded by many Pacwest opponents as a boorish, reckless irritant out to wreak havoc and rack up wins by whatever means necessary. (There is a Youtube video chronicling his days at Quest at www.youtube.com/watch?v=6tHdgB_YJU8.)

Standing outside Alexander however, that characterization rings hollow. He greets by-passers, jokes with students about detention and even chats by the door so he can hold it open for others during his lunch break.

For Thiel, he says the change in character was an ever-going process, initiated after many days of self-reflection in Squamish.

“My dad was not adequate to teach me life lessons, my mom did what she could but something was missing from that.”

As a full-time teacher, the 28-year-old has found many things that eluded him for much of his difficult upbringing – security, income, and stability. But for the six-foot-four former ball player, the most significant step he has taken – and the thing that has driven him since Quest – can’t be quantified tangibly.

This past September, after five years of involvement with St. George’s Secondary, Thiel was appointed the head coach of the Saints’ Grade 8 boys’ basketball team and basketball coordinator. With an overall 76-15 record (19-5 this year, as of the end of last month), the blond-haired coach has had his name gain some traction around Metro Vancouver.

But most important to Thiel is the fact that he has been given the opportunity to teach young impressionable males, something he’s been working toward for years.

“I remember I was at my softball playoffs and I broke my wrist and needed emergency surgery the night before a tournament in Vegas,” Thiel said, reflecting on a past experience with Basketball BC. “I actually wanted to leave without surgery because I didn’t want to let the kids down.

“I got rushed out in the end at 5 a.m. and made it on an all-nighter but that’s how important I see this (role of mentorship). It’s serious for me.”

The Saints boast a steady overall basketball program, with all teams (Gr. 8-12) hovering in, or around, the top 10 in B.C.’s provincial rankings.

“He’s definitely passionate,” said Disbrow, winner of five B.C. provincial championships. “He brings an awful lot of energy to it and he truly wants to be an outstanding coach. He cares deeply about the kids’ development and that’s a big step and not necessarily a given in B.C.”

And although – with his rugged past and colourful personality – Thiel may be an unconventional addition to the prestigious St. George’s coaching tree, Disbrow, now 40 years deep into his sideline role, says he sees plenty of potential in the former Kermode moving forward.

“Brodan shouldn’t try to be me,” he said. “I’m naturally a bit more calm but we all have to be who we are. Otherwise, we wouldn’t be successful.

“He has a real ability to connect with the kids and he’s on his way to just that – success.”