Squamish Strikers take open final against Chaos on women’s side
Apr 20, 2016 10:07 AM By: Mike Chouinard 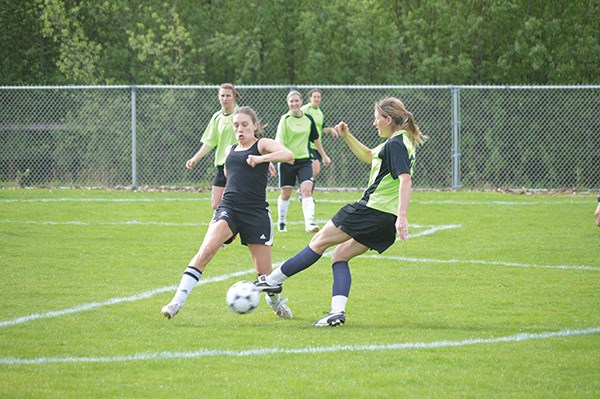 Soccerfest has been a Squamish institution for more than 35 years.

Last weekend, local and visiting teams took over the pitches at Brennan Park for the latest installment of the two-day tournament.

In total, 38 men’s teams and 30 women’s teams signed up for the event, with games taking place over the weekend in different age brackets: men’s open, men’s over 30 and men’s over 40, ladies’ open, women’s open rec and women’s over 30 rec. Many of the teams compete in the Vancouver Metro Soccer League.

“Most of the teams are from the Lower Mainland,” said Dave Harrison, one of the organizing committee members. “No premier teams allowed. It’s first division and down.”

The men’s open was the final category to be decided Sunday, and in the end it was the Squamish Thunder that came out as champs, beating the Coasters team in a close 1-0 match. The game went right down to the end, with the Coasters throwing everything they had at the Thunder net and the Thunder countering with a long shot that glanced off the cross bar.

The Thunder had snuck into the semi-finals with the fourth most points from the round robin stage but managed to advance to the finals.

In the other men’s brackets, Serbia beat the Coasters 3-2 in the over-40 group, while in the over-30 group, the VUWS Rangers shut out Shaheen 4-0.

On the women’s side, the Squamish Strikers went into the playoff round first on points in the open category and kept winning, taking the final against Vancouver Organized Chaos 4-2.

The men’s and women’s tournament, which featured several local teams, has been held continuously every spring but for a blip two years ago when weather forced the cancellation. This led to questions about whether teams would return.

“It was hard having it cancelled. We weren’t sure if we were going to get them back,” Harrison said, “but they’re back.”

The event started in 1980 with 20 teams playing games of five-a-side and grew over the years.

“It’s one of the longest running tourneys in the province,” Harrison said. “It’s unique in that we’re non-profit.”

The tournament not only brings revenue into the community through visitors, it helps generate funding for facilities like sports fields as well as scholarships for high school students.

“It’s one of the events that is important to the community,” said Jose Oreamuno, another organizing committee member.

The organization also had a hand in raising money for the turf, and the members would like to see the fields expand for the tournament and the community as a whole.

“We’d love to get a second turf field.”