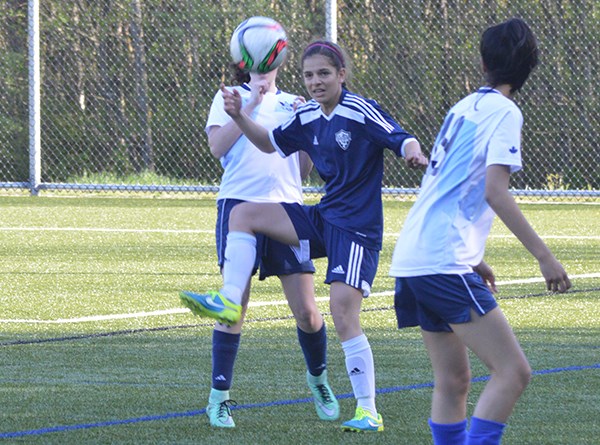 Sonia Mancera tries to get control of the ball during the Coastal Cup.Mike Chouinard

Squamish’s U17 girls’ team is moving on to the semi-finals in Coastal Cup soccer following a one-sided win Sunday.

It hosted VAF Phoenix, a Vancouver side that had beaten it in the league championship back in late February.

At Brennan Park’s turf Sunday afternoon though, Squamish was clearly the aggressor from the start. The front-line players constantly pushed Vancouver on the back foot.

Squamish opened the scoring inside of 10 minutes when Kyley Rosser hit the post on shot from the wing and Sonia Mancera was in position to tap in the rebound.

The home team kept up the pressure for much of the first half, as Lauren Petryshen fired one off the post while another apparent goal was called off due to a handball. As halftime approached though, Rosser fired a perfectly placed long-range bomb over the keeper’s head off a long free kick taken not far from midfield.

Moments later, following a throw-in the fleet-footed Tanya Fearon wove through the defence and cut toward the goal to fire in a shot that gave Squamish a 3-0 lead.

In the second half, the Squamish offence was not able to add to the lead but did not need more goals, as it continued to apply most of the pressure.

The back line was strong for most of the match, never really allowing the Vancouver team much in the way of scoring chances, and when there was a breakdown, keeper Chloe Moberg cleared loose balls, acting as kind of sweeper to break up any chance for Vancouver’s offence to strike. Moberg had already been chosen by the Squamish Youth Soccer Association as keeper of the year the day before, and the team presented her with her trophy after the match.

Coach Brent Williston was pleased with his players’ efforts and how they were the aggressors throughout the match.

“The work rate was huge,” he said. “We were relentless.”

He has also been pleased with the progress they have shown during the year.

“They seem to be getting stronger as the season goes on,” he said.

Earlier on Sunday on the turf, the U15 girls saw their strong season come to an end.

The team hosted Langley United in a quarterfinal, and for much of the first half Squamish was pinned in its own end by the aggressive forwards of Langley.

When Squamish tried to move the ball, the visitors were able to win the battles in midfield to hold much of the possession. The locals fell behind early in the first half and when they let in another early in the second, it looked like the game was out of reach.

Harman Cheema was able to cut the Langley lead, though, when she beat the defence and keeper with a low ball. She and her teammates kept up the pressure and looked like they might tie up the game, but Langley fought to keep a ball in play and move it upfield to finish the scoring at 3-1.

Coach Nicole Hoskin was disappointed the season had come to an end but credited the strong Langley opposition for the win.

“The team was intense. They were the first to the ball and they definitely had some finish,” she said.

Still, she was happy her U15 team had gone as far as it had in Coastal Cup play and racked up only three losses over 17 games this season.

“We made it to one of the top eight teams in the Lower Mainland district,” Hoskin said. “Every game we had was a bonus since March.”

Opinion: What it’s like learning how to develop a sport climbing route
May 4, 2021 5:38 PM
Comments