Weiland heads to the pitch for Mountain FC 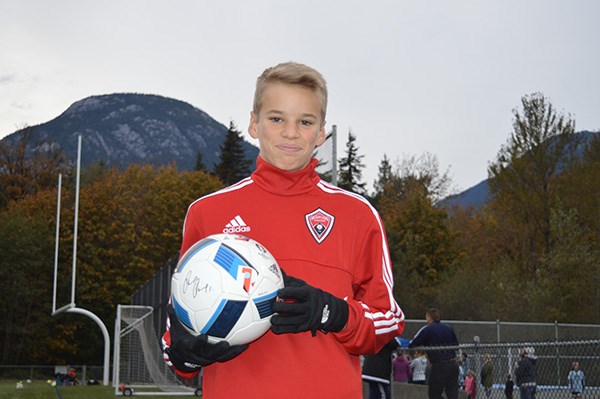 Squamish’s Michael Weiland has moved up to play with Mountain FC this season.Mike Chouinard

A local aspiring soccer star is getting the chance to move up to play in the BC Soccer Premier League.

Michael Weiland, 13, has joined Mountain FC, a club in the league that represents young players from Burnaby, North Vancouver and West Vancouver.

“This is the best kids of this age group,” says his father Peter, who is head coach for Squamish’s soccer programs.

Last season, after playing all his youth soccer in town, he moved up a level in North Vancouver in the Metro level. By spring, he started working out with the higher-tier Mountain FC. The club assesses players based on their games at the lower tier.

“I was already practising with them once a week,” he says. Mountain FC and the Premier League help feed the Vancouver Whitecaps developmental team. Wieland found out just before summer that he had been asked to joining Mountain FC’s U14 team for the season.

“I found out before everyone else,” he says.

Now, Weiland practises in the city with the team three times a week to prepare for matches on Saturdays.

While the season is young, the team did take part in the SX International Coup over the Labour Day weekend, in which teams from as far as Seattle and the Yukon came to Surrey to face top competition. The event helped give an indication of what other top players in the age group are like.

His son’s promotion is a good sign for local soccer, Peter Weiland says, that local players are developing the skills locally and able to move up to higher competition in a league that covers more of the province.

He is not sure about the logic of sending away players during their earliest years to play in the larger competitive leagues, but he realizes it makes sense when players are nearing their teen years to play in the bigger leagues to help their development. Staying at home becomes harder because it is not yet manageable for Squamish to field teams in the higher-tier leagues.

“That’s our challenge here in Squamish,” he says. “We just don’t have the numbers.”

Still, by coaching the coaches, the local association can develop players like Michael to move up to higher tiers, and Peter has worked to create opportunities for coaches at all levels and age brackets to take courses. This, in turn, helps the coaches turn the kids into better players.

“We have talented kids here,” he says.

It also helps to have relationships with Quest University or the Vancouver Whitecaps. This year, the association trained 40 coaches. In turn, a key for the coaches is to make sure kids get enough touches on the ball when they are young rather than focus on things like fitness or endurance.

“At this age, it often comes down to how often you touch the ball and having some fun,” he adds.

The game has become so technical, he says, that it is the players who have learned proper skills that will most likely move up. He points to a number that have gone up to Metro or a few, like his son, making the further move to Mountain FC.

For Michael, such development meant working on attributes such as juggling the ball or good field vision. He started playing at age four with his older brother Tom and soon joined the Squamish Youth Soccer Association. His favourite professional is the German power Borussia Dortmund, and his favourite player is their star Marco Reus.

Already, he’s made a few star turns of his. He recalls one game when he was still playing in U12 when he puts his skills to use for a memorable goal.

“I remember in U12 I juggled the ball over a defender and scored by chipping the goal over the keeper,” he says.