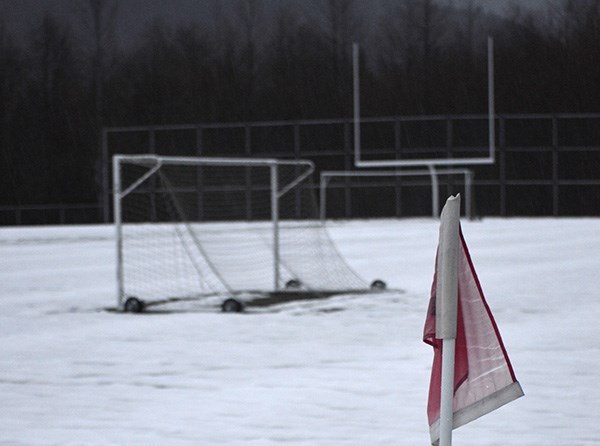 The soccer association is concerned about what effect snow might have on the pitch over the long term.Mike Chouinard

Much of the time when it snows here, rain or mild weather is soon to follow, melting much of the white stuff.

This winter, though, the snow stuck around for longer than expected, including one place it was not welcome – the turf field at Brennan Park.

Through most of January, the artificial surface field was blanketed by snow.

The snow meant the cancellation or postponement of some Squamish Youth Soccer Association games, which vice-president Ray Christensen said is not acceptable, especially for the select level teams needing to schedule in games deeper into their campaigns.

“Cancelling games and not practising have a huge impact,” he said. “Most of our teams are playing for points.”

Most teams did not start playing home games in Squamish again until the first weekend of February.

Christensen said the association has been talking with the district about a solution for these situations.

“We need to work together and figure out something,” he said. “All I’m trying to do with the district is create a dialogue…. The whole idea of an artificial turf field is to play games all year-round.”

Tim Hoskin, director of recreation, responded that the district appreciates that the teams want to get back on the field for scheduled games as soon as possible.

“At the end of the day, we all see the value in getting the kids on the field.”

Also of concern to the soccer association is the potential effect that snow sitting for a length of time could have on the surface. Christensen said it could flatten the turf and affect the quality of the surface, which can reduce its life and require expensive resurfacing earlier.

“The district has an asset in that field,” he said.

Christensen said there are ways to clear the snow yet reduce the risk of damage, such as adding PVC piping to shovels to clear. Even reducing the depth of the snow to leave a thin layer of snow on top can help by promoting faster melting.

The association, however, is hesitant to go clear the field without working out a plan with the district.

“We are waiting for that dialogue to happen,” he said.

Hoskin said he knows there are ways to remove the snow while reducing the chance of damage during clearing, although he added that the best tactic is to let the weather take care of the work.

“The best possible solution is to let the snow melt naturally,” he said.

Beyond this, the next best method is to clear the snow by hand, with PVC pipe on the ends of tools to reduce impact.

Hoskin said the district has met with soccer users to discuss the field and it could possibly provide equipment while the association could provide people to help clear the pitch.

As to the effect of wear on the field, Hoskin said he has heard from the manufacturer that the snow sitting on the turf should not affect the turf’s lifespan. “The artificial turf fields are designed to withstand harsh winters,” he said.

An article from the website Pitchcare.com states that the synthetic turfs are playable in most weather but that it is a mistake to assume that they are “all-weather.”

The article covers various weather problems and ways of dealing with them, recommending that any attempt to clear snow should be done early on before the snow has any chance to melt and refreeze, at which point any attempt to remove ice would damage the pitch.